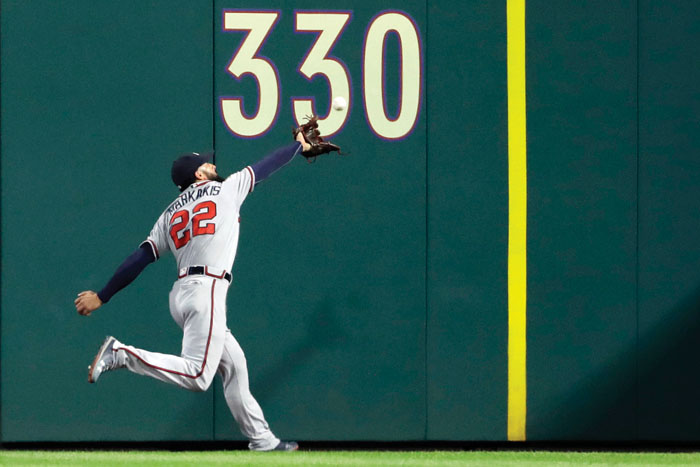 Atlanta Braves right fielder Nick Markakis catches a fly out by Philadelphia Phillies' Rhys Hoskins during the fourth inning of a baseball game, Wednesday, May 23, 2018, in Philadelphia. (AP Photo/Matt Slocum)

The Phillies took two of three to win their first series against the NL East-leading Braves in four tries and closed within a half-game of first place.

Arrieta (4-2) allowed seven hits and lowered his ERA to 2.45. The 2015 NL Cy Young Award winner showed exactly why the Phillies are paying him $30 million this season.

“The reason we got him is because he can go through one of the best lineups in the league three times,” Phillies manager Gabe Kapler said. “Never once did we feel he wasn’t in control.”

Even though it’s only May, Kapler called it a “big game” hours before first pitch.

“It felt a lot different,” he said.

Seranthony Dominguez retired the four batters he faced after entering with runners on second and third in the seventh. Hector Neris pitched the ninth to complete the eight-hitter.

Braves starter Luiz Gohara (0-1) gave up two runs and four hits in four innings in his first start of the season.

Gohara retired the first two batters in the third before Rhys Hoskins walked, Odubel Herrera reached on an infield single and Aaron Altherr walked to load the bases. Santana beat out a slow roller to third to give the Phillies a 1-0 lead.

That’s all Arrieta and the bullpen needed.

“It’s shaping up to be a good division and we have to play good ball,” Arrieta said.

Arrieta escaped a jam in the second after the Braves put runners on second and third with no outs. Ender Inciarte led off with a single and Johan Camargo hit a double. But Dansby Swanson grounded out to third, Gohara struck out and Ozzie Albies bounced to first.

“That’s just a situation that determines that outcome of the game for me,” Arrieta said. “It’s an opportunity to preserve the game and I was able to get past that.”

The Phillies had two shutouts in the series, holding Atlanta to three total runs, only one of which was earned.

Since 1913, it was just the eighth time Philadelphia recorded at least two shutouts and allowed one or no earned runs in a series of any length, and just the second time since 1966. The other was at Los Angeles on June 9-11, 1995. Four of the team’s six shutouts this season have been against division opponents.

The Braves are 7-5 vs. the Phillies this season, but the teams won’t play again until they meet seven times in September during the final two weeks.

VERLANDER GETS SOME RUN SUPPORT AS ASTROS TOP GIANTS

HOUSTON (AP) — Justin Verlander got some run support for the first time in nearly a month and led the Houston Astros over the San Francisco Giants 4-1 on Wednesday.

Verlander (6-2) struck out nine and walked one in six innings, allowing one run and three hits as his major league-leading ERA rose slightly to 1.08. He had given up just three runs over 29 innings during his previous four starts, but the Astros had scored just three runs in that span, getting shut out twice.

Ken Giles pitched the ninth to remain perfect in nine save chances.

Brent Suter (4-3) allowed two runs and four hits in 5 2/3 innings as the NL Central-leading Brewers moved a season-high 12 games over .500. Milwaukee’s 31-19 start is the team’s best over 50 games in franchise history.

Arizona has lost 13 of 14, falling out of the NL West lead while scoring just 26 runs in that span. The three games marked the Brewers’ first sweep of the Diamondbacks since June 2-4, 2008.

ST. LOUIS (AP) — Drew Butera had a two-run single in the 10th to lead Kansas City past St. Louis.

Butera’s RBIs were his first since May 2. Jon Jay followed with an RBI single as the Royals won their first series since taking three of four from Detroit May 3-6.

Blaine Boyer (2-0) pitched a scoreless ninth for the win. Kelvin Herrera earned his 10th save with a perfect 10th.

Bud Norris (1-1) pitched a perfect ninth, but couldn’t record an out in the 10th, giving up back-to-back singles to Jorge Soler and Alex Gordon before compounding the issue by committing an error on Alcides Escobar’s sacrifice attempt to load the bases ahead of Butera.

Ross (4-3) didn’t allow a runner past second base until the seventh, struck out nine and yielded one run in 6 2/3 innings. Brad Hand recorded the final five outs for his 15th save, escaping a two-on, one-out jam in the ninth by inducing Spencer Kieboom to ground into a game-ending double play.

MINNEAPOLIS (AP) — Michael Fulmer won for the first time in four starts, Niko Goodrum ended an 0-for-14 skid with a home run and Detroit stopped a five-game losing streak with a win over Minnesota.

Fulmer (2-3) allowed one run and four hits in 5 2/3 innings with five strikeouts, improving to 4-0 against Minnesota as he threw a season-high 112 pitches. He had lost his previous three starts, allowing 14 earned runs in 16 1/3 innings.

Plutko (2-0) struck out four and walked four in his second major league start. The right-hander was promoted from Triple-A Columbus to replace the struggling Josh Tomlin in Cleveland’s rotation.

Michael Brantley, Francisco Lindor and Rajai Davis had two hits apiece as the AL Central leaders won for the third time in four games. The Indians completed a sweep of their two-game set versus the Cubs in their first appearance at Wrigley Field since they lost the 2016 World Series.

Chicago’s Jon Lester (4-2) allowed six hits, struck out four and walked one while lowering his ERA to 2.37 in his 10th start this year.

ARLINGTON, Texas (AP) — Jurickson Profar had a bases-clearing double to put Texas ahead to stay in a wild, series-clinching win over New York, which matched a major league record with four more homers.

Gleyber Torres became the youngest Yankee ever to homer in three consecutive games and Aaron Judge hit a 471-foot blast as New York became only the third team in major league history with 21 homers in a five-game stretch — 12 of those in Texas. Didi Gregorius and Neil Walker also went deep for the Yankees.

Torres and Judge both homered during a six-run fifth to put New York ahead 10-5. The Rangers then scored twice in the bottom of the fifth, and an inning later got Profar’s three-run double to make it 11-10 after reliever David Robertson (3-2) had already given up a bases-loaded walk.

Jacob deGrom dodged trouble throughout seven scoreless innings and Brandon Nimmo homered in the fifth for the Mets, who carried a slim lead into the ninth. But the Marlins broke through against Familia (2-2), who has four blown saves in 17 chances this season.

Familia was booed by the crowd of 24,808 after Castro’s hit and again when he got out of the inning.

Bogaerts doubled off Alex Colome (2-5) to drive in J.D. Martinez, who reached on a throwing error by shortstop Willy Adames to lead off the ninth. After a wild pitch, Eduardo Nunez drove in a run with a sacrifice fly, and Boston tacked on another on a passed ball.

Price pitched three-hit ball over six innings, allowing a run while striking out nine. Joe Kelly (3-0) got the win and Craig Kimbrel pitched the ninth for his 15th save.

Ross (4-3) didn’t allow a runner past second base until the seventh, struck out nine and yielded one run in 6 2/3 innings. Brad Hand recorded the final five outs for his 15th save, escaping a two-on, one-out jam in the ninth by inducing Spencer Kieboom to ground into a game-ending double play.

In his season debut for the Nationals, Erick Fedde (0-1) allowed three runs and four hits while striking out six in 5 2/3 innings.

CINCINNATI (AP) — Josh Harrison tripled in the go-ahead run off Dylan Floro (1-1) in the 12th inning — his fourth hit of the game — and Pittsburgh rallied after wasting a late lead.

The Pirates blew a three-run lead in the eighth before rallying to end their four-game losing streak.

Left-hander Steven Brault (4-1) pitched two innings. Kyle Crick escaped a bases-loaded threat in the 12th for his first career save, retiring Brandon Dixon on a grounder to end it.

MINNEAPOLIS (AP) — Michael Fulmer won for the first time in four starts, Niko Goodrum ended an 0-for-14 skid with a home run and Detroit stopped a five-game losing streak with a win over Minnesota.

Fulmer (2-3) allowed one run and four hits in 5 2/3 innings with five strikeouts, improving to 4-0 against Minnesota as he threw a season-high 112 pitches. He had lost his previous three starts, allowing 14 earned runs in 16 1/3 innings.

Shane Greene pitched a perfect ninth for his 11th save in 14 chances, completing a five-hitter.

Goodrum, Nicholas Castellanos and Victor Martinez had two hits each for the Tigers.

Jose Rondon added his first major league homer as last-place Chicago rolled to its fifth win in seven games. Baltimore, last in the AL East, has lost four of five overall and is 5-21 on the road.