In the trenches: Walmart employee of 28 years: It’s all about the customers 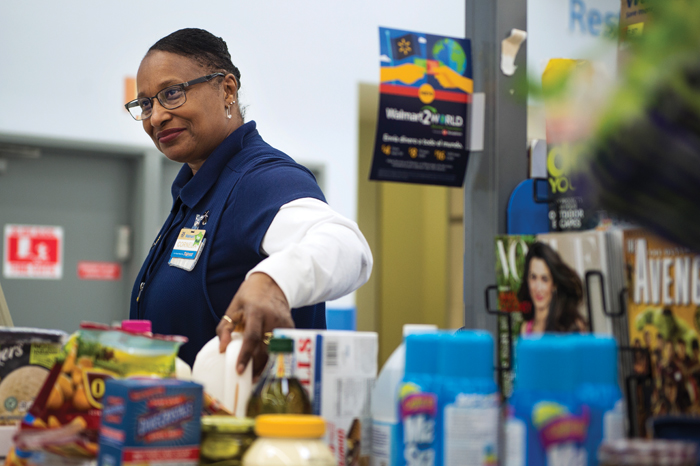 Cornelia Bush smiles at a customer while scanning food at the Walmart in Salisbury. Photo by Rebecca Benson

This is the first story in an occasional series, “In the Trenches,” featuring everyday working people.

SALISBURY — “If I’m picking a green pepper for online shopping, I get the prettiest one we have, just like I would want at home. If I’m getting an apple, I check it all over to be sure it’s perfect for them. The customer comes first.”

So says Cornelia Bush, the 28-year veteran cashier – and sometimes online shopper – at the Salisbury Walmart.

“Lots of kids come in,” Bush says. “I adore the kids! They come to me. They know me. I make myself known to everyone who comes to me. I may not know every name, but I know the faces. I just love my customers.

“It’s a privilege to work here. Through it all, 99.99 percent of the time, my days at Walmart have been good. Things change, people change, companies change. That’s life.”

She started at Walmart on Dec. 6, 1990, before the new store opened on Jake Alexander Boulevard.

She can hardly believe she’s been with Walmart 28 years.

Walmart publishes a book every year recognizing employee anniversaries. She’s got hers.

She also has a big stash of service pins. Bush is named Employee of the Month just about every year.

“We get plaques for Associate of the Month. Girl, don’t talk about the plaques! They’re stacked up. We get a pin every five years, and they acknowledge your birthday and anniversary.

“At one time, I helped with applications for credit cards. I got so many applications in they cooked me a steak dinner. Just for me. They cooked it out back. That was very nice.

“I’ve always done things with not expecting much. If I was given something to do, God wanted me to do it. If I got a thanks, that’s OK.”

Bush has nine brothers and sisters, all in Virginia, and they’re all close. Family ties are important to her.

“I’m old school. I was trained with 10 children in Lynchburg.”

She is direct and to-the-point.

Her fondest memory comes from a time when she chaired the store’s campaigns for Children’s Miracle Network. She organized fundraisers to support Levine Hospital: hot dog cookouts, musicals, spaghetti dinners. Walmart sent her and other associates to Levine Hospital to see what they were working for, and it made quite an impression.

“It was one of the best experiences ever. A blessing to see,” Bush says. “My own children were blessed; we didn’t have to go through what those children were going through. We saw the incubators, the helicopter, the activity room, the preemies you could hold in one hand. I was blessed to raise money for them.”

And there have been funny moments. “We laugh every day around here,” she says.

Bush is in extraordinary shape for her age. Her face is unlined and she sports some pretty serious biceps. She works out at Planet Fitness twice a week and walks on her lunch break twice a week.

She’s been married 29 years and has two adult children. One graduated from Catawba College, the other from Appalachian State Univerisity. She worked a second job in Livingstone College food services to get her son through ASU.

She has a bucket list of sorts that she wants to accomplish before she retires. She needs to pave her driveway. She’d like to do some remodeling to her home. She’s headed to Hawaii later this year and will attend the Essence Affair in New Orleans this summer with girlfriends.

Shane Owens, the local store manager, has nothing but kind words for Bush.

“Cornelia is one of the best cashiers I have,” Owens says. “I can hear her laughter across the store. Customers want her line. She knows them on a personal basis, and they know her. She’s just a joy to have around. I wish we could duplicate that type of customer service. We hope she stays 28 more years.”

Bush plans to stay for a while, at least.

“I get along with my customers. If the customer feels appreciated, he will come back. They are the main reason I’m at Walmart.”