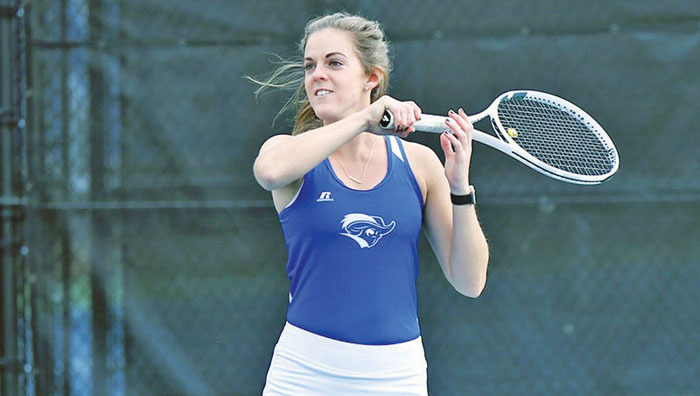 NEWPORT NEWS, Va. — When Alexandra Drye was at Salisbury High, she was a state champion who wanted to play tennis in college, but she had no idea where the right fit might be.

“There was a day my parents kind of surprised and said we were going on a college visit,” Drye said. “They took me to a school in Newport News, Virginia, that I’d never even heard of, but it was one of those things. I fell in love with everything about it immediately. I knew right away that it was where I was meant to be.”

That school was  Christopher Newport University, an institution with about 5,000 students and a glowing academic reputation.

As it turned out, CNU was the right spot for Drye. She never regretted her decision, never got seriously homesick. She graduated in four years — she received her bachelor’s degree in communication on May 12 —and she also had a chance to keep swinging a racket in a competitive setting. She won more than her share of matches in Virginia, Pennsylvania, Maryland —  and even California.

“Every spring break we went to California,” Drye said. “We played tough competition.”

Drye’s high school career couldn’t have gone any better. Salisbury won the 2A dual team state championship all four autumns she was on the varsity (2010-13). As a senior, she was Rowan County Player of the Year and Central Carolina Conference Player of the Year and she teamed with Madeline Hoskins to win the individual state doubles title.

Drye’s coordination isn’t surprising. She’s blessed with great athletic genes. Her late grandfather, Carl Drye, represented China Grove High in the 1955 Shrine Bowl before he headed to Duke to play football and baseball. Her father, John, was a standout fullback at South Rowan in the glory days of the Raiders. He was all-county in 1981 and signed with Furman. Drye’s mother, Lesleigh, was a Furman cheerleader. Alexandra’s paternal grandfather, the late James Carroll Clevenger, played football and tennis at Furman and Mars Hill.

Drye’s older sister, Carley, was Rowan County Swimmer of the Year in 2012. Her younger brother, Adam, was a good tight end for the Salisbury football team last fall, swam in the winter and was a key part of the tennis team’s recent run to the 2A state semifinals.

Drye had those genes and a successful track record going for her when she arrived at Christopher Newport in the fall of 2014, but there was a lot to learn. She came in with a big recruiting class of eight and everyone competed for roles.

“College tennis was just an enormous adjustment from high school,” Drye said. “The level of play was so much higher, and I was trying to juggle tennis with difficult classes and writing a lot of papers. After I finished my classes, I was going straight to tennis practice, so the biggest thing I had to learn was time management.”

She found her tennis niche, not surprisingly, in doubles. Drye loves doubles, always has. She carved out a spot  at No. 3 doubles as a freshman, then gradually worked her way up to playing No. 2 doubles. Eventually she and her most frequent partner, a girl from Nebraska named McKinney Harwood, made a lot of noise as a No. 1 doubles team. During her junior season, they became the first ever Christopher Newport doubles unit to be ranked nationally. They were 17th at the end of that season.

“I really enjoy doubles, I like connecting with a partner on the court, communicating and pumping each other up,” Drye said. “It’s especially fun when you’re playing doubles with a partner who is one of your best friends. That’s how Madeline Hoskins and I were in high school when we won state, and I was lucky enough to have that same kind of connection in many of my college matches. I was always surrounded by good coaches and good teammates.”

Drye was such a proficient doubles player that she finished her CNU career with 68 victories, tied for second place on the school’s all-time list. She also notched 30 career singles victories, usually competing at No. 5 or No. 6. Drye was a perennial member of Virginia’s Division III All-State team and made first or second team all-conference four straight seasons in the Capital Athletic Conference.

“It was a crazy four years,” Drye said. “I’m a little bit shocked by how well I did. My overall game improved so much.”

Drye’s tennis career ended when Christopher Newport lost to Mary Washington in the championship match of the conference tournament.

“We lost to them every year,” Drye said. “They were our biggest rivals, but those matches always were fun. It was a love/hate relationship. They pushed us to play our best tennis, and we pushed them.”

While Drye made her way smoothly on the tennis court, the academic side of things was more of a roller coaster. She made good grades, made the Dean’s List last fall, but when she went to Christopher Newport her plan was to major in business. Then she switched to biology. Then she changed to communication.

“I spent a lot of time in meetings with career advisors,” Drye said with a laugh. “But I just really wanted to find something I could feel passionate about and I did that. Changing majors twice put be behind, but I did the extra work, took the extra classes. I was able to catch up and graduate on time even with all the travel that was part of playing college tennis.”

Drye was in the the President’s Leadership Program at Christopher Newport. That meant a lot of extra meetings. It also meant volunteering in the community. Drye spent countless service hours assembling and distributing back packs of items at the local food bank.

She’s accepted a job offer, starting July 2, as an auto insurance underwriter and will be moving to Columbia, S.C.

But the month of June she can spend relaxing and reflecting on an outstanding college experience.

“It’s going to be weird not having tennis in my life every day,” Drye said. “But there was a lot of satisfaction as far as my college career. My class put in a lot of work and a lot of dedication. We transformed the program at Christopher Newport.”