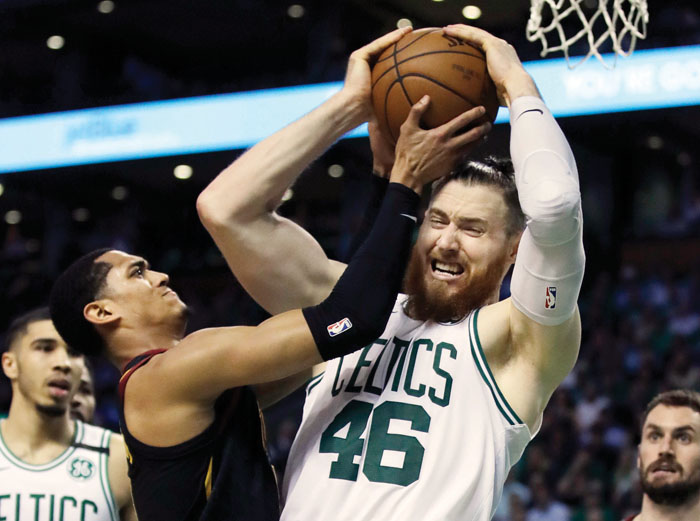 BOSTON (AP) — Rookie Jayson Tatum scored 24 points and Al Horford had 15 points and 12 rebounds to help the Boston Celtics beat the Cleveland Cavaliers 96-83 on Wednesday night and take a 3-2 lead in the best-of-seven Eastern Conference finals.

The Celtics remained perfect in Boston this postseason with their 10th straight victory at home and moved within one win of their first trip to the NBA Finals since 2010.

Game 6 is in Cleveland on Friday night, with the decisive seventh game back in Boston on Sunday if necessary. The home team has won every game so far in the series, and none has been closer than nine points.

“To do what we want to do we still have to beat this team one more time,” Celtics coach Brad Stevens said. “And it’s hard to do in the NBA.”

LeBron James had 26 points and 10 rebounds and Kevin Love scored 14 for the Cavaliers, who are trying to reach the finals for the fourth consecutive season. James has played to the end in seven straight seasons.

“Our focus, LeBron’s focus is to win,” Cleveland coach Tyronn Lue said. “That’s the only thing that matters.”

The Celtics opened a double-digit lead in the first quarter and nursed it the rest of the way, holding on through a four-minute scoring drought that saw Cleveland score nine straight points to cut the deficit to 83-71. But Terry Rozier hit Horford with an alley-oop to snap the skid, and that was as close as the Cavs would get.

James seemed to tire in the fourth, scoring just two points on four shots. He finished 1-for-6 from 3-point range in the game; the Cavaliers made just 9 of 34 attempts from beyond the arc and shot just 42 percent overall.

“He did look a little tired to me,” Lue said. “No concerns. You’ve got to be ready to play now.”

Jaylen Brown scored 17, and Marcus Morris and Marcus Smart each scored 13 as reserves. Tatum added seven rebounds, four assists and four steals one day after finishing one vote shy of a unanimous selection to the NBA’s All-Rookie team.

Boston went on a 15-3 run in the first quarter to turn a three-point deficit into a nine-point lead. The Celtics scored nine in a row at the end of the first quarter and into the second to take a 36-19 lead, their biggest of the game.

That’s when the Cavaliers fought back.

After a hard defensive play by Morris sent Larry Nance Jr. into the first row of seats, Morris appeared to wander over and say something. Nance to jump up and body checked him; Morris responded with a one-handed shove to the face.

Aron Baynes and Brown came in to break it up, and Terry Rozier put a body on Nance. After a review, the referees called technicals on Rozier, Nance and Morris. Kyle Korver made the foul shot to make it 36-20 and Cleveland went on a 9-0 run to cut the deficit to eight points, 36-28.

But Morris made a long 3-pointer to stop the scoring drought, and soon hit another to cap an 8-2 run that made it a double-digit lead.

Teams that win Game 5 to take a 3-2 lead in a best-of-seven series win 83 percent of the time. … James had 16 points, four rebounds and three assists at the half. Tatum had 13 points, and Horford had 10 points and seven boards at the break. … Baynes made his first start of the series, subbing for Morris. … It took until midway through the third quarter for a Cavs starter other than James or Love to make a basket. J.R. Smith sank a floater to make it 63-50, and George Hill followed with a jumper of his own.