Letter: We have the power to create solutions 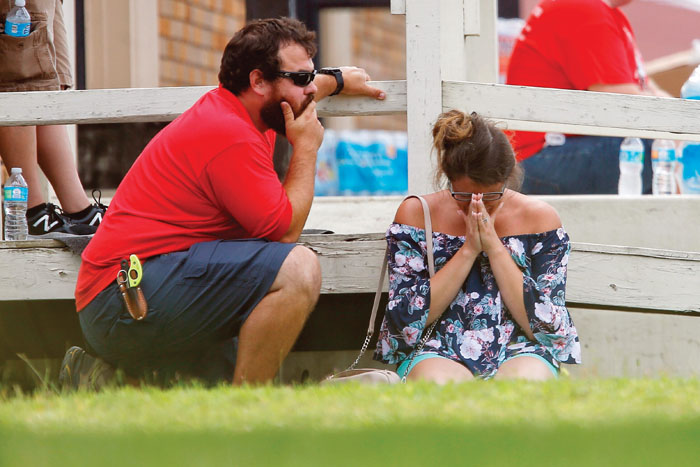 A woman prays in the grass outside the Alamo Gym where parents wait to reunite with their kids following a shooting at Santa Fe High School Friday, May 18, 2018, in Santa Fe, Texas. (Michael Ciaglo/Houston Chronicle via AP)

In my 60 years, I’ve lived through many historical moments: assassinations, moon landings, wars, domestic and external terrorism. I’ve heard passionate speeches that moved the nation to action: Kennedy’s inaugural address, Kings “I Have a Dream.” I’ve closely followed the stories of near and actual presidential impeachment.

America is currently suffering from a catastrophic failure of both its society and political culture. During a time of near record employment levels,the wealth gap between the top 1 percent and everyone else continues to widen. Opioids permeate our rural and urban areas. We live in the era of post-truth, alternative facts, fake news and racial tension. The rate of suicide among farmers is steadily increasing. Our politics has burrowed into a zero-sum game where everyone ultimately loses.

The most recent school shooting will provoke myriad questions. Is he from a dysfunctional family? Is he disassociated from his peers? Is he disenfranchised, at school, at home, in society? Is he disadvantaged? Is the firearm a tool used to express frustration coupled with disillusion? Before we throw technology, laws and everything else at school shootings, let’s ponder on these things.

There is hope. Americans always show grit in extraordinary times. Our incalculable imagination for solutions is the catalyst for change. Our freedom to change our nation rests in the restoration of the idea of “the general welfare.” This clause of the Constitution is what we make of it today. Our perspective in relation to our country should take on a different focus. We need to grasp the many issues facing our country, not the one. We need to seek service before self. We need to both show and demand higher levels of integrity at all levels. We need to exemplify excellence in all we do. “Yes We Can” affect change through positive popularism.