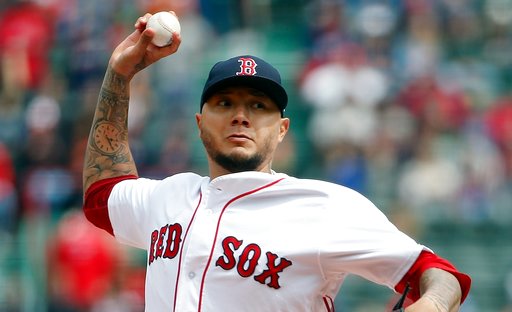 “God bless America!” I exclaimed to nobody, as the dog and cat watching the Red Sox game with me were napping.

Pitcher Hector Velazquez had induced a timely double play, ending an Orioles scoring threat. Short to second to first; that is, Tzu-Wei Lin (Taiwan) to Brock Holt (Texas) to Hanley Ramirez (Dominican Republic.) Velazquez himself was signed out of the Mexican League. The Orioles batter was Tim Beckham, an African-American infielder from Georgia.

I was definitely conscious of the irony. “America’s pastime,” they used to call Major League Baseball. Today, it’s an international game. Athletes immigrate from all over the baseball-playing world.

This season’s rookie phenom is the L.A. Angels’ Shohei Ohtani, a 23-year-old pitcher/designated hitter from Japan’s Nippon-Ham Fighters. Depending upon who’s pitching, Boston starts players from four or five countries every day. Many MLB teams do. The game’s among America’s most successful cultural exports.

And yet inside the base lines, nothing essential has changed. It’s still the same mesmerizing, endlessly fascinating sport I watched as a small boy perched on a bar stool in Elizabethport, New Jersey, sipping ginger ale while my Uncle Tommy, just home from the Army, drank beer and played shuffleboard with his pals. Babysitting, Jersey style.

I also played baseball, of course, day after day, year after year from age 8 until nobody had a uniform for me anymore. Over the years, I’ve participated in a number of competitive sports, but none has ever captured my imagination like baseball.

I was a pitcher back then. Win or lose, you never forget the feeling.

One of the best decisions of my life was to marry a baseball coach’s daughter. She gets it; always has.

Even so, to hear people tell it, the game is in trouble. Indeed, you rarely hear the “America’s pastime” trope used except ironically. Rather like my own, people say, baseball’s days are numbered.

“The greatest problem baseball confronts in the 21st century,” writes Susan Jacoby in her Yale University Press book “Why Baseball Matters,” “is that it derives much of its enduring appeal from a style of play and adherence to tradition very much at odds with our current culture … The demographic makeup of baseball’s typical television audience delineates the challenge: It has the oldest, whitest fan base of any major sport.”

That’d be me, all right.

And yeah, you read that correctly: Yale University Press. That’s probably symptomatic in itself. For Jacoby — whose 2008 book “The Age of American Unreason” lamented “a virulent mixture of anti-rationalism and low expectations” eight full years before Donald J. Trump ran for president — baseball’s presumptive decline is a consequence of the nation’s taste for cheap melodrama.

Never mind that the deciding game of the 2016 Chicago Cubs vs. Cleveland Indians World Series was the highest-rated televised game in 25 years. Fewer millennials, women and African-Americans are among the fan base. Jacoby blames “the profound dissonance between a culture saturated with devices that offer instant gratification and a sport that requires intense, sustained concentration from its fans.”

Intellectuals have worried over mass media’s bad effects upon the public mind since the invention of the printing press. I don’t recall that my youthful passion for the game was terribly sophisticated. Nor do you meet a lot of intellectuals in big-league dugouts. Baseball thinkers, yes, but that’s a very different thing.

Indeed, I’d argue that the main effect of electronic media upon baseball has been to make it more available and in vastly superior formats. Some years ago, the Cubs celebrated the 50th anniversary of Chicago baseball on TV by broadcasting successive innings in the style of each decade. The wonder was that anybody watched back in the black-and-white, ginger-ale, fixed-camera era.

Today’s high-definition broadcasts, with their close-ups, multiple angles, slow-motion replays and more knowledgeable commentary strike me as infinitely superior to the good old days. It’s also possible to mute the commercials or skip them entirely, so Jacoby’s correct that complaints about the games’ duration are a distraction. A 30-second pitch clock, limit meetings on the mound, why not? But no further.

You can learn a lot of baseball on TV if you pay attention, but you do need to pay attention. Jacoby’s definitely right about that. It’s possible to enjoy basketball or football without particularly understanding the rules. But watching baseball properly is more like reading a novel — precisely what I love about it.

Also, there’s no finer refuge from the crazy-making obsessions of the age than a well-played baseball game: three blessed hours in which one can be confident that he-who-need-not-be-mentioned, won’t be.

Get more kids playing, and fan demographics will take care of themselves.