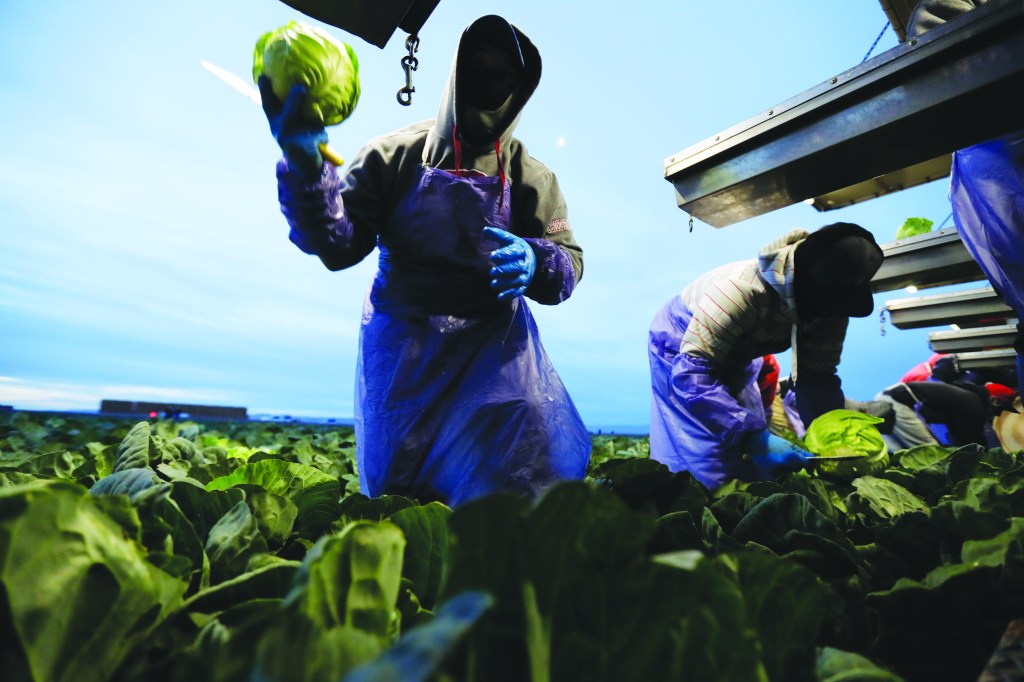 In this March 6, 2018 picture, farmworker Santiago Martinez, of Mexicali, Mexico, picks cabbage before dawn in a field outside of Calexico, Calif. For decades, cross-border commuters have picked lettuce, carrots, broccoli, onions, cauliflower and other vegetables that make California's Imperial Valley "America's Salad Bowl" from December through March. (AP Photo/Gregory Bull)

As members of Congress haggle over a new version of the farm bill and stricter immigration laws, farmers are nervously eying their fields and wondering who will pick the crops this year.

Congress should not make answering that question any more difficult than it already is. Lawmakers must streamline the process for bringing in much-needed farmworkers.

Immigrants are a key part of the agriculture workforce across the country. North Carolina is 6th in the nation in the number of migrant farmworkers, with about 150,000. By one estimate, Rowan farms employ about 1,000 migrant farmworkers a year.

Anti-immigrant sentiment, stricter laws and a tighter job market have led to a shortage of farmworkers to pick the state’s tobacco, cucumbers, sweet potatoes and other crops.

You might think this would open up jobs for unemployed U.S. citizens, but Americans don’t want to labor in the fields. And even when native unemployed people accept farm jobs, not many stick with it, according to the North Carolina Growers Association, which supplies manual laborers to North Carolina farms. In 2011, N.C. farmers hired 245 such workers referred to them through the association, but only 163 of them showed up to the first day of work, the association reports. Only seven lasted to the end of the growing season.

This situation is critical to the economy of this state, where agriculture has a $12.5 billion-a-year economic impact. North Carolina ranks first in the nation in farm cash receipts for tobacco and sweet potatoes; second for poultry and eggs; and third for pork and trout.

That requires a lot of workers.

About half of the workers employed on the nation’s farms are undocumented immigrants, according to the Labor Department. If they were deported, our food supply would be in crisis.

Because of the farm labor shortage, many farms are relying more heavily on workers from Mexico, brought in through the H-2A temporary visa program. Critics say H-2A is cumbersome and slow, thanks to government red tape. Farmers in the Santa Barbara region of California reported losing $13 million in produce last year because workers didn’t arrive on time.

Congress should improve the H-2A program and get realistic about the need for farmworkers. America is a land of bounty, but those crops won’t pick themselves.