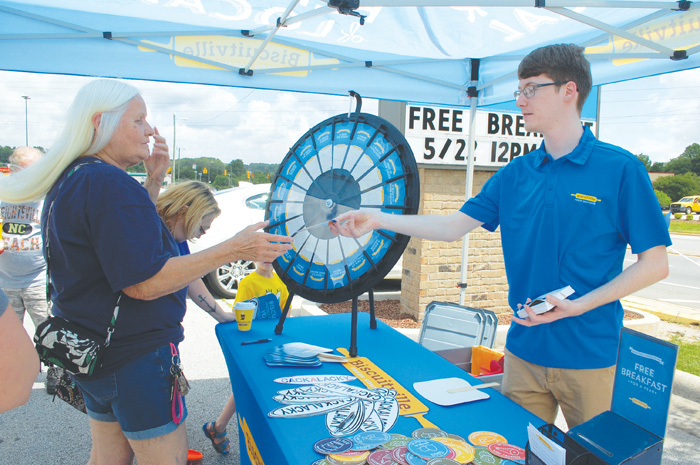 Biscuitville employee Jordan Smith gives a woman a coupon for a free side after she spun for it on the wheel. (Jessica Coates/Salisbury Post)

SALISBURY — Few things can draw a crowd like free food.

And the Salisbury Biscuitville wanted crowds of people to see its newly renovated space, said Kristie Mitchell, vice president of brand and marketing for Biscuitville.

“The new energy that’s been pumped into the stores, the customized things that are very specific to the community, the new menu boards — I just think there’s so many things for people to come and see that they are not necessarily used to or accustomed to with Biscuitville,” Mitchell said.

“About four or five years ago, we took the brand from Biscuitville to Biscuitville Fresh Southern,” Mitchell said. “So we knew that our restaurants needed a little work and a facelift and some fresh Southern put in them.”

Mitchell said about 75 percent of Biscuitville’s 55 stores have been renovated so far.

She said Salisbury’s location was one of the last to be “Fresh Southern” renovated because it was constructed within the last 10 years and is newer than most.

“They just didn’t need the cosmetic work that our others did,” Mitchell said.

Mitchell said the Salisbury location is one of the 10 largest Biscuitville locations.

“And we only have 10 locations that are this size,” Mitchell said. “We call these our Taj Mahals.”

“So we did things like reclaimed barn doors,” Mitchell said. “And we do photo wall murals that’s custom to the community and area. So that’s different for every Biscuitville location you go in.”

Mitchell said that from the biscuit-shaped wall dividers to the cage lights, “there’s all kinds of little nuances that we try to put in the tiny details of the renovated store.”

“And we’ve done about 40 of these stores now, so we’re getting pretty good,” Mitchell said.

The newly renovated Biscuitville has several new menu items — including desserts like strawberry shortcake — but is keeping the same recipes for many favorites.

“So we’ve got some great things on the horizon,” Mitchell said.