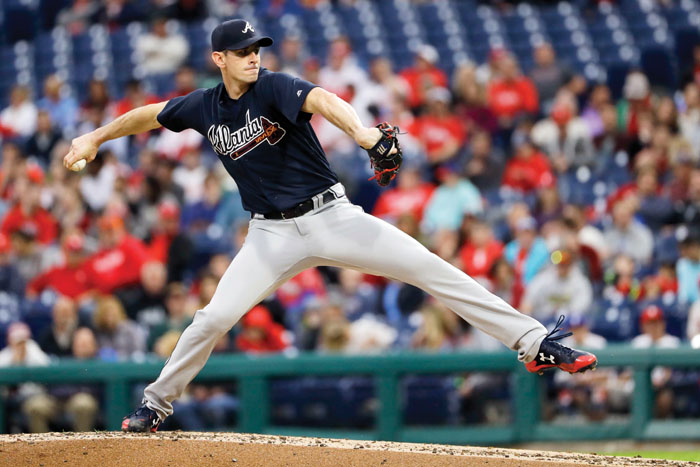 Atlanta Braves' Brandon McCarthy pitches during the second inning of a baseball game against the Philadelphia Phillies, Tuesday, May 22, 2018, in Philadelphia. (AP Photo/Matt Slocum)

By ROB MAADDI, AP Sports Writer
PHILADELPHIA (AP) — Brandon McCarthy keeps finding ways to beat the Phillies.
McCarthy tossed 5 2/3 sharp innings, Ozzie Albies hit his 14th homer and the Atlanta Braves beat Philadelphia 3-1 on Tuesday night.
McCarthy (5-2) allowed one run and four hits with five strikeouts. He is 4-0 with a 2.08 ERA against Philadelphia this season and 1-2 with a 6.60 ERA against the rest of the league.
“I warmed up and thought this could be a mess but the game started and I felt normal,” McCarthy said. “There’s no surprises facing a team four times. They knew where the ball is going. There’s no secrets. You just have to execute.”
Vince Velasquez (4-5) gave up two runs — one earned — and fanned nine in 4 2/3 innings. He fell to 0-4 against the Braves.
The NL East’s top two teams have already met 11 times, with Atlanta winning seven games.
Braves lefty A.J. Minter escaped a first-and-third, two-out jam in the eighth, retiring Jorge Alfaro on a fly to center. Arodys Vizcaino finished with a perfect inning for his ninth save in 11 tries.
Albies put the Braves in front with a solo shot in the third. The leadoff hitter is second behind Bryce Harper for most homers in the NL.
“I worked hard in the offseason. I want good results to happen and it’s happening,” Albies said.
Sloppy defense by the Phillies helped Atlanta get another run in the fifth.
Albies walked to start the inning. He advanced to third on Freddie Freeman’s single after right fielder Nick Williams threw to an uncovered base because third baseman Maikel Franco was shifted. Freeman went to second on the play. Nick Markakis followed with a bouncer to first baseman Carlos Santana. His throw to the plate sailed over Alfaro’s head for an error, allowing Albies to score.
Cesar Hernandez’s RBI single in the bottom half cut it to 2-1. But McCarthy struck out Rhys Hoskins swinging to strand runners on second and third.
The Braves missed an opportunity in the fourth when they loaded the bases with no outs on a walk and two singles. Velasquez struck out Dansby Swanson, Ryan Flaherty and McCarthy — each went down swinging.
McCarthy said he was merely “decoration” in the batter’s box.
“I had no chance against Velasquez,” he said.
Phillies manager Gabe Kapler was impressed with Velasquez’s resilience.
“It’s a lot of growth for him, took deep breaths out there, really saw him continuing to compose himself which is definite indication of development,” Kapler said.
Ronald Acuna’s RBI single in the ninth off Edubray Ramos drove in Albies to give the Braves an insurance run.
“He’s ignited us,” Braves manager Brian Snitker said of Albies. “He’s done a great job. He’s got a lot of confidence. He’s strong, he has a lot of bat speed. He can do a lot of things.”
DIVISION DIFFERENCE
The Braves are 20-10 against NL East opponents. The Phillies are just 9-15.
STARTING TIME
Philadelphia’s rotation has allowed one earned run or none in 11 of its last 15 starts. Atlanta’s rotation has allowed one earned run or none in seven of its last 10 starts.
ROAD WARRIORS
The Braves are 18-9 on the road this season, including 12-2 since April 28
TRAINER’S ROOM
Braves: RHP Anibal Sanchez (right hamstring strain) will make another rehab start for Triple-A Gwinnett on Saturday. Sanchez was roughed up Monday night, allowing eight runs in 3 2/3 innings against Durham.
Phillies: SS J.P. Crawford (right elbow strain) fielded grounders at extended spring training. … RHP Pat Neshek (right forearm strain) played catch.
UP NEXT
RHP Jake Arrieta (3-2, 2.82 ERA) starts for the Phillies while LHP Luiz Gohara (0-0, 1.29 ERA) goes for the Braves. Arrieta is 3-1 with a 2.76 ERA in five career starts vs. Atlanta. Gohara struck out nine and allowed one run in seven innings in his only outing vs. Philadelphia last season and lost.
___
More AP baseball: https://apnews.com/tag/MLBbaseball