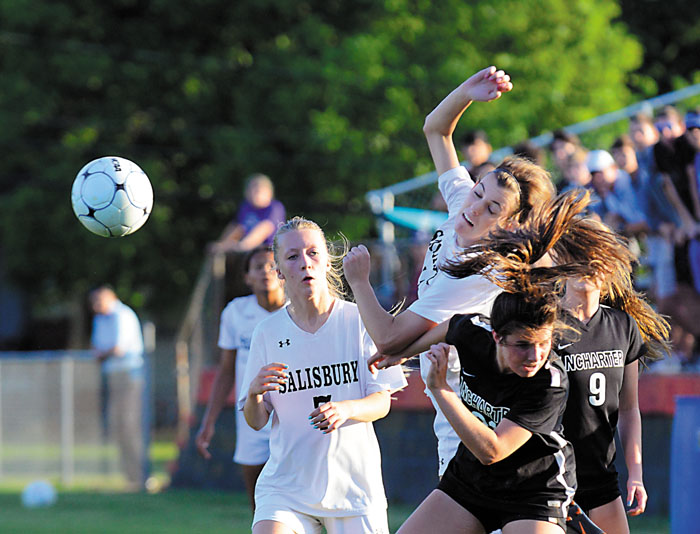 SALISBURY — And now, the words nobody wanted to read. Salisbury’s record-setting girls soccer season is over.

The Hornets were displaced from the 2A state playoffs Tuesday night at Ludwig Stadium, where Lake Norman Charter scored once in each half and handed Salisbury its first loss — a 2-0 setback in the Western Regional championship match.

“I’m proud that we had such a great season,” said forward Maria Capito, one of five Salisbury seniors who helped rewrite the school history book this spring. “I’m just sad that it’s over.”

Salisbury (25-1) had an unprecedented season, winning its first 25 games, the Central Carolina Conference title and diving five rounds deep into the playoffs. Lake Norman Charter (22-0-1) notched its ninth straight shutout — and fifth in postseason play — despite being outshot, 10-8. The Knights advanced to Saturday’s state final in Raleigh.

“What a tough one,” winning coach David Crutchfield exhaled after Salisbury ran out of stardust. “We spent much of this match resorting to their style of play, not ours. We played a lot of kickball. Everything that we anticipated they would do, they did — and we played right into it. In the second half, we settled down and figured it out.”

The loss was particularly difficult for Salisbury coach Matt Parrish, the maestro who held center stage while the Hornets performed a seemingly endless ballet of wonder.

“It’s easy to get caught up in the moment and think about the negatives and the what-could-haves,” he said in a pensive, post-match recall. “It takes me, being a little bit older and more seasoned, to step back and tell them, ‘Hey, senior class, you five … you won more games than any class in the history of the program. You guys won more playoff games than any Salisbury class. You had a better winning percentage, you won more games in a row, you made it past the third round. Think about all that.’ So yes, there were a lot of firsts with this group.”

A first goal against LNC might have changed the match’s complexion and sent the Hornets into the final. Instead, the guests received an early score from junior Olivia Haraldsson and a late one from sophomore Arabella Devoe, sending SHS skidding across the finish line.

“We’ve been down before,” said midfielder Julia Honeycutt. “Maybe two or three times, but we always came from behind to win. I wish our work ethic would have shown a little more and we could have gotten a goal. It just didn’t go our way tonight.”

It wasn’t for lack of effort. Freshman Piper Muire had a terrific scoring chance in the third minute, when she positioned herself in front of LNC keeper Kaela Rasenberger, measured teammate Lillie Rusher’s corner kick and headed a shot over the crossbar.

“Piper was still the best player on the field,” Parrish said. “Their coach was incredibly complimentary of her after the match. She is other-worldly for her age. When she gathers confidence going forward on her own — not on set pieces — she is impossible to stop. We’ve have five playoff games and she’s been the best player — or at least top two — in every one of them. She’s poised beyond her years.”

All of which made the outcome harder to swallow. Junior forward Freya Obermueller, Salisbury’s primary scoring threat, was well-marked throughout the match and never put a shot on frame. Salisbury’s vaulted defense, a lockdown unit that helped record 16 shutouts, was beaten on several plays, including the night’s first goal at the nine-minute mark. It came after senior keeper Emily Mann sprawled to her left and confiscated a loose ball about 15 yards from the cage, only to lose possession. LNC pounced on the rebound with gusto, moved the ball to the left and Haraldsson knocked it into an unprotected net.

“Never should have happened,” said Capito.

“There were mistakes by about four of five people on that play,” noted Parrish. “It started off with a shape issue. Then we had a stab and another stab. Then a ball deflects off a goalkeeper who couldn’t secure it. And lastly, we had nobody on the back side and they punched it into an open net. That was the worst set of coincidences of our season, all taking place at the same moment.”

It remained a 1-0 match until just 18:55 remained, when Devoe settled a long throw-in by Carsyn Yates and quickly steered a shot into the lower right corner. “I tried, but it was really close to the post,” Mann said. “It was good on her part.”

Crutchfield called it “the nail in the coffin,” and added: “That was our resiliency. We haven’t really been tested all year. We’re always been resilient. We just play tough and find our way.”

When it was over — and Salisbury’s five seniors had accepted the runnerup plaque — there were hugs, handshakes and even some tears. “I wouldn’t change a thing,” said Capito. “We gave it our all.”

“These girls aren’t going to remember the what-ifs and could-have-beens,” Parrish said. “They’ll remember the camaraderie we had. It was kind of a lightning-in-a-bottle thing — an awesome freshman class, a seasoned senior class, a foreign exchange student named Freya that came out of nowhere — all collectively rolled into something that, for three-and-a-half months was perfect. That’s what we’ll remember.”

NOTE: The match, scheduled for 6 o’clock, didn’t get underway until 7:00, due to a wait for the three game officials — due to a scheduling mishap.