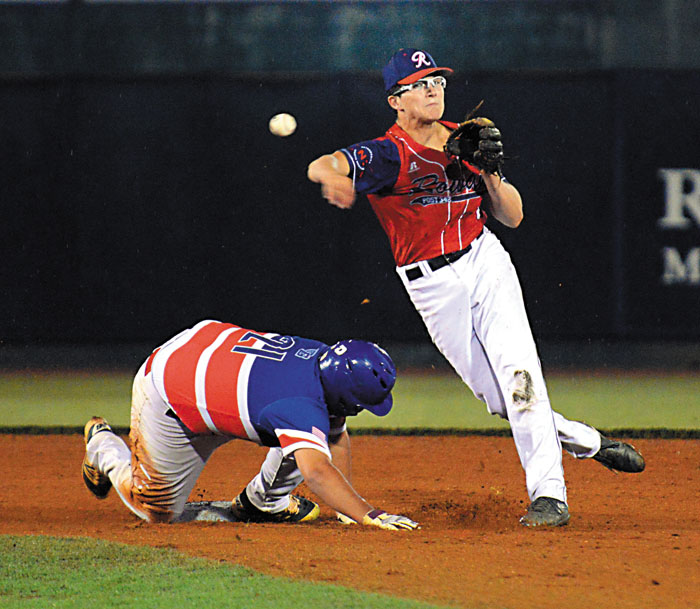 SALISBURY — Rowan County prevailed in its soggy American Legion opener on Sunday night, weathering an hour delay at the start and beating Greensboro, 8-2.

“I had to knock the mud off my cleats a few times, but it wasn’t that bad out there,” said Durham, who entered at the start of the fourth inning when it was 2-all.

He stayed in control the rest of the way at Newman Park in a seven-inning contest that ended around 11 p.m.

Rowan managed just four hits, and one of those was a gift. But Rowan didn’t need to swing the bats much. Greensboro hurlers contributed seven walks and two HBPs, while Greensboro fielders donated five errors.

Rowan’s  lineup wasn’t scary. East Rowan slugger Wayne Mize is out for a while with a hip injury, while Carson masher Luke Barringer saw action only as a pinch-hitter. Mize and Barringer were the county’s home run leaders.

Daniel Sell, a West jayvee who got just four varsity at-bats in the high school season, got the start in center field. Maddux Holshouser, a terrific pitcher for Carson but a .205 hitter, was swinging from the cleanup spot.

Veteran John Owen, fresh from a successful freshman year at Pitt Community College, started on the mound for Rowan. He pitched out of a two-on, no-outs jam in the first, but he allowed Braxton King’s solo homer and Jaylen Guy’s RBI double in the second inning.

Rowan got an early run on two HBPS, a walk and Olen Stamper’s sac fly, but trailed 2-1 going to the bottom of the third. Rowan tied the score in that inning. Experienced catcher Trevor Atwood doubled and scored the run that made it 2-all on a throwing error.

Durham replaced Owen to start the fourth, and he was so effective, his appearance on the mound was the turning point in the game.

Rowan scored the decisive runs in the bottom of the fourth. The No. 8 and No. 9 hitters Matthew Mathis and Sell drew one-out walks from reliever Ryan Douglas. Hayden Setzer’s flyball to left was played into a single and Rowan had the bases loaded. With two men out, Atwood put the ball in play, a grounder to the hole on the left side. Shortstop Guy tried to make a spectacular play — and his throw to first got away. Mathis and Sells scored, and Rowan led, 4-2.

Rowan tacked on four insurance runs in the sixth with the aid of three walks, two errors and a wild pitch. Barringer got a chance as a pinch-hitter with the bases loaded, and his groundball to third led to an errant throw home and two runs. Pinch-hitter Cameron Graham picked up the only RBI of the inning with a groundout.

Rowan’s defense was good. A diving stop by first baseman Chandler Lippard in the third inning helped Rowan stay in the game in the early going. Third baseman Stamper started a 5-4-3 double play to end the fifth. Then Durham didn’t need a whole lot of defensive help in the sixth and seventh.

“I didn’t throw a lot of changeups tonight,” Durham said. “I just mixed it up with curveballs and fastballs.”

It helped Durham that he had Atwood to throw to. Atwood was West’s catcher  in 2017, and the two Falcons were on the same page.

Towering, 6-foot-7 Colby Stuart, a southpaw, pitched the first three innings for Greensboro (1-1). He struggled with command but the only hit he surrendered was Atwell’s double. 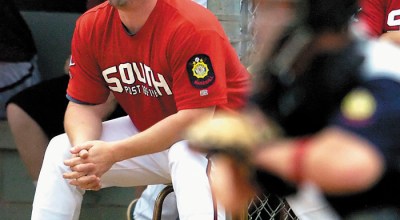