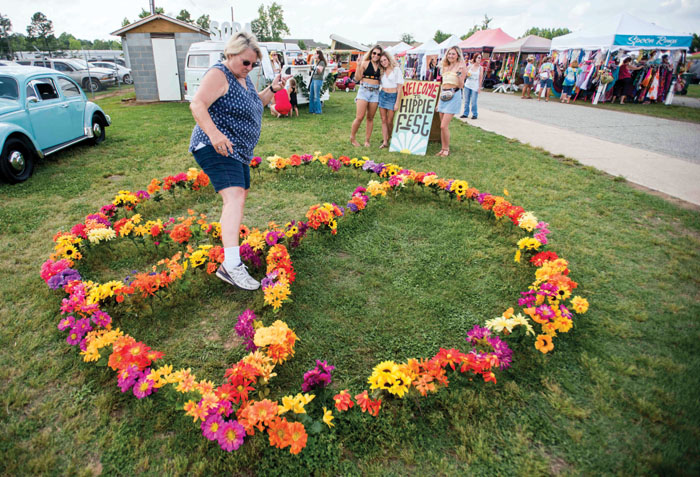 JON C. LAKEY / SALISBURY POST Madelyn Brown steps into a flowered peace sign to take a photo for a trio of girls at a hippie festival sign. The weekend Hippie Festival at The Rowan County Fairgrounds was filled with groovy attitudes, flowers, right on music and tie-dye everything. Saturday, May 19, 2018, in Salisbury, N.C.

SALISBURY — Sun-seekers and flower children flooded the Rowan County Fairgrounds over the weekend to feel the beat and get into the groove.

Hippie Fest, a traveling festival celebrating all things tie-dye, psychedelic and bohemian, set down its roots in Salisbury on Saturday and Sunday. The event featured performers, a vintage car show, live music and a multitude of vendors.

Tickets for the event had to be reserved in advance, and, according to the festival website, the Salisbury event was sold out both Saturday and Sunday. Vendor spaces were also sold out.

Hundreds of free-spirits came to relive parts of their youth, or to fall in love with the warm, colorful culture of a different time.

“I want to do my life,” Sheila Schofield said. “And that was this.”

During the reign of hippie culture, Schofield said she was occupied raising children, and after that she fell ill. She always regretted not being able to take part in hippie culture during its heyday.

“I wanted to travel and just be free,” she said.

Schofield drove down from the Chicago area, where she lives. She brought friend Donna Roe with her.

While Roe isn’t a hippie at heart like Schofield, she said she’d been enjoying the day.

Schofield has been to several other hippie festivals, and said she was drawn to them because of the culture and the warmth the events provided.

“You don’t feel judged,” she said. “You can just be yourself.”

Schofield and Roe weren’t the only out-of-towners. Eric and Faith Prevatte drove up from Columbia, S.C. for the day.

“I just thought it would be fun to relax,” Faith said.

She was also drawn by the music, color and free-spirit mood.

“I’m a hippie at heart,” she said with a chuckle.

Visitors could dance to old, familiar tunes, blow bubbles, take part in a “DIY Tie-Dye” station and explore the grounds. Signs placed around the fairgrounds encouraged visitors to “have a groovy day,” “stay trippy little hippie” and to “shine on.”

Robert Czuprynski and daughter Katie drove down from Illinois to celebrate Katie’s birthday. At 17, Katie is “a full-fledged hippie” who loves the music of the time and has a passion for classic Volkswagens. Katie said she was looking forward to the car show.

Czuprynski said his older brother lived through the original hippie fever of the 1960s and 70s, but it’s all new for him.

“This is a first-time experience,” he said.

But for others, it’s a tradition. Charlotte natives Ashley Dorso and Michael Malkin drove out to Salisbury for another year of groovy fun.

“It was one of our first dates,” Malkin recalls.

“It’s kind of a like a tradition,” Dorso said.

While neither would describe themselves as hippies, they both enjoy the festival.