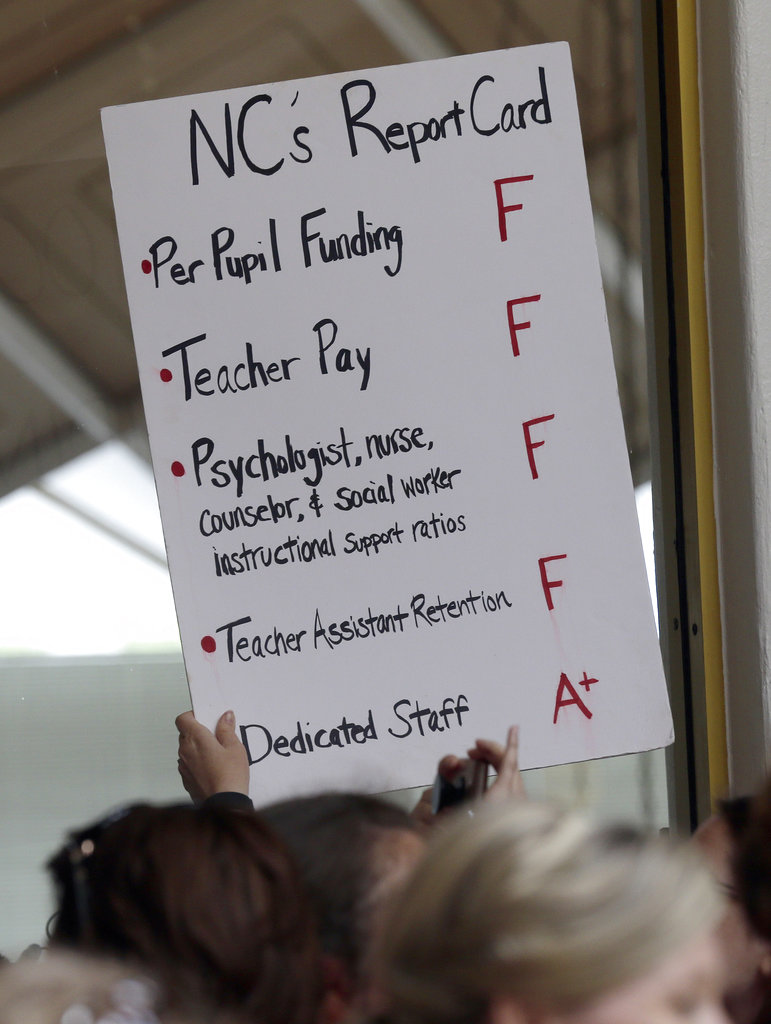 An educator displays a sign during a teachers rally at the General Assembly in Raleigh, N.C., Wednesday, May 16, 2018. Thousands of teachers rallied the state capital seeking a political showdown over wages and funding for public school classrooms. (AP Photo/Gerry Broome)

RALEIGH — Last week’s massive teacher march and rally was the best example of democracy in action that the state legislature has seen in years.

I’d been skeptical that the turnout would meet the ever-increasing predictions offered by organizers. Raleigh’s weather that day felt like a tropical rainforest — if I was a teacher, I’d be tempted to stay in bed and enjoy the day off from work prompted by the event.

As the marchers approached the Legislative Building, I stepped up on the roof to check the crowd size. I saw a sea of people wearing red, and I was seeing only a fraction of the people participating. A half-mile away, my colleagues at The News & Observer’s headquarters had the same view.

Maybe it was 15,000 people. Maybe it was 20,000. It’s hard to get an accurate count of a crowd that big. But the crowd size wasn’t what I found most impressive about the event.

The teachers didn’t just come to Raleigh to chant slogans and wave clever homemade signs. They wanted dialogue with their elected leaders, regardless of whether that person was a Democrat or Republican.

They wanted to voice their concerns in person, to make sure lawmakers could actually understand the challenges they face in classrooms every day.

They wanted to teach their legislators. And the legislators seemed willing to learn — to put their partisan talking points aside for a moment and just listen.

This was surprising because Republican legislative leaders had blasted the event.

They’d called it a Democratic Party campaign rally organized by a wannabe union seeking to disrupt families by shutting down schools.

That rhetoric came off as callous, but GOP lawmakers ultimately rolled out the welcome mat instead of slamming office doors. Many of them made time to meet with small groups of teachers from their districts.

Even Rep. Mark Brody, R-Union, who’d suggested the event was organized by “union thugs,” was willing to talk.

“I’ve been schooled a lot in the last couple of hours,” Brody said, adding that he shared many of the teachers’ concerns. It turns out face-to-face meetings are a lot more productive than screaming on social media.

While much of the news coverage has focused on the teacher pay debate, other issues dominated the discussions. “I heard about the cuts to teaching assistants, outdated textbooks, essential supplies paid out of individual teacher’s pockets, significantly below recommended numbers of school nurses, counselors and social workers, the elimination of increases upon attainment of graduate degrees, lack of essential instructional technology, dilapidated schools, and on and on, but not once a ‘show me the salary’ complaint,” Rep. Joe John, D-Wake, said on Facebook.

The N.C. Association of Educators — which organized the march and rally — offered its proposed solutions, but the group made a tactical mistake by making it explicitly partisan. NCAE leaders said they want to elect Democrats in November — giving legislative leaders ammunition to dismiss the event as a political rally headlined by Gov. Roy Cooper.

This year’s legislative session has just begun, and NCAE could be more effective by focusing on policy as long as the budget can still be revised. If the current crop of legislators doesn’t deliver on teachers’ concerns, teachers then have time to campaign against unsupportive incumbents.

Why wait until 2019 to solve education problems when the march’s success might bring solutions in time for schools to reopen in August?