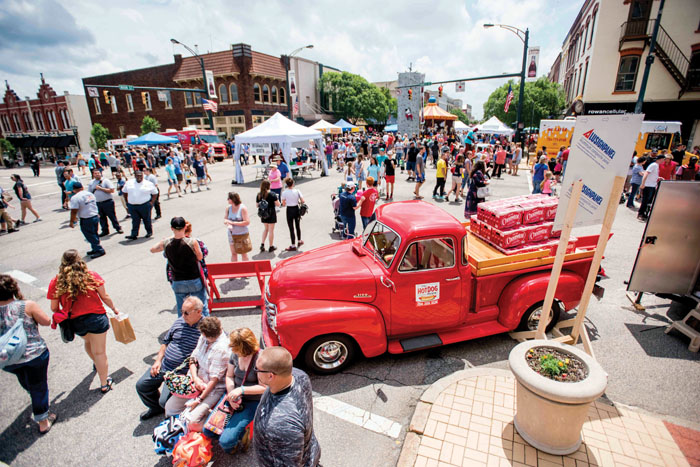 SALISBURY — Like soda from a fountain tap, locals flooded Salisbury streets Saturday to get a taste of “life, liberty and the pursuit of cheerfulness.”

The second annual Cheerwine Festival managed to go above and beyond local expectations. Last year’s festival, in honor of the beloved beverage’s 100th birthday, attracted roughly 30,000 to downtown Salisbury for food, fun and an ice-cold glass of Cheerwine. But organizers said they set a conservative goal for the 2018 festival — just 20,000 people.

Linda McElroy, Salisbury communications director, said organizers thought fewer people would turn out due to predicted rain and the passing of Cheerwine’s centennial.

Crowds — and the weather — proved them wrong. After an early morning rain and some cloud cover, the sun broke out; and it turns out that a lot of people were just as eager to celebrate 101 years of Cheerwine as they were to celebrate 100 years.

Shortly after mid-day, McElroy said roughly 30,000 people were expected to come through the festival by day’s end. She, and other organizers, were thrilled.

The city closed down several downtown blocks to make way for the crowd and a plethora of food vendors and craftsman. Main Street was closed between Liberty and Bank streets, and the 100 blocks of West and East Innes streets were also closed to thru traffic.

As the day progressed, the area around the Salisbury Square filled with laughter and music. Visitors could shop wares, buy official Cheerwine swag or stop and watch a street show at one of more than 60 vendors populating downtown. There were bounce houses, face painting and a rock-climbing wall for kids.

Ina Shippy and family drove all the way from Raleigh for a taste of the festival.

“We love Cheerwine,” she said.

Shippy, originally from Winston-Salem, said she read about the festival online, and thought it sounded like a fun family activity. In between strolling down the street, Shippy and her family sampled various Cheerwine specialty products, including slushies and funnel cake.

“I’ve just been enjoying tasting the different stuff,” she said.

Chris Soliz and family took a break in a shady storefront to enjoy some cold treats. The family is from Salisbury, but said they didn’t make it to last year’s festival. But, Soliz said, it certainly lives up to the hype.

Children Payton and Samuel said they’d enjoyed playing in the bounce houses and blowing bubbles. And Soliz said he sees hope for the festival’s future.

“I think it’s a good thing and has lots of room to grow,” he said.

McElroy said the city and Cheerwine plan to keep the festival going, and hope it will continue to be a hit.

“We’re excited about this event and what it could mean for Salisbury going forward,” she said.

“It’s a great way to give back to Salisbury, who’s really made us who we are today,” she said.

This is the first year the town of Salisbury and Cheerwine have co-hosted an event.

Proceeds from Cheerwine sales will be donated to Rowan Helping Ministries, and proceeds from recycled Cheerwine cans will go to support Faithful Friends Animal Sanctuary.