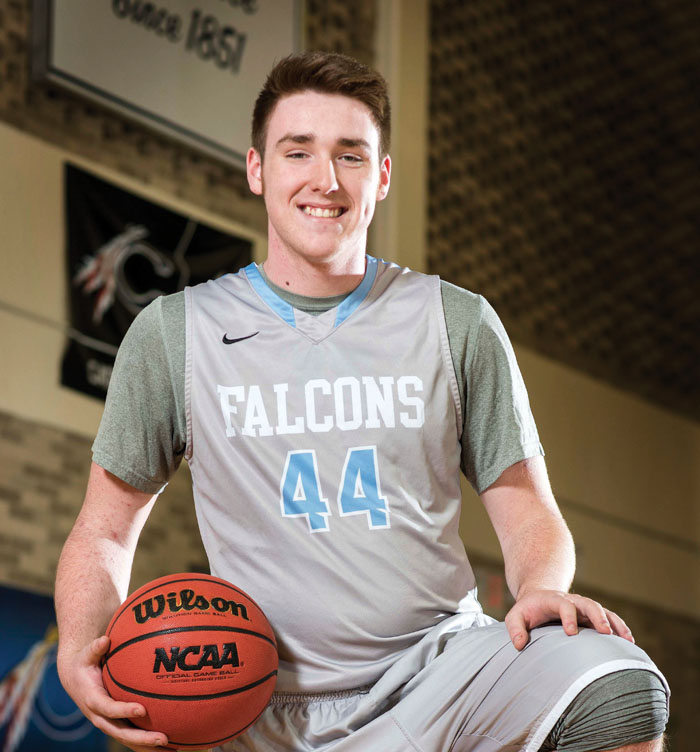 MOUNT ULLA —  To older folks, the school in Central Virginia, about an hour west of Richmond, is still Fork Union Military Academy.

To the younger generation, it’s become FUMA (pronounced Foo-Mah), but FUMA hasn’t changed. FUMA is still all structure and discipline and zero nonsense.

Basically, FUMA means no — no girls, no cellphones, no Twitter, no Facebook, no facial hair, no curse words.

Two of  long-time West Rowan boys basketball coach Mike Gurley’s finest players headed to FUMA  after graduating about 15 years ago. In back-to-back years, Donte Minter and Junior Hairston made successful boys-to-men transitions as post-graduate students at FUMA. Both went on to Division I careers. Both played pro ball overseas. Both are stronger, better people for having persevered at FUMA. Salisbury-Rowan Hall of Famer Minter gives something back to Rowan every time you look up — whether it’s free turkeys at Thanksgiving or free summer basketball camps for kids who can’t afford the regular ones.

South Rowan graduate Carlos Dixon took the FUMA path several years before Minter and Hairston. Dixon also went on to Division I, competed overseas for more than a decade and now has embarked on a college coaching career.

“I’m looking at is as a great opportunity to better myself as a basketball player and a person,” Mauldin said. “I’m going to a place where they never give you a chance to  slack off, and it’s going to make me better.”

The 6-foot-8 Mauldin’s court record is one of the most impressive in county history. He’s only the third male to score 2,000 points, joining a very brief list that includes Minter and former N.C. State starter Scooter Sherrill.

“I’m excited for Caleb to be going to Fork Union,” Gurley said. “I realize this is a different time, a different world from when Donte and Junior went there, but the concept is the same. Caleb is going to improve two-fold. He’s going to improve as a player, but he’s also going to improve his mental, physical and emotional toughness. He evaluated all his options and is convinced this is the best course. A year at Fork Union is going to extend that period where recruiters can see him against really good competition. Caleb has his list of dreams, and a year at Fork Union could get him closer to those dreams.”

It’s not like Mauldin didn’t have college offers. When you’re a strong, stout 6-foot-8 and you can score as often and as steadily as Mauldin has, you get offers. He just never got that offer that made his heart beat faster.

“I had offers, some good offers,” Mauldin said. “Catawba made a good offer. But my thinking right now is that I want to see where I am after a year at FUMA. I think that year can do a lot for me as far as bigger opportunities.”

There are a lot of FUMA success stories, many from the football field. Quarterback Vinny Testaverde went to FUMA before he won the Heisman Trophy at Miami. Running back Eddie George moved on from FUMA to Ohio State and also owns a  Heisman. Plaxico Burress went to FUMA before he caught 64 touchdowns passes in the NFL.

As far as hoops, UNC fans may remember Shammond Wiilliams, who set 3-point shooting records for the Tar Heels. Williams was a FUMA guy.

As a post-graduate student at FUMA, Mauldin will be in that shadowy area somewhere between high school and college. He’ll get to play an extra year of basketball against a combination of prep schools and college jayvee teams. He won’t lose any college eligibility. He’ll still have four years of eligibility with the school that he signs with next.

“We’re excited to get Caleb,” FUMA head coach Matt Donohue said. “He’s got some tools. He’s got size and he can score and he’s ready to play at the next level right now. But that extra year  of development he’s going to have us with us is going to provide him with a whole different level of experience. The goal for all of our kids is to sign with a Division I school. I can’t guarantee that’s going to happen, but I can guarantee that they’ll get better and they’ll get a chance to show people what they can do.  Caleb should be signing with someone six months from now. We want that school to be a place that is the right fit for him.”

Mauldin realizes the next year of his life isn’t going to a barrel of fun. There will be a lot of  studying, saluting, flag-raising, flag-lowering and standing at attention. He’s going to be getting up to the sound of a bugle at 6 a.m.  He’s going to be turning the lights out at 10 p.m. and crawling into bed exhausted. He’ll have a laptop, but it will be for schoolwork. A  television set is going to be his only entertainment other than when he’s on the court. He’s going to have to make his bed right and tight like a Marine, keep his shoes shined and keep his room  immaculate. Room inspections will be frequent, and if his quarters fail to pass inspection — or his uniform, his shave or his haircut don’t meet the requirements — he’s going to be marching. Marching is the standard punishment at FUMA.

“I understand that it’s a demanding military setting,” Mauldin said. “But I believe it’s going to be a great experience.”

As far as basketball,  Mauldin is going to get all he can handle.

“Fork Union plays or practices pretty much every day from Labor Day to Memorial Day,” Gurley said. “Even after their basketball season is over, they’re practicing.”

On the court, Mauldin should be a force.  Everyone praises his hands and scoring ability. He catches the ball smoothly. He’s a solid, fundamentally sound, two-handed rebounder and he has surprisingly nimble feet and a variety of post moves.

The knocks on him are he lacks big-time explosiveness and athleticism, but he’ll get a chance to prove his strengths are greater than his weaknesses. He’s also going to get a chance to display more fire. Mauldin is reserved by nature. He’s not a fist-pumper. College coaches want to see passion, emotional investment, and he can grow in that regard at FUMA.

“He’ll be fine,” Donohue said. “Caleb has his academics in order and he’s a high-character guy. You don’t bring a young man into a an environment like ours unless you are confident he can deal with the challenges that will come his way. He can handle it.”

Gurley has seen his guys succeed at FUMA before. He believes it will be no different for Mauldin.