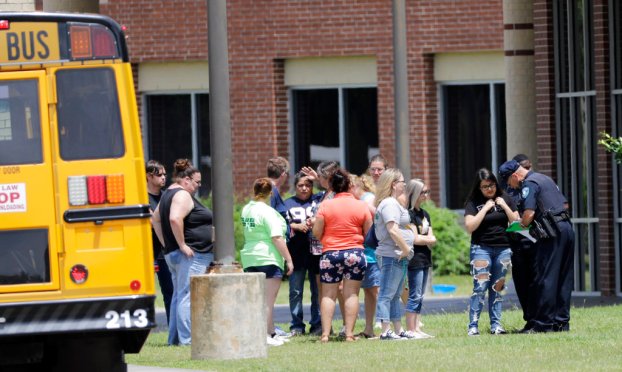 Students are checked before entering Santa Fe High School in Santa Fe, Texas, on Saturday, May 19, 2018. Students and teachers were allowed back into parts of the school to retrieve their belongings Saturday. A gunman opened fire inside the school Friday, May 18, 2018, killing several people. (AP Photo/David J. Phillip)

For at least the last 12 years, one school board after another has discussed issues that smell and taste like addressing school safety issues. The minuscule of which was the pepper spray fiasco that sent the county into an uproar. Since there had not been a school shooting for a brief period of time, the serious issue of keeping our students and staff safe returned to rhetoric with little, if any, serious action or plan. On the Board of Educaton level, the issue was swept under the rug while rhetoric continued to highlight the news media. Experts provided “expert” advice while others raised the “we have to do something” flag.

The latest tragedy shows that the carpet is no longer adequate to hide our failure in protecting our wards. Gun ownership is not the problem, as that has been part of this country since its founding, yet school shootings have only become an issue in recent years. More resource officers (something RSSS did address) will only diminish the damage after shots are fired, since there is no prompt to respond until the shooter becomes active.

I believe the school boards and school administrations nationwide have tipped-toed gently over the one and only sure step to protect the school proper. That is to keep guns outside the school structure. This can be accomplished only by controlling entry and exit using metal detectors.

I do not suggest this off-handily as I know controlling student entry and exit is costly in dollars and time. But our children deserve a safe environment without time or funding being a consideration.

Letter: It’s time to declare we won’t take it any more

“When will they ever learn?” I am being haunted by that refrain from the ’60s protest song, “Where Have All... read more