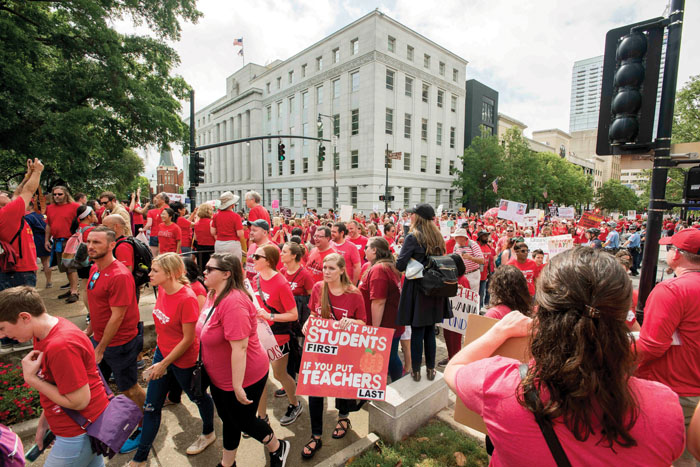 Not long ago, I spotted a greeting card that had a quote by Benjamin Franklin on the front. I’m always drawn to cards with quotes. This one spoke to me because I knew I could use it with my students one day, and it also had a little bit of attitude, which I found refreshing.

Little did I know then that I would be the one to put this quote to use from my own experience.

Wednesday, as I joined with thousands of educators from all across our state in Raleigh, Franklin’s words were my personal mantra as I became part of a red river of teachers flowing upstream on Fayetteville Street, headed to the state capitol building. I began taking mental notes along the way, hoping I would be able to put my thoughts into words to ensure that I was “doing something worth writing.”

Along the route, people came out of stores and cheered their support. It was both humbling and validating.

Downtown churches provided water, lemonade, and snacks to walkers. One lady who was in a wheel chair gave me a bottle of water and proclaimed, “Yay for teachers!” That touched me as perhaps nothing else did all day.

As the morning began, the air was already heavy and the sky was a threatening gray. But the teachers I saw on every corner were happy and smiling, with ponchos in hand, excited to be a part of something that was bigger than themselves.

Many of the signs I read in the crowd were things I had thought or had said myself over the past decade, making me know immediately that I was surrounded by friends who shared my concerns and convictions.

“I’ve never heard anyone say they got into teaching to get rich,” read one. Another said, “My second job paid for this sign.” Some obviously showed a teacher’s wit: “I’m using my teacher voice today,” and “As usual, I’m working on my day off.” Those were just a few of the hundreds that were peppered throughout the crowd.

Perhaps the saddest sign I saw was one that read, “39th in per pupil spending: NORTH DON’T CARE-O-LINA.”

That pretty much sums up the feelings of teachers and the lack of support they get from some legislators.

I was also sad when I realized that we as teachers often feel like we are the enemy of our state. Where did this feeling come from? And when?

I personally felt like an adversary when I awkwardly came face to face with several legislators on the sidewalk who would not make eye contact with me as they scurried to safely tuck themselves away in the legislative building for their opening session at noon.

The overall atmosphere and tone of the day resembled a tailgate pep rally, a religious revival and a family reunion all rolled into one. Laughter and good will could be heard amidst hearty chants of “Remember, remember, we vote in November!”

But let there be no mistake: teachers didn’t take a personal day to go on a statewide field trip to have a good time. They took a personal day at their own expense to get a message across to their state representatives: teachers have been patient for 10 years. They are tired, and they are frustrated. And dare I say angry?

One of my students asked if we threw things at the rally or turned over any cars. I told him that wasn’t the point. I think he was disappointed. He wanted a little more drama. I told him it wasn’t that exciting, but it was an historic day in North Carolina. That fact alone, to me, made the day “worth doing and worth writing about.”

The skies were unpredictably ominous throughout the entire day Wednesday, but the heavy rains mercifully held off until the rally was about to end. As I headed south on I-85, going in and out of torrential downpours on my journey home, I found myself wishing I would see a rainbow after the sun triumphantly pierced through the dark clouds.

But then I realized, teachers aren’t looking for a pot of gold. We mainly need some rays of hope. And we did get those.