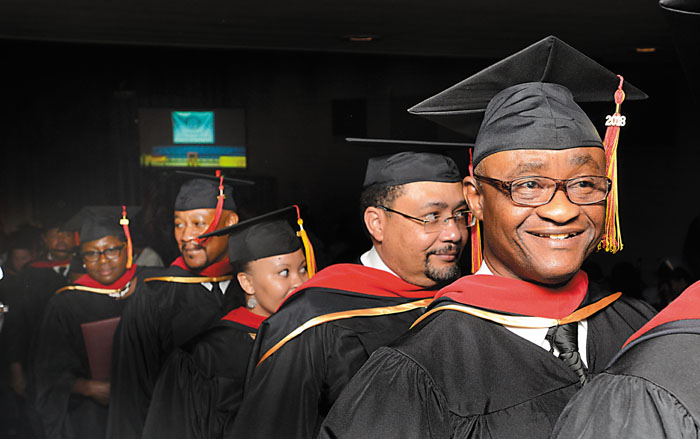 Wayne Hinshaw / for the Salisbury Post Graduates are all smiles as they march out of Varick Auditorium at Livingstone College. Hood Seminary conferred 35 degrees during its graduation ceremony Saturday.

SALISBURY — Students of Hood Seminary looked to past and future as they donned their mortarboards and prepared to receive their degrees. While the day’s festivities represented the end of one era, Hood Theological Seminary President Rev. Dr. Vergel Lattimore said, it was the beginning of another.

Hood Theological Seminary held its 17th commencement Saturday morning at Varik Auditorium on the campus of Livingstone College. A total of 35 students received degrees or certificates.

During a short ceremony that was filled with music, scripture and entreaties for students to keep to the faith, graduates were also asked to consider some unlikely questions.

This year’s commencement speaker was Dr. Nikki Giovanni, a writer, poet and advocate.

Giovanni is a professor at Virginia Tech University.

Lattimore called her “one of the most meaningful voices in 20th- and 21st-century America.” Her writings have spanned the human spectrum of dynamic issues including spirituality, love, relationships, life fulfillment, self-affirmation, cultural pride and the affirmation of black life and personhood.

Giovanni taught English, creative writing and black studies for 15 years in colleges and universities before being named the 1999 university distinguished professor for the department of English at Virginia Tech. She holds a bachelor of arts with honors in history from Fisk University. She has been awarded 18 doctorates of humane letters, three doctorates of literature, two doctorates of arts and two doctorates of letters.

In addition to her volumes of adult literature, her books for children speak to the historical, emotional and psychological realities of growing up in an ambivalent society while maintaining a hopeful outlook on the world.

“We know horrible things happened to us as black people, and we said ‘This is as far as we can go,’” she said.

Giovanni spoke of moments when words turned into actions — emancipation, the Civil Rights movement, and all the way back, 2,000 years ago, when a man named Simon offered to carry the cross for Jesus Christ before his crucifixion.

Giovanni then asked graduates to reflect on what words must have passed between Christ and Simon. While a few things are laid out in the Bible, Giovanni said she believes there must have been more. At the very least, she said, she believed that Jesus must have said “Thank you,” “Because I know Jesus was polite.”