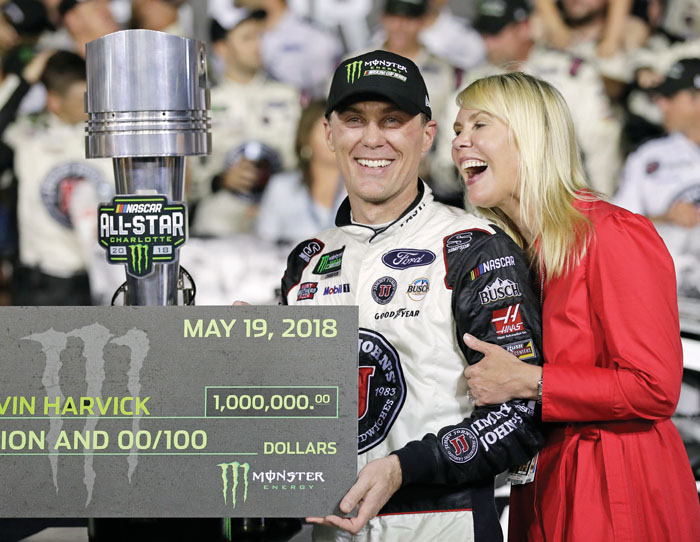 CONCORD (AP) — Nothing can stop Kevin Harvick these days, not an experimental rules package or a field of racers with nothing but pride on the line, and the hottest driver in NASCAR scored a $1 million payday by winning the All-Star race.

Harvick’s win Saturday night came exactly 11 years to the day of his only other win in Charlotte Motor Speedway’s exhibition event. This time the victory is part of a raging hot streak that brought him into the All-Star race with five points race victories, including the last two.

It’s technically three in a row now, although the All-Star race is for cash only. But the stat sheet shows that Harvick has won six of the 13 races since the season-opening Daytona 500, and Ford drivers have eight of those wins.

“Everything is going our way,” Harvick said. “It’s kind of a game at this particular point.”

Because the All-Star race is a made-for-TV event, NASCAR could play with the rules and try to spice up a race that has been beyond boring the last 10 years. No amount of tinkering to the format or the rules could liven the event, so NASCAR made a radical change this time. The aerodynamic package included a controversial horsepower-sapping restrictor plate, and it slowed the cars into a tighter pack that allowed for increased passing.

The package Saturday night did make for better racing, but the same result: Harvick celebrating again. This time it was the 50th Cup victory for Stewart-Haas Racing.

“A lot of pushing and shoving. It reminded me a lot of IROC racing back in the day,” Harvick said, referring to the old all-star series that pitted champions from various series together in identically prepared cars. “We will see what everybody thinks and go from there.”

NASCAR was cautiously optimistic after the race and hesitant to make too quick of a judgment despite the positive feelings after the experiment.

“From an eye-test, we were certainly pleased with what we saw,” said NASCAR head of competition Steve O’Donnell, who felt the lead changes Saturday night topped the last four years. O’Donnell made no promises as to what might come of the rules package, but also didn’t rule out that it could be used again.

Drivers had mixed feelings on the package.

“I don’t want to race it every week, but every now and then is OK,” said Kyle Larson.

Marcus Smith, president of Charlotte Motor Speedway and one of the main proponents for NASCAR trying something radical, loved the end result.

“I thought it was the best racing we’ve seen at a mile-and-a-half track in years,” said Smith, who added he’d wait for fan feedback before declaring if he wants it for next week’s Coca-Cola 600.

As for the rules not changing the results, O’Donnell had a simple explanation: “At the end of the day, the best team and the best drivers are going to go out there and win, and we saw that tonight,” he said.

Daniel Suarez won a stage in an earlier qualifying race to make the main event, and he finished second in a Toyota for Joe Gibbs Racing. Suarez had one shot at trying to beat Harvick when the race went into overtime and he lined up next to Harvick on a restart with two extra laps ahead. Suarez got a push from teammate Denny Hamlin but he never could clear Harvick, and Harvick won by 0.325 seconds.

Joey Logano was third in a Ford for Team Penske and Hamlin was fourth.

Logano had the push of Harvick on the final restart but knew he had little chance at getting around Harvick. He still tried to craft a plan.

Chase Elliott, winner of the fan vote to earn his spot in the All-Star race, was fifth.

Jimmie Johnson remained winless for more than a year with a sixth-place finish, and Larson was next at seventh. Larson tangled on the track with Logano, who was shoved into the wall in the closing laps by Larson. Logano didn’t deny intentionally sending Larson on a long slide through the grass as retaliation.

That caution sent the race into overtime and forced Harvick to withstand one final restart before collecting his $1 million.

More from the All-Star Race:

QUALIFIERS: The race was for only 21 drivers, and had three spots open to winners from a qualifying event. They were claimed by Alex Bowman, Suarez, and AJ Allmendinger. It was Allmendinger who put on a shot to get into the main event, and he ran hard for the $1 million prize. He finished eighth.

Elliott won the fan vote to take the fourth and final open slot in the All-Star race.

The Coca-Cola 600 on May 27. It is NASCAR’s longest race, a crown jewel on the schedule and Austin Dillon is the defending winner. The Daytona 500 winner used fuel mileage strategy to win last year’s 600, and his Daytona win came with a last-lap bump in overtime to take the checkered flag. The Coca-Cola 600 will use the traditional rules package.

Sauter led a restart with 10 to go, quickly built a large lead and cruised to his 20th career victory. Brett Moffitt and Justin Haley were battling for second, but made contact that nearly sent Haley into the wall.

“We won at Charlotte!” Sauter said on the radio. “This is the biggest of my life.”

Sauter was the pole-setter based on owner points after the qualifying session was canceled due to rain. He led 71 of the 134 laps.

“This is the biggest race of my career, and I’ve won a lot of big races. We kept making adjustments on the truck all night and made it better and better.”

Sauter increased his series lead to 59 points over second-place Noah Gragson, who finished the race in eighth.

Cup Series star Kyle Busch, who was slowed by a couple of pit-road penalties, finished second, 1.340 seconds back. Kyle Busch Motorsports teammate Brandon Jones was third, getting passed with a lap remaining. Moffitt and Ben Rhodes rounded out the top five.