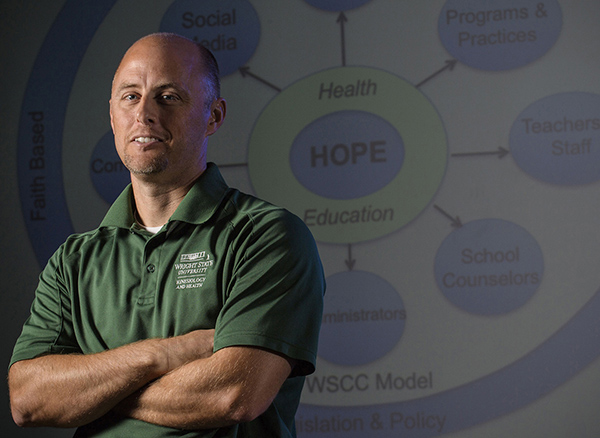 Ohio, a state where 4,329 people died of drug overdoses in 2016, a death rate second only to neighboring West Virginia, is taking the fight against the opioid epidemic into the classroom with a new style of drug-abuse-prevention education.

Ohio’s plan, controversial in a state that prizes local control over schools, features lessons that begin in kindergarten. Instead of relying on scare tactics about drug use or campaigns that recite facts about drugs’ toll on the body, teachers are encouraged to discuss real-life situations and ways to deal with them and to build the social and emotional skills that experts say can reduce the risk of substance abuse.

Joy Edgell, principal of Belpre Elementary School in southeastern Ohio, said that, until recently, kindergarten safety efforts typically focused on stranger danger and on avoiding household hazards. But three years ago, a first-grader brought a heroin needle to school in her backpack. She explained how her father used the needle and said that she brought it to school to keep a younger sibling from stepping on it.

Then she called the police.

“This is here. This is real,” Edgell told her staff.

This year, Belpre began a pilot of the Health and Opioid Prevention Education, or HOPE, program, developed by Kevin Lorson, a health and physical education professor at Wright State University and a team of educators with a grant from the Ohio Department of Higher Education.

In one lesson, 25 children sat on a carpet and helped their teacher make a chart.

“What is an adult?” the teacher asked, writing responses on a large notepad affixed to the wall.

“What does the word ‘trusted’ mean?”

Finally, she put the two key words together and asked pupils to brainstorm about people who could help them make healthy choices and feel safe, people they could identify as “trusted adults.”

A second lesson emphasized the importance of never taking or touching medicine “unless a trusted adult helps you.” That prompted one child to tell the class about the time he fell, and his third-grade sister offered him pain medication she had been prescribed for an injured arm. “I told her I couldn’t take her medication!” the boy announced.

From the mouth of this “smart cookie,” as his teacher called him, came one of the core goals of HOPE: to instill in children at an early age the ability to make healthy choices and ultimately curb what Ohio Attorney General Mike DeWine called “the worst public-health crisis in our lifetime.”

HOPE also fulfills a practical need, one created in 2014 when the Ohio legislature passed a bill requiring schools to teach the connection between prescription opioid abuse and heroin addiction.

“You do know no one is doing this, right?” Lorson told state leaders in 2016 during a discussion of the bill’s requirement. Schools lacked the tools to follow through, he said.

The signs that drug misuse was affecting some children in Belpre, a city of 6,500 separated from West Virginia by the Ohio River, had been appearing with more and more regularity, school officials said.

More kindergartners exhibited trouble regulating emotions and outbursts. In some cases, grandparents and other relatives served as primary caregivers, stepping in because a parent was struggling with addiction. And in 2015, Hunter Burkey, a popular senior at Belpre High School, died of a heroin overdose.

In response, the district added training to recognize signs of trauma and adverse childhood experiences. Educators learned to look at the circumstances that might be affecting a student with behavior problems.

Edgell described what might happen to a boy whose father was in jail. “He’s living with Grandma. Grandma is sick. He’s going to have a rough week.”

The lessons have helped illuminate complicated home lives. Fourth-graders doing a role-playing exercise to practice standing up for themselves and refusing drugs wanted to make sure the teacher knew a parent “was still a good person” even if he or she had trouble with addiction.

And a few sixth-graders “got emotional,” teachers said, while thinking about misusing prescription and over-the-counter drugs.The reality at Belpre Elementary and other Ohio schools in the state is that some children’s ADHD medication – Adderall is an easily misused stimulant – is taken or stolen by family members.

“We want our kids to know they are not alone. We want them to know that we really are a safe place. Your parents didn’t make a good decision. You are still going to be OK,” Braun said. Teacher feedback about HOPE has been positive, particularly because the 20-minute lessons are developmentally appropriate, easy to implement and do not feel like “one more thing,” Braun said.

But while early prevention education sounds good in theory, the state can’t force its more than 600 school districts to follow a specific approach. Ohio is “a very strong local-control state,” said Kenna Haycox, senior policy consultant at the Ohio School Boards Association. “Boards have the authority to determine their academic curriculum.”

Ohio law prohibits the State Board of Education from establishing health-education standards. It is the only state in the country that lacks such standards.

“You have the state with the opioid epidemic and a state without health-education standards,” said Wright State University’s Lorson, former president of the Ohio Association for Health, Physical Education, Recreation, and Dance.

The extent of opioid abuse in Ohio has galvanized the state’s leaders to take the fight into the classroom.

Vernon Sykes, the ranking Democrat on the Ohio state Senate’s education committee, has spent a year and a half working on a bill that would allow for state health education standards. He has been trying to overcome resistance from legislators who are concerned it will affect the state’s abstinence-only approach to sex education.

“We teach reading and writing every year,” he said in a telephone interview. “What makes us think we can wait until the fourth or fifth year to do something about the drug problem? If this is as important as I think it is, we need to get serious about it.”

“Prevention is not about one drug,” said Michelle Miller-Day, a professor of communication studies at Chapman University in Orange, Calif., and an expert on prevention curriculum. “It is about social, emotional development in kids so that when they are faced with stressors or boredom or a quick fix for pain or ‘I need to stay up late to study,’ ” they can deal with emotions naturally.

Social context is important, she said, and telling kids to simply say “no” is not enough when “the good-looking captain of the football team is offering me a beer,” said Miller-Day.

Knowing how to make effective decisions (assessing options, reflecting on what will happen) should start long before hearing messages such as “Don’t do drugs. This is what it does to your brain and liver,” she said.

Reaching kids when they are 6 or 7 and forming habits and behavior is important, said Melanie Lynch, an award-winning health teacher in the North Allegany school district in Pennsylvania. By the time students are in high school, Lynch said, “I’m not doing a whole lesson on vaping. I can’t afford that kind of time.”

HOPE also relies on the classroom teacher rather than an outside guest or a special assembly.

“The teacher is so important. They are there every day. They are an insider. We trust that person,” Lorson said.

The long-term effects of drug education are difficult to measure. Tim Bruckner, an associate professor of public health at the University of California at Irvine who has analyzed prevention programs in other states but is not familiar with Ohio’s efforts, said effectiveness is based on many conditions, including funding, enforcement of best practices and engaging, interactive delivery.

“It’s really hard to change people’s behavior or delay initiation of adverse behavior,” he said. Only 10 percent of substance-abuse-prevention programs used in middle and high schools show evidence of effectiveness, he said.

But the stakes are visible every day in Washington County, where Belpre sits near Ohio 177, a highway for heroin and cheap methamphetamines from Mexico, according to Josh Staats, a lieutenant with the Washington County sheriff’s office.

Earlier this year, 11 high school students in the region tested positive for methamphetamine. And a lab reported a batch laced with fentanyl. Crystal methamphetamine is cheap and abundant.

“I don’t know if HOPE is the magic bullet,” Lorson said. “But the focus on these key concepts and skills has given folks a place to rally around.”

Leonard Pitts: ‘Faith’ sometimes has little to do with Jesus