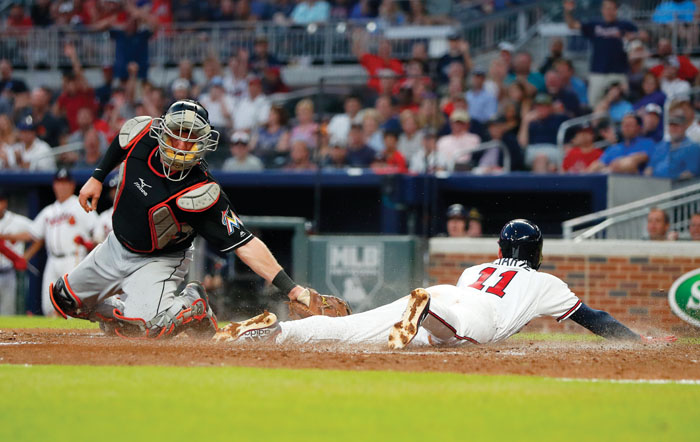 Atlanta Braves' Ender Inciarte (11) beats the tag from Miami Marlins catcher Bryan Holaday (28) to score from third on a Dansby Swanson bunt during the sixth inning of a baseball game Saturday, May 19, 2018, in Atlanta. (AP Photo/John Bazemore)

Ender Inciarte went 3 for 4 and Freddie Freeman added a two-run homer in the eighth to help Atlanta win for the eighth time in 11 games and hold onto the NL’s best record at 27-17.

Newcomb (5-1) had thrown 21 consecutive scoreless innings, the longest active streak in the majors, before the Marlins took a 1-0 lead in the second when Justin Bour singled, advanced to third on Cameron Maybin’s double and scored on a groundout. Newcomb allowed four hits and two walks with four strikeouts. He is 4-0 with a 0.36 ERA in four starts this month.

Jose Urena (0-7) lost his eighth straight decision. The Marlins have lost each of his 10 starts this year and 12 straight overall to match the longest streak in club history, set by Brian Moehler from 2006-07.

WASHINGTON (AP) — Matt Kemp had a pinch-hit, two-run double in the ninth inning, and the Los Angeles Dodgers survived a sterling performance by Max Scherzer to beat the Washington Nationals 5-4 on Saturday night and sweep a day-night doubleheader.

Scherzer struck out 13 in seven innings, and Washington led 4-3 entering the ninth. But closer Sean Doolittle (1-2) allowed singles to Austin Barnes and Logan Forsythe, and Kemp then hit a line drive to the wall in left field to score them both.

Erik Goeddel (3-0) worked a scoreless eighth in his Dodgers debut after being acquired off waivers on Friday from Seattle Mariners. Kenley Jansen worked the ninth for his eighth save, and his second on the day.

The Dodgers used eight pitchers. Starter Rich Hill threw just two pitches before leaving with a recurrence of the blister on his left middle finger that has already put him on the disabled list twice this season.

In the first game, Ross Stripling (1-1) struck out a career-high nine in six strong innings and Max Muncy drove in two runs as the Dodgers won 4-1.

Tanner Roark (2-4) took the loss for the Nationals, who lost left fielder Howie Kendrick to a right Achilles tendon injury in the eighth inning.

Benintendi added a two-run single and Rafael Devers a solo homer for the Red Sox, who won for the third time in four games and improved to 5-1 against Baltimore this season.

Pedro Alvarez hit a two-run homer for Baltimore, which snapped a 13-game road losing streak a night earlier against Boston.

NEW YORK (AP) — Devin Mesoraco hit a tying, two-run homer through Citi Field’s murky fog in the eighth inning, Wilmer Flores hit a game-ending sacrifice fly in the ninth and the Mets beat the Arizona Diamondbacks to win consecutive games for the first time in a month.

Aaron Hicks and Giancarlo Stanton also homered for the Yankees, while Luis Severino (7-1) scattered three runs on eight hits and two walks over six innings to run his unbeaten streak to seven. The right-hander is 5-0 with two no-decisions since losing to Boston on April 10.

Alfaro was scratched with right knee soreness after originally being in the lineup. He was removed from Friday night’s game.

Herrera extended his streak of reaching base to 45 consecutive games with his home run in the third inning.

The reigning AL Cy Young Award winner made his 22nd straight start of allowing no more than three earned runs, breaking the team record set by Sonny Siebert in 1965.

CINCINNATI (AP) — Ian Happ hit his second home run of the doubleheader, Jason Heyward tied his career high with four RBIs and Jose Quintana allowed one hit in seven shutdown innings as the Chicago Cubs beat the Reds for a split.

Quintana (5-3) kept the Reds hitless through four innings before Scott Schebler singled cleanly with one out in the fifth. Quintana struck out seven and didn’t allow a runner past first base.

In the first game, Billy Hamilton drew a bases-loaded walk from Justin Wilson (1-1) while batting against a five-man, drawn-in infield with no outs in the 11th inning and the Reds outlasted the Cubs. Dylan Floro (1-0) earned his first career win with two relief innings.

Abreu went 3 for 3 with a walk and two RBIs. Daniel Palka added a two-run triple for Chicago, which has won two of three.

Jurickson Profar had a double and two RBIs for Texas.

MINNEAPOLIS (AP) — Christian Yelich broke a tie with a solo home run in the top of the eighth, Milwaukee’s bullpen pitched five scoreless innings, and the Brewers beat the Twins to take the first two games of the three-game series.

Crawford reached on a bloop single in the second inning, had a two-run double in the third and hit a two-run homer in the sixth. He is 31 for 69 (.449) in May.

Pinder’s drive off Tyler Clippard (4-1) completed the Athletics’ comeback from a 4-0 deficit.

Emilio Pagan (1-0) worked two innings for the win and Blake Treinen got his 10th save.

Toronto has lost 11 of 14 at home, including the past five straight.

Richard (3-5) pitched into the eighth inning for a third straight start after allowing a combined five runs and 12 hits in his previous two. The left-hander gave up seven hits with two strikeouts, and had 65 strikes on 84 pitches.

Jose Pirela also had two RBIs for the Padres, who have won two straight games and three of their past four. Villanueva’s 11th home run gave San Diego a 4-0 lead with two outs in the eighth inning.

The Pirates lost a second straight game after winning eight of their previous nine. Rookie right-hander Nick Kingham (2-1) gave up three runs on five hits for the first loss of his major league career.