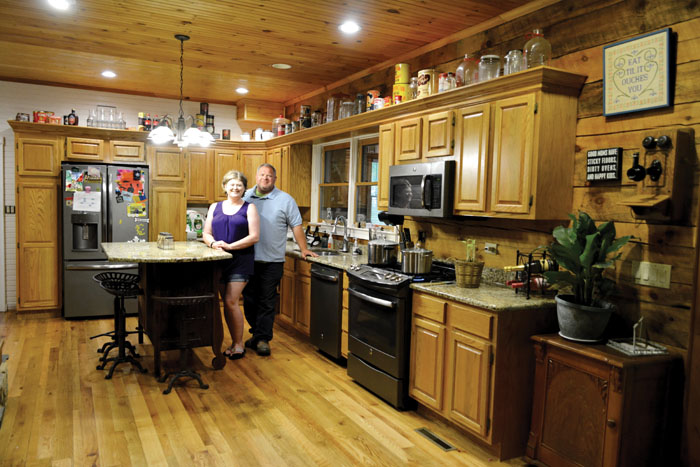 Emily Yarbrough and her family moved into her grandparents’ house three years ago.

While not particularly eloquent, Graham is not inaccurate. Emily, 40, and her husband, Matt, 43, are carrying on the legacy of Emily’s grandparents, Pete and Marie Walker.

And that legacy is collecting.

When Marie was a girl, she once had to stand in line to receive a pair of new shoes. She swore she’d never do that again. She ran Peter Pan Daycare in Enochville for 42 years. Pete retired to help her.

And Marie began to buy what she couldn’t afford as a child. She and Pete went to yard sales and auctions and general stores and anywhere else she wanted to go.

In the early 1970s, she and Pete bought a 65-acre tract of land off Highway 152 East, which the family lovingly refers to as “the compound.” Three of the Walkers’ four children and their families eventually settled there. The Walkers built a cozy log cabin on the property in 1986.

“But her family was growing,” Emily says. “She needed more room for her family — and her stuff, I think.”

Pete died in 2013, with Marie following 10 months later. A year later, the family had five auctions to clean out the house, before the Yarbroughs moved in that summer.

“To my mother, family was everything,” says Emily’s mom, Debbie Beaver. “My mother never had favorites, but Emily is a lot like momma. They liked a lot of the same things. Emily wants it whether she’s got room for it or not! She has a lot of me and Momma in her.”

But Emily and her family have worked hard to clean out their basement.

Griffin, 10, is especially pleased with the progress the family has made.

And that’s true. But Marie’s extensive toy collection still takes up a solid corner of the basement.

Also there is a neon Hot Doughnuts Now sign that Emily had custom-made for Matt for a recent birthday.

“Matt loves Krispy Kreme,” Emily says, as her children, including daughter Gentry, 8, scramble to pose in front of the sign for a photo.

The basement — and the sunroom with three dining tables always at the ready — is a frequent gathering spot for Emily’s immediate family. Altogether, there are 34, as Emily is one of eight first cousins, and their families are growing.

Emily’s sister, Elizabeth Gillis, recently moved from the compound with her family to High Rock Lake.

“Danny’s always wanted to live at the lake,” Emily says of her brother-in-law. Aunt Rosie is moving into their farmhouse, which was an original dwelling on the property.

Emily and Matt went to auctions with her Mommaw and Poppaw Walker before they got married. And Matt helped Pete build the house he now lives in. His mom, Pamela, was an avid collector in her own right. She especially loved pigs.

“I’ve always liked antiques,” Matt notes. Most of the furniture in their home is oak.

Emily loves old linens and oak furniture, and has a special weakness for quilts, she says, just like her Mommaw.

Graham collects sports memorabilia and baseball cards in particular. Griffin likes shoe polish items bearing his name. It’s a little harder to find anything with Gentry’s name on it, her mom admits. All of their children have family names.

An upstairs den serves as a hangout for the kids. They all have their own bedrooms upstairs, and Matt and Emily converted a fourth L-shaped bedroom to a laundry room and bathroom for the boys — it even has its own urinal.

After they moved in, Matt and Emily painted the entire house and let the children pick their bedroom colors — light purple for Gentry, light gray for Griffin, and Carolina Blue for Graham.

Gentry has her own bathroom, which features an iron tub which her grandmother Debbie reglazed and sponge painted for her.

“I don’t take showers,” Gentry says, although there’s a separate shower in her bathroom.

Matt and Emily also refinished the oak floors on the first and second floors, and gutted the kitchen, putting in new oak cabinets, appliances and granite countertops. Matt, who works for Piedmont Natural Gas, does most of the cooking. Emily works two to three days a week at Gateway Surgery Center, and shuttles the children to all of their activities: Scouts for all three, gymnastics for Gentry, piano for Gentry and Griffin. And sports. Graham just finished track at China Grove Middle School and Gentry is playing softball in China Grove.

They also recently completed a three-bay garage, which holds Matt’s tools and, you guessed it, more of Emily’s stuff.

Is there any room for vehicles?

Matt gets a look on his face like, “You’ve got to be kidding.”

Matt and Emily have also been working on a beach house they purchased at Little River in 2016. George and Debbie have had a home there for years.

“We’ve got one house in between us,” Matt notes. “So I’m neighbors with my mother-in-law here and there.”

But he smiles as he says it.

At their beach home, they’ve put in new flooring and knocked out walls to open up its floor plan.

“There’s always something to do,” Emily says.

Emily gets her industriousness from both of her grandmothers, she says. Her paternal grandmother, Betty Beaver, died Dec. 26, and her grandfather, Grover Beaver, now makes his home with Emily’s parents.

“They were independent women, and they wanted things done the right way,” she says.

Blooms are lighting up Hurley Park