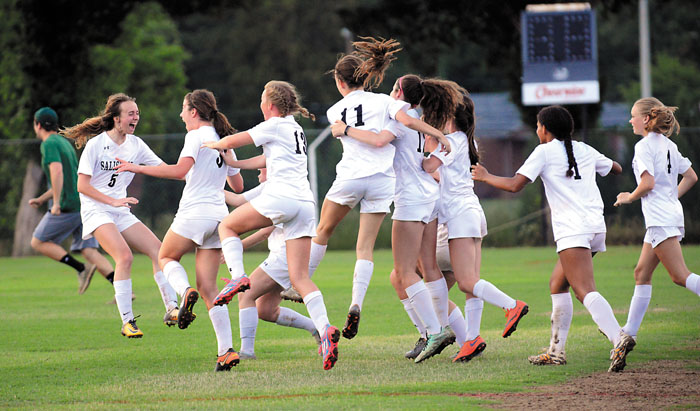 Wayne Hinshaw/for the Salisbury Post ... Salisbury’s soccer team celebrates as the clock expires on its 2A state playoff match with Forbush, Saturday evening at Ludwig Stadium. The Hornets won, 1-0, to advance to the Western Region final — at home Tuesday night against Lake Norman Charter.

SALISBURY — The spring’s most amazing story keeps getting better.

Don’t look now, but the gap between Salisbury’s unbeaten girls soccer team and a 2A state championship has been narrowed to two victories. Saturday’s 1-0 fourth-round triumph over visiting Forbush means the Hornets have successfully mapped a route to the semifinals.

“We are treading in unknown waters,” coach Matt Parrish said. “We just tied the school record for most consecutive victories. We just exceeded the total number of victories for the men’s 2011 state championship team. And we just beat a team that handled us the last two times we’ve played them — and they did it so convincingly that nobody was really upset.”

Salisbury (25-0) received a goal from freshman Caroline Cardelle in the 14th minute and made it stand against Forbush (23-3-1), a team that had posted 23 shutouts and not allowed a goal since April 4. Salisbury will host Lake Norman Charter on Tuesday night.

“Score early and set the tone,” midfielder Piper Muire said. “That was our game plan. Then we sort of forced our style of play on them. We weren’t going to let them dictate anything.”

It was another command performance for the Salisbury midfield and defense, which frustrated the Falcons time and again. Each team launched 11 shots and each goalkeeper — Salisbury’s Emily Mann and Forbush’s Dezie Taylor — made six saves.

“It’s hard for us to walk away,” said losing coach Kenan James. “We would have liked to make a better showing of ourselves, but we couldn’t get a handle on it tonight. This wasn’t our type of game. Of course, Salisbury had a lot to do with that. (Muire) wins everything in the air and (defender Lillie Rusher) banged every ball 30 yards downfield. It made it difficult to play our style.”

Blame Parrish. The longtime mentor has three state championship rings in his jewelry box — earned as a boys coach following the 2011, 2013 and 2015 seasons — and would love to add another. So he concocted a strategy designed to befuddle the Falcons.

“Our game plan was to try to do something against them that very few teams have done,” he said. “And that was to come right out and play them straight up. We wanted to go at them right off the bat. We weren’t gonna put 10 girls behind the ball. We went right at them with a 4-4-2 formation.”

It was a daring strategy, one that easily could have backfired. Instead, Parrish emerged as the best chess player at Ludwig Stadium.

“If they had the same pressure and tenacity in the first 10 minutes that they had in the last 10 minutes, maybe we’re down 2-0 and I’m the dumbest coach on earth,” Parrish said. “But the game plan was to see if we could score the first goal. And if we could, to then play more of a prevent defense and put more girls behind the ball.”

The lone score came on a lovely centering pass from Freya Obermueller, who beat a defender on the right side and fed the ball to Cardelle stationed unguarded some eight yards in front of the goal.

“I’ve had a couple of goals like this one — where I was totally unmarked in the middle of the field,” Cardelle said. “This time I almost tripped. I ran up the field and stumbled right when I got to the front of the net.”

Somehow, she kept her balance and tucked a shot behind Taylor just 13:51 into the match.

“I think they were so worried about Freya, because of her reputation,” Cardelle explained. “They weren’t even looking for me.”

Parrish indicated that James and Forbush assistant coach David Marcincavage had scouted Salisbury’s third-round win against C.D. Owen on Wednesday night — when the electric Muire was a Stratocaster on the front line, delivering a brain-frying solo.

“She was making run after run after run,” Parrish said. “We knew they had seen that and would try something to shut Freya down, which they did. They powered her, they shouldered her off the ball. That was their game plan. If I’m coaching against Salisbury, I’m gonna try to take out the German girl.”

Senior midfielder Julia Honeycutt was back in the SHS lineup and back in form. She was thwarted twice in a two-minute span in the first half — first when her elevated blast from close range was fingered away by Taylor — and again when a corner kick rebound pin-balled her way moments later. This time her low drive through traffic was swallowed by Taylor.

“We knew we’d get a goal or two against this team,” Honeycutt said after playing more than half the match. “Two years ago, I scored twice against them. We just needed a chance.”

In an attempt to fortify Salisbury’s defense, Honeycutt was moved to left back with about six minutes to play. The switch paid off in the final 30 seconds, when Honeycutt sprinted 40 yards left-to-right on a diagonal line and beat Emily Marcincavage and two other Forbush attackers to a loose ball. “That’s the reason I was moved back there,” she said. “That was my job. And the last 20 minutes, we played a lot of defense.”

NOTES: Salisbury’s next dance partner is No. 2 seed Lake Norman Charter (21-0-1) at home on Tuesday. The Knights have won 20 straight matches, allowed only seven goals and recorded 15 shutouts, including Friday’s 2-0 fourth-round win over Hendersonville. The state championship is scheduled for next Saturday at N.C. State’s Dail Stadium.