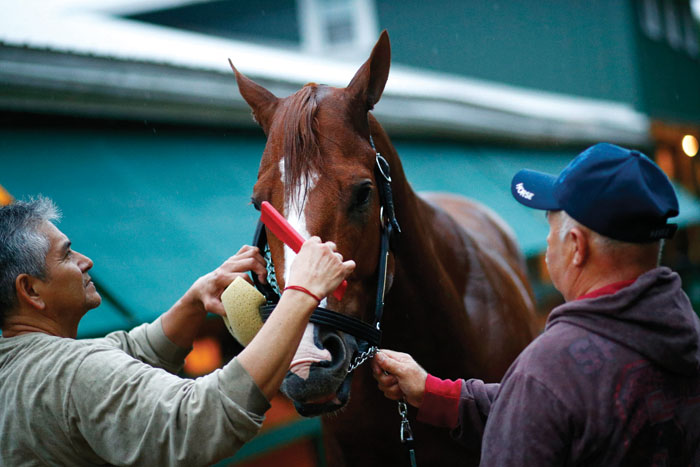 Kentucky Derby winner Justify is cleaned outside a barn, Friday, May 18, 2018, at Pimlico Race Course in Baltimore. The Preakness Stakes horse race is scheduled to take place Saturday, May 19. (AP Photo/Patrick Semansky)

BALTIMORE (AP) — Opposing trainers at the Preakness always want to see the Kentucky Derby winner up-close and then set their sights on trying to beat that horse.

This year, they can see Justify. They just don’t know if they can beat him.

There’s such a sense of awe about Justify and an aura around the heavy favorite that it’s clear it’ll take something significant to beat him. Watching Justify hold off Good Magic in the Derby impressed trainer Chad Brown enough to calm his expectations.

“I was very impressed with (Justify) how well he ran from gate to finish,” Brown said. “I’m confident my horse will run well, but I’m also very aware what a tall order this is to try and turn the tables on a horse like him.”

Turning the tables on Justify and cutting short his Triple Crown bid won’t be easy. The consensus around Pimlico Race Course is if Justify simply runs his race, he’ll win the Preakness and head to the Belmont Stakes on June 9 with the chance to give trainer Bob Baffert another Triple Crown victory — his second in four years after American Pharoah captured it in 2015.

Justify will have to regress back to the pack for any of the other seven horses to finish first.

“If he runs his race, if he shows up — I think every trainer, that’s all we hope for,” Baffert said. “I feel good. Right now I feel confident that he’s going to show up.”

Only a handful of things could reasonably derail Justify, a 1-2 morning-line favorite who is 4-0 and has won his four starts by a combined 21½ lengths. He showed something more by running such an impressive race in the mud at Churchill Downs in the Derby on May 5. It has rained all week in Baltimore, and more on Saturday should make for another sloppy track.

The other concerns are if Justify’s bruised heel gets irritated from a couple of days working out in mud and how the surface might complicate the start.

Baffert has been harping all week on the break being the most important part of the race. Even if he’s not as worried as he was when the field was 20 horses in the Derby, it’s the thing he’s most nervous about.

“I want him to leave the gate well and after that, what happens, happens,” said Baffert, who’s 4-0 with Derby winners in the Preakness. “We have to worry about something. It’s not like I’m just sitting there like, ‘OK we’ve just got to get around there.’ We still have to get around there.”

Drawing the same post No. 7 he won the Derby puts Justify in an advantageous spot. He should be able to avoid getting caught up in traffic trouble out of the starting gate. He’s far from D. Wayne Lukas’ unpredictable Sporting Chance and won’t be trapped inside.

“He’s a big horse, and I think Bob would like to see him get in a rhythm,” said Elliott Walden of WinStar Farm, which co-owns Justify. “It’s a little easier to do from the outside. If he gets slammed leaving there as everybody tries to work down to the fence, sometimes you can get sucked back if you break a step slow. So I think he’s happy that he’s out there.”

Baffert is happy that the bruise on Justify’s left hind foot hasn’t been a problem for more than a week now and hasn’t bothered the colt during his morning workouts at Pimlico since arriving Wednesday. If Justify breaks clean and gets over the 1-3/16 mile race with no discomfort in that heel, even the strongest competitors are likely running for second.

If anything goes wrong, Brown’s Good Magic and new challenger Quip are best-positioned to take advantage of any misstep by Justify. Good Magic ran pretty much his best and came up 2½ lengths short in the Derby.

Lukas, who is tied with Baffert with six Preakness wins and has Bravazo along with Sporting Chance in this field, has been watching Justify almost every day and can’t say enough positive things. But after watching favored horses like Fusaichi Pegasus lose in the 2000 Preakness, Lukas knows from decades in horse racing that Justify isn’t unbeatable.

“It’s his race to lose,” Lukas said. “Give him a chance to run — give him a clear shot at it and everything, I definitely think he’s going to be very difficult to beat. … If you’re going to bet on the fastest horse and the most powerful, you better bet on him.”