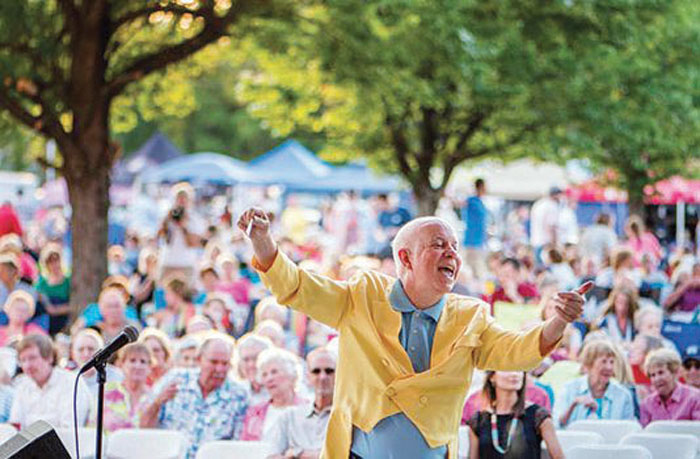 SALISBURY — The 14th annual Pops at the Post concert is coming June 2 with the promise of good food, good friends and some even better music.

Festivities begin at 1 p.m. with tailgating, with spots available through ticket purchase. Spots were sold out as of May 18.

Excluding tailgating, the concert is free, and all are welcome to set up lawn chairs or blankets to view the show from the 100 block of South Church Street.

For those not tailgating, food vendors will set up along Fisher Street by 4 p.m.

Music will begin with a pre-concert performance by the Salisbury Swing Band from 5 to 7 p.m.

And then it’s on to the main event: a Salisbury Symphony performance from the Salisbury Post loading dock, which begins at sundown about 7:45 p.m.

David Hagy, maestro of the symphony, said this year’s song selection is meant to celebrate both history and the future.

By the future, he means the near-future of Pops at the Post’s very location:  the soon-to-be home of Bell Tower Green.

“We know that the park is going to break ground the Monday after Pops, so I just took the word ‘park’ and went with that,” said Hagy. “We are going to present four pieces together that have to do with the park.”

He said most of the pieces pertain to the dreams for an ideal park: “Saturday in the Park” by Chicago and “MacArthur Park,” for example.

“That’s just a description of exactly what we want this park to be,” he said.

Hagy said the symphony also has visions of performing mini-concerts in Bell Tower Green, which could feature “The Thunderer March,” another song from the 2018 set list.

From there, dreams turn to nightmares with the theme from “Jurassic Park.”

“What’s a little humor, after all?” said Hagy.

Other songs will celebrate the nation’s history from 100 years ago, 50 years ago, and now. The symphony will play the postwar song “Over There” by George M. Cohan, “Hey Jude” by the Beatles, and a medley of songs from the musical “Hamilton.”

There will be more nods to times gone by: “Hello, Dolly!” featuring four singers in honor of Pearl Bailey. Antonín Dvořák’s “Symphony No. 8” will be in memory of local philanthropist Bill Stanback and the symphony’s late principal cellist, Anne Selletti, who died in 2016.

And there will be more celebrations of the future and the symphony performs “Bell Tower March,” a composition by John Stafford, director of music at First Presbyterian Church.

“Lucky 13th”: Annual Pops at the Post all about…