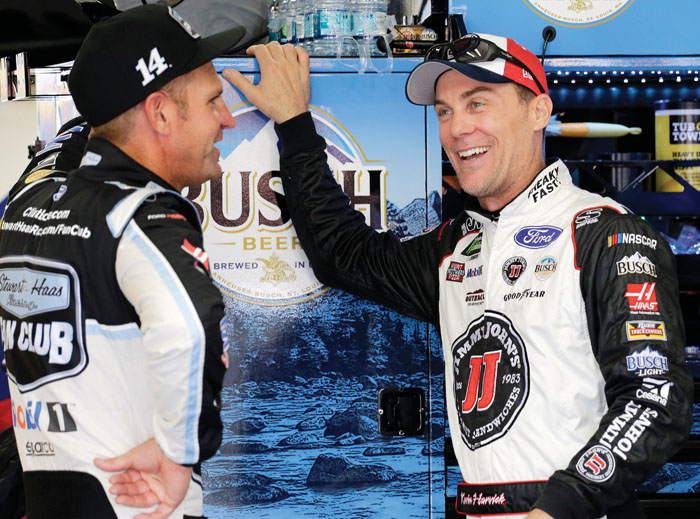 CONCORD (AP) — Matt Kenseth is hoping Friday night’s qualifying is a sign better times are ahead.

Kenseth agreed to return to race on a limited schedule this year for his original team after being dumped by Joe Gibbs Racing last year. He will start alongside RFR teammate Ricky Stenhouse Jr. on the front row.

“I’m just getting started, so I am still in the catch-up mode,” Kenseth said. “I’m trying to get caught up to Ricky and just get running.”

Kenseth started his full-time premier series career with the Roush team in 2000 before leaving for Joe Gibbs Racing in 2013.

However, his contract wasn’t renewed after struggling last season.

He agreed in April to return to Roush Fenway Racing, where he will split time in the No. 6 Ford with Trevor Bayne for the remainder of the season. Kenseth’s first race was last week at Kansas, where he wrecked with 15 laps to go.

Kenseth believes capturing the pole will be a shot in the arm for Roush, which has struggled this season to compete with the top cars.

Fords claimed six of the top 10 spots in qualifying.

Kevin Harvick, who comes in as the hottest driver in the field with five Cup Series wins including the last two, at Dover and Kansas, qualified fourth in his quest to take home the $1 million first-place prize.

RESTRICTOR PLATES: For the first time ever, cars will run a restrictor plate similar to those used on the big speedways in Talladega and Daytona.

The cars will also carry a six-inch spoiler on the rear deck, a 2014-style front splitter and aero ducts with the idea to increase the passing opportunities. NASCAR had some success with that setup in the Xfinity Series, which used a similar package on the 2.5-mile Indianapolis Motor Speedway last year, producing a record-setting number of lead changes.

THE FORMAT: This year’s All-Star race will feature a four-stage format — 30 laps, 20 laps and 20 laps followed by a 10-lap shootout.

TOUGH TO REPEAT: Kyle Busch won last year’s All-Star race, but history suggests he will have a difficult time repeating. Since 1998, only four-time All-Star champion Jimmie Johnson has scored multiple victories in the event.

“Way, way slower,” Busch said of his car this year. “Everything all around. I think obviously the cars are just slower to begin with, but I think I was just a little tentative to it, which is what you’d expect, I guess, with no practice. I think it’s gonna be a crapshoot on how this race goes and how it plays out.”

NEED A WIN: Former Cup Series champion Brad Keselowski is 0 for 9 in the All-Star race, while Martinsville Speedway winner Clint Bowyer is 0 for 8 and reigning series champion Martin Truex Jr. is 0 for 6.

THE FIELD: The field will include all 2017 and 2018 Cup Series race winners, plus former series champions and former All-Star race winners that are still competing full-time. The three stage winners from the Open race on Saturday will also transfer to the main event.

No stage will end under yellow flag conditions and only green flag laps count in the fourth and final stage.