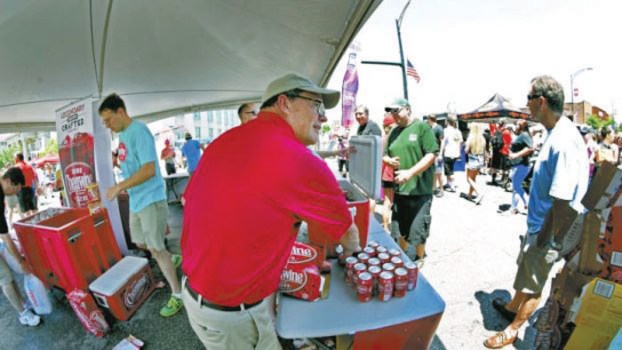 Cliff Ritchie working in one of the 3 free Cheerwine drink booths. photo by Wayne Hinshaw, for the Salisbury Post

Cheerwine Festival coming to downtown Salisbury on Saturday; some streets to be closed to traffic

SALISBURY — Several downtown streets will be closed to traffic during the second annual Cheerwine Festival, which runs from 10 a.m. to 8 p.m. today between Bank and Liberty streets.

There will also be activities on Fisher, Innes and Council streets. Music and other entertainment is planned.

• The 200 block of North Main Street between Liberty and Council streets.

After the festival, roads could be closed until 1 a.m. Sunday.

The 100 blocks of East and West Innes Street will reopen at 9 tonight. The roads will reopen sooner if they are cleared of vendors and festival materials.

Parking will be available in some private lots, on the street and in public lots downtown.

Satellite parking will be available at Rowan-Cabarrus Community College and West End Plaza.

Cheerwine will not be free this year, but proceeds from all canned drinks sold at the official Cheerwine tent will go toward Rowan Helping Ministries.

All cans recycled at the festival will go to Faithful Friends Animal Sanctuary.

For more information about the festival, visit salisburync.gov/cheerwine.

SALISBURY — A discussion about a travel reimbursement request escalated into accusations of racial bias during the public-comment period at... read more