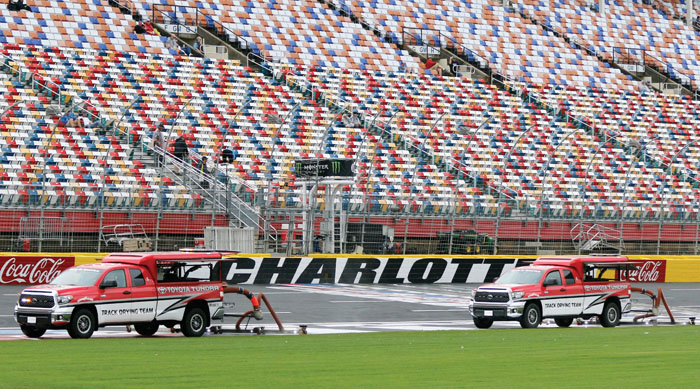 CONCORD (AP) — NASCAR’s annual All-Star race is a $1 million winner-take-all spectacle that has failed for years to live up to the hype.

Radical rules changes have been implemented for Saturday night’s race — rules that might help NASCAR’s stars stop Kevin Harvick’s winning streak — and it is supposed to dramatically improve the action.

“I think it’s going to be intense. The draft will be big,” Daytona 500 winner Austin Dillon said. “It’s going to be what the All-Star race is supposed to be — a wild mess.”

That could very well be the result of this package that includes horsepower-sapping restrictor plates. But rain most of the day Friday at Charlotte Motor Speedway prevented drivers from getting much of a feel for what kind of race is ahead.

“We were all hoping for more track time to be able to filter through the information. Anytime the weather restricts you from track time it hurts,” Kurt Busch said. “A lot of things are going to be juggled this weekend.”

To shake things up this year and try to create more passing, NASCAR pulled out the plates that are generally used only at superspeedways and chose a six-inch spoiler. The thought is the leader won’t be able to jump out to a large aerodynamic advantage, and the cars will run in tighter packs. NASCAR tried a similar experiment last year in the Xfinity Series race at Indianapolis Motor Speedway and the racing was well received.

But Charlotte is only 1.5-miles and the potential for pack racing created many unknowns — and not everyone is certain they are going to like the product.

“It’s not necessarily what I signed up for to be a race car driver, to bring the whole field closer together and have it dictated by some type of a plate race,” Kyle Busch said. “But if that’s what we’re going to have going forward, then I guess I either need to think about how to get really good at it or getting out of (racing) so we’ll see what happens.”

Saturday night’s field will have 21 drivers. It is comprised of 17 previously qualified drivers, three who will transfer in from a qualifying race, and the winner of a fan vote. The fan vote winner is expected to be Chase Elliott, the son of Bill Elliott, one of the most popular drivers in NASCAR history.

All will be chasing Harvick, who has a Cup-high five victories, including two in a row. He’s also won the event before, in 2007, and was second in 2014 and 2015. Harvick is the leader of a rejuvenated Ford program, which has won seven of 12 Cup races this season. Ford drivers have combined to lead 59 percent of the laps and have won 17 stages.

But Kyle Busch is the Cup Series points leader, even though he trails Harvick by two victories. He’s realistic about where his Toyota team stacks up against Harvick, and isn’t sure an anything-goes race will make a difference in being able to catch Harvick.

The All-Star race will be broken into stages of 30, 20, 20 and 10 laps. Overtime rules will be used at the end of stages so that no stage will end under caution. Only green-flag laps will count in the final 10-lap sprint to the finish.