Vasilevskiy, Lightning top Caps 4-2 to even East final 2-all 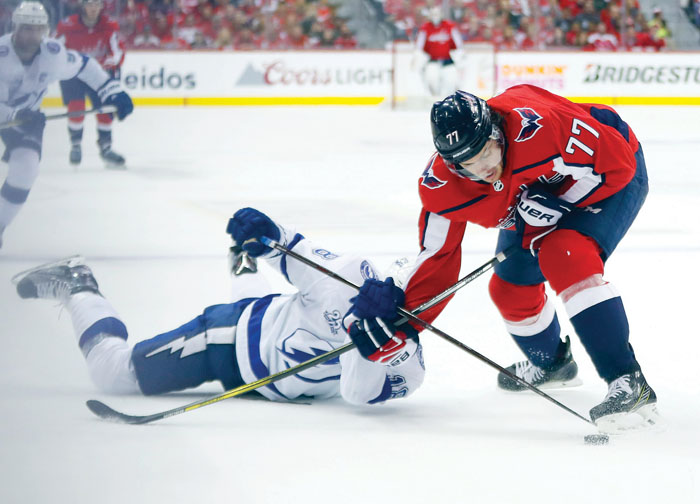 By HOWARD FENDRICH, AP Sports Writer
WASHINGTON (AP) — Jon Cooper’s Tampa Bay Lightning won Game 4 of the Eastern Conference final despite going the equivalent of more than a period without a shot on goal.
They won despite falling behind about 4 1/2 minutes into the game.
They won despite being called for three penalties — one right after the other — late in the first period, allowing Alex Ovechkin and the rest of the Washington Capitals’ prolific power play to get all that time to operate.
And they did it, mainly, thanks to Andrei Vasilevskiy, who made 36 saves and kept things close until Alex Killorn scored the tiebreaker with about 8 minutes left, lifting Tampa Bay to a 4-2 victory over Washington on Thursday night, evening the series at two games apiece.
“When you don’t have your ‘A’ game, you need your goalie to have his ‘A’ game,” Cooper said. “And he sure did.”
Now the Lightning will host Game 5 on Saturday night, with Game 6 back in Washington on Monday.
The road team has won every game in the series so far.
“It’s pretty bizarre,” said Steven Stamkos, who took a puck of the face during the morning skate, then went out and scored a power-play goal that gave Tampa Bay a 2-1 lead after the first period. “We’ve got to find a way to win one at home.”
The Capitals might be thinking the very same thing. After all, they fell to 3-5 in the nation’s capital this postseason, while they are 7-1 in away games.
On Thursday, they even got booed — yes, a smattering of jeers rang out in the team’s first conference final in 20 years — late in the first period after failing to convert any of the trio of man-advantage chances.
That stretch was part of a chunk of nearly 21 full minutes of game time — the last 10:41 of the first period, followed by the initial 10:11 of the second — during which Tampa Bay never putt a single official shot on net.
“Our guys were gassed. That’s a lot of stress. Mental stress. The same guys are on the ice the whole time. Other guys aren’t playing,” Cooper said. “You kind of lose your whole rhythm.”
And so it was vital that Vasilevskiy played just like the Vezina Trophy finalist he is.
He was spectacular at times, including stops against Chandler Stephenson on a breakaway and Nicklas Backstrom — who returned after missing four games with an injured right hand — from the doorstep in the second period. In the third, Vasilevskiy used his left glove to swat away a try from Brett Connolly.
Following one flubbed chance, Ovechkin threw his head back and looked up, the very picture of disappointment.
After allowing 10 goals in Games 1 and 2, Vasilevskiy has given up a total of four in Games 3 and 4.
“He didn’t play great in the first two. He played well in the second two. It’s our job to make him look like the goalie from the first two games,” Washington forward Tom Wilson said. “We’ll make it hard on him.”
Capitals goalie Braden Holtby didn’t get a chance to make nearly as many saves, given the shot discrepancy: Washington ended up with 38 to Tampa Bay’s 20. And Holtby allowed goals on two of the first five shots he faced, to Brayden Point and to Stamkos. Anthony Cirelli added an empty-netter with a second left.
The go-ahead goal came thanks to a defensive breakdown, when Killorn was left pretty much alone and scored 6 seconds after a Tampa Bay power play expired, putting in a pass from Ondrej Palat.
“Tonight was so important,” Killorn said. “Going down 3-1 in a series is tremendously different from 2-2.”
After his score, Killorn said, “We played our best hockey.”
That’s true.
Washington’s goals had come from Evgeny Kuznetsov — off an assist by Ovechkin — in the second period, and defenseman Dmitry Orlov in the early going. But late, the Capitals could not get the tying goal in, even after pulling Holtby with a little more than 2 minutes to go so they could play 6-on-5.
“Of course,” Ovechkin said, “it’s a missed opportunity.”
NOTES: Stamkos has one power-play goal in each game of the series. … The Lightning have produced 11 power-play goals over their last nine games, with at least one in each. … Lars Eller was whistled for both of Washington’s penalties and has five in the past two games. “That was way too many,” Capitals coach Barry Trotz said. … Kuznetsov’s 21 points equaled Ovechkin (2009) for the most by a Capitals player in one postseason.
___
For more NHL coverage: https://apnews.com/tag/NHLhockey