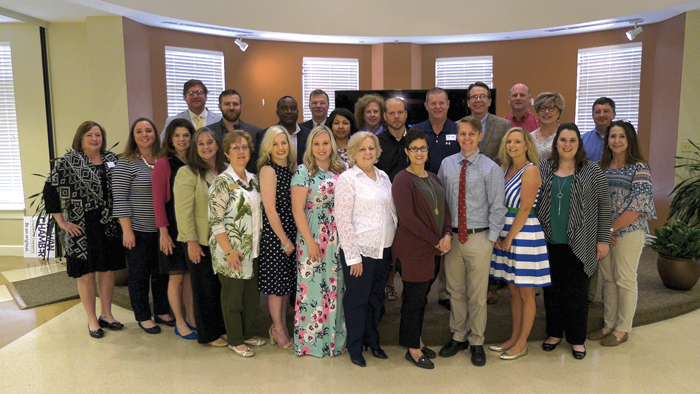 “I worked at Bi-Lo grocery store,” Charleston said. “That was my first job, and Quincy’s Steakhouse was my second job.”

But he said things in the local and national economy have changed a lot since he lived in Rowan County.

Charleston now lives in Washington, where he is director of state and local fiscal policy engagement at the Urban Institute.

On Thursday, he was the speaker at the final Chamber of Commerce Power in Partnership breakfast of the season, which doubled as the graduation ceremony for the 25th Leadership Rowan class.

In Charleston’s job at the Urban Institute — as well as in others he’s held — he has used research to see how the evolution of the global economy is affecting the country at the national and local levels.

Charleston said some technological advances people think of as “fantasy” are now reality, including self-driving cars, food delivery robots and humanoid robots that can adjust to changing conditions.

“There will come a time when you look over on the highway and there will not be a person in that semi-truck next to you,” Charleston said. “All of these technologies are moving even faster than we imagined they could move.”

Charleston said advances in technology will likely create as many jobs as it will destroy.

“But where are those jobs? They aren’t in Main Street America. They’re in Silicon Valley. They’re in Seattle. They’re in Boston,” Charleston said. “So don’t take me wrong, technology creates immense opportunity. But the question is where is that opportunity and for whom? Who is left behind?”

Charleston said technology will go beyond replacing jobs in manufacturing and manual labor.

He said retail salespeople, restaurant workers and cashiers will be at risk of losing their jobs to automation.

“How do we make sure that the jobs of the new economy are coming to your community?” Charleston asked.

Rowan County needs to figure out a few major things, he said, including whether its industries are diverse enough; how it can confront labor force shifts from old jobs to new; and whether its education, business and nonprofit institutions are adaptable to “new realities.”

“Those are the things we have to confront if we want to lead in this new economy,” Charleston said.

In addition to Charleston’s presentation, the breakfast featured the graduation of the 25th Leadership Rowan class.

Twenty-seven people walked across the stage at Trinity Oaks — where the breakfast was held — and accepted certificates from Janet Spriggs, chairwoman of the Chamber of Commerce board.

Leadership Rowan is a nine-month program through the chamber that requires an application process.

The class meets once a month to learn about community issues, develop leadership skills and get involved with community organizations.

Anyone who is interested in being a part of the 26th Leadership Rowan class should contact Mary Scott Norris at the Rowan Chamber of Commerce, 704-633-4221 or msnorris@rowanchamber.com.