More than 250 people turn out for ‘Ministers of Comedy’ fundraiser 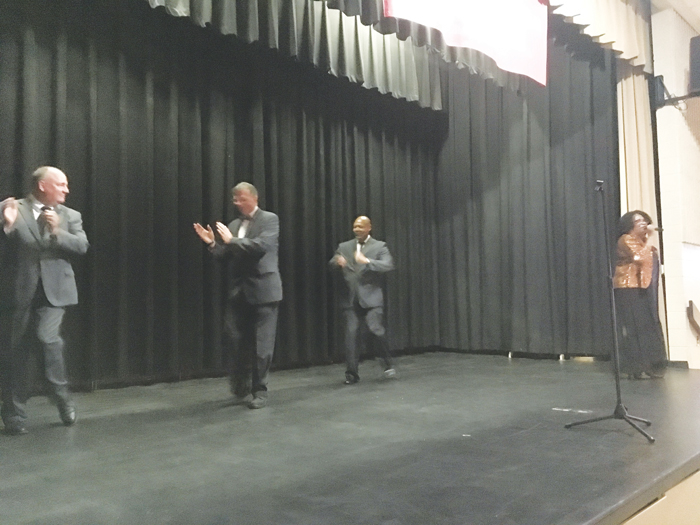 SALISBURY — Deedee Wright and Emily Perry didn’t know what turnout to expect for the “Ministers of Comedy” fundraiser.

“I was hoping,” Wright said. “And when I came in earlier to see the setup, they had put out 300 chairs. And it just looked so huge. And so I said, ‘Take some of the chairs down.’”

Within the first few minutes of the show starting, volunteers had to bring those chairs back.

The first annual “Ministers of Comedy” show, held Thursday night at the Civic Center, was a fundraiser for the first phase of the Dixonville-Lincoln Memorial project.

“And I can’t thank the community enough for coming together. I mean, I see people there who I haven’t seen in years,” Perry said. “So this has just been so powerful. It’s almost a tear-jerker.”

So far, the task force — with the help of member Betty Dan Spencer — has been able to identify more than 500 African-Americans who were buried in Dixonville Cemetery whose gravestones had been eroded or destroyed.

There are likely hundreds more, according to the Dixonville-Lincoln Memorial website.

Lincoln School was an elementary school that served African-American children. It was later turned into a vocational school but has long since been vacant.

Phase 1 of the project is to construct a “memorial walk” along Old Concord Road in the cemetery that will include a granite walkway and new landscaping.

So far, according to task force city liaison Alyssa Nelson, $251,890 has been raised for Phase 1.

“Knowing they were to the point where we could break ground, we wanted to pick up the momentum,” Perry said.

That is why Perry tasked Wright and Wright’s co-chair, Raemi Evans, to come up with a fundraiser.

“And that’s what I did,” Wright said.

The show was ticketed at $10 per person.

About 10 ministers — and one “apostle,” Miriam Keller from Outreach Christian Ministries International — volunteered to do stand-up comedy or skits.

“And this entire process has been very, very funny to me,” said Pastor Timothy Bates from the stage. “It started with Ms. Deedee Wright calling me and saying, ‘Minister Bates, I just want you to say yes.’ And I said, ‘Say yes to what?’”

Bates went on to say that he talked to Perry as well.

Jokes from the clergy ranged from Christian themes to family issues to comical misunderstandings.

“Always remember, preachers, always have you some Tic-Tacs or some peppermints or some Dentyne in your hand before you go to pray for folks,” said the Rev. Patrick Jones of New Zion Missionary Baptist Church.

Perry said the light-hearted nature of the fundraiser reminded her of her childhood growing up in the Dixonville neighborhood.

“Hopefully this will get people to think about Dixonville and the community and what it meant. Because this is what I grew up with. That kind of coming-together environment where people just loved each other and loved having fun,” Perry said. “So this reminded me so much of coming back home.”

Perry and Wright thanked both the individual and institutional sponsors who made the show possible.

Perry said they are already planning a similar event next year.

‘Pumped and ready to go’: City staff excited about…