Illini rely on student who geeks out on analytics 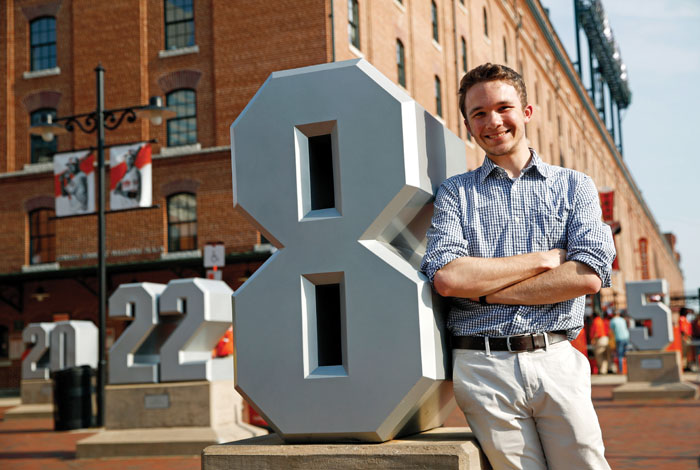 In this May 15, 2018 photo, Charlie Young, an intern in the Baltimore Orioles' analytics department, poses for a photograph outside Oriole Park at Camden Yards in Baltimore. As a self-described baseball geek and a student at the University of Illinois, Young was at the right place at the right time when the Illini became one of the increasing number of college teams to delve into analytics. (AP Photo/Patrick Semansky)

Charlie Young, a student at the University of Illinois and a self-described baseball geek, was at the right place at the right time when the Illini became one of the increasing number of college teams to delve into analytics.

When coaches want to know about a pitcher’s velocity or spin of the ball out of his hand or a hitter’s exit velocity and launch angle off the bat, Young is their man.

He grew up near Chicago, in Naperville, and his interest in analytics piqued after the Cubs won the World Series in 2016. He read “Moneyball,” the 2004 Michael Lewis book that introduced analytics to the masses. He poked around in the Lahman Baseball Database, which holds every major league box score since 1871. He started working with Alan Nathan, an Illinois emeritus professor who researches baseball physics and consults major league teams.

“It got me thinking, ‘I like statistics, I’ve always liked baseball, so maybe I can make this my work,’” Young said. “It started as a hobby. I read a few books. I got more and more invested because I thought it could be an actual career path I hadn’t thought of before.”

Assistant coach Adam Christ was put in charge of getting Illinois’ analytics program up and running last summer. Once Christ chose the equipment that would provide copious amounts of data on pitchers and hitters, he needed someone to run it and interpret the information.

“He’s passionate about what he does,” Christ said. “Basically this is kind of year one, so we’re trying to figure out everything he gives us and how to use it. He really enjoys diving into the numbers and likes to do whatever he can to help us.”

Young worked last summer in the Cincinnati Reds’ analytics department, and this week he started a similar job with the Baltimore Orioles. The Illini are still playing, and Young continues to generate reports for them from the East Coast.

Young recently finished his sophomore year as a double major in computer science and astronomy, and he carries a 3.78 cumulative grade-point average — very respectable for someone who spent up to 20 hours a week on the Illini’s analytics on top of carrying a full load of classes. His only pay was two hours of independent study credit from Nathan.

The players have embraced him, and a few started calling him “Analytics” instead of “Charlie.”

“He kind of likes that,” outfielder Jack Yalowitz said. “We all love having him around.”

The Illini go into the final weekend of the regular season 29-17 overall and 13-8 and tied for fourth in the Big Ten. That’s a big improvement over last year, when they finished 10th and missed the conference tournament.

Analytics in college baseball has ramped up in recent years as more programs have purchased three-dimensional radar equipment capable of generating multitudes of data.

Illinois paid about $15,000 to get started with FlightScope, a 3D radar that provides information similar to that of the more popular and more expensive TrackMan. FlightScope is portable, so it can be used at the stadium as well as at outdoor and indoor practice fields. TrackMan, on the other hand, is permanently affixed in stadiums.

According to Baseball America, 37 of the 297 Division I teams have TrackMan. In the Southeastern Conference, the top RPI league, nine of the 14 schools are using TrackMan and a 10th plans to install it next year, SEC spokesman Herb Vincent said.

Unlike the major leagues, where analytical data on every team is accessible and used for scouting, college programs use the information mostly to improve themselves, though Trackman does have a sharing program and there are advance scouting services available.

At Illinois, Young would set up FlightScope at fall practices and a couple times a week in the winter when players scrimmaged. He always had FlightScope up and running at practices and home games this spring, taking the information that streamed into his Microsoft Surface laptop to build reports.

How do the Illini use the information Young provides?

Young said a coach might ask him for the spin axis of a struggling pitcher’s slider. Spin axis is the direction a ball is spinning and reported in degrees of tilt.

Relief pitcher Ryan Thompson said Young helps him by pulling up a spread sheet that displays batting averages against him by right-handed and left-handed hitters and broken down further by type and location of his pitches. Thompson and his catchers are trusted to call most of their own pitches, and Thompson said Young’s information helps him with pitch sequencing.

Christ, the hitting coach, said he likes to look at a batter’s exit velocity in each of the four quadrants of the strike zone to see which pitches he handles well and not so well. The higher the exit velocity, the more likely it’ll be a hit.

Young reports launch angles, and batters can use that information to adjust their swing paths. Ground balls result from launch angles of less than 10 degrees, line drives from angles 10-25 degrees and fly balls from 25-50 degrees. A coach can tell visually if a swing is off, but the numbers back him up.

“It definitely gives proof to the pudding,” Yalowitz said. “Baseball is a game of feel, but it’s also cool to see the numbers so you know exactly what you’re doing.”

Leishman shoots 61 in debut of new course at…