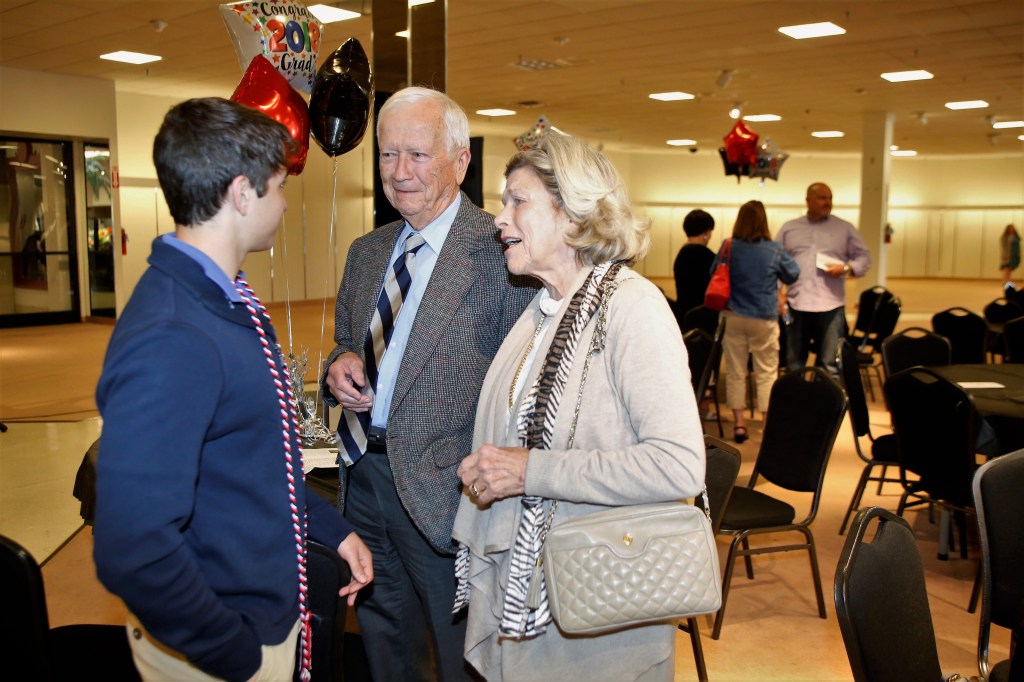 The class of 2018 has provided the community more than 8,800 hours of volunteer service and participated in 1019 hours of academy workshops. As Crosby seniors, they received one-on-one college advice and assistance with the college application process.

The students — 33 percent of whom will be first in their families to go to college — will attend college as far away as Seton Hall and Vanderbilt and as close by as Rowan-Cabarrus Community College.

Rowan-Cabarrus, for the third year, is the top choice for Crosby Scholars seniors. Appalachian State University and the University of North Carolina at Charlotte round out the top three.

A highlight of the afternoon was keynote speaker Phil Kirk’s message to the seniors. Kirk, a native of Salisbury, told stories about his time as chairman of the State Board of Education. After the speech, the Crosby Scholars were invited to walk across the stage as their names and college choices were announced.

Each scholar received an honor cord from a Crosby Scholar director that will be worn at graduation.

The afternoon culminated with the announcement of this year’s top scholars and scholarship recipients. The Crosby Scholars Class of 2018 has an average weighted GPA of 4.23 and 60 seniors are graduating with a weighted grade point of 4.5 or higher.

Through the generosity of community partners, Crosby Scholars awarded $34,500 in scholarships this year. In addition, Kathy McDuffie Sanborn presented six $500 scholarships for a student who has overcome hardship at each of the traditional high schools in memory of J. Michael McDuffie.

Steve Fisher, chairman of F&M Bank, awarded the annual scholarships given in honor of his parents, Paul and Sue Fisher. Elia Gegorek awarded a new scholarship in honor of her parents’ background and devotion to education. The Goodwill Willpower and Joyce Kohfeldt Determination scholarships were awarded to students who have overcome adversity. The Mona Lovett Executive Director and Aspire awards went to students who have been most active as Crosby Scholars.

Boots Carter spoke of the impact the late John Carter had on many lives as she presented the John A. Carter Memorial scholarship. Meg Dees shared the story of classmate and friend John O. Reynolds, in whose memory an annual scholarship is now awarded.

With her retirement looming, the board of directors surprised Executive Director Jennifer Canipe with a one-time Access Scholarship in her honor.

The 2018 Crosby Scholars scholarship recipients are:

The ceremony concluded with remarks by Canipe thanking the seniors for their involvement in Crosby Scholars and wishing them the best as they graduate and pursue college.

The Crosby Scholars program, celebrating five years in Rowan County, has enrolled more than 5,000 students and will open enrollment for the 2018-19 school year on Aug. 15. All sixth- through 10th-grade Rowan-Salisbury students are eligible to apply for the free program.

‘Pumped and ready to go’: City staff excited about…