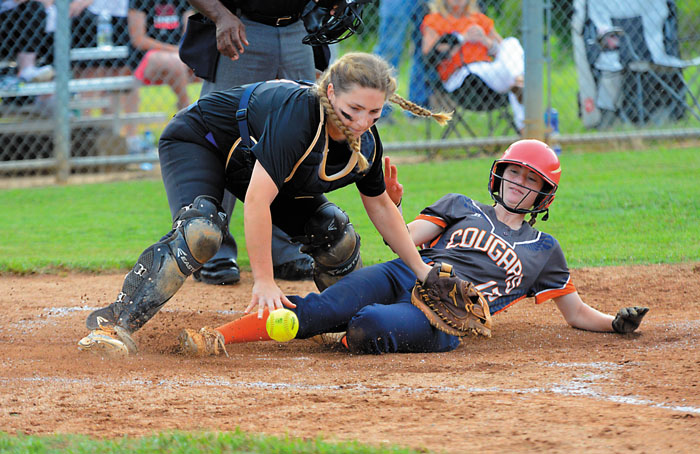 CHINA GROVE —  Carson’s latest softball victory was as easy as 1-2-3.

The defining moment  of Thursday’s 8-3 3A fourth-round playoff victory was the 1-2-3 double play — pitcher-to-catcher-to-first baseman —  the Cougars turned in the fifth inning when Marvin Ridge had the bases loaded and Carson was clinging to a 5-3 lead. That deflating play took the fizz out of the visitors and it propelled Carson into a best-of-three 3A West Regional championship series.

Carson (20-6) is the first Rowan softball team to win 20 times since East Rowan went 25-4 in 2011. The Cougars also are the first Rowan softball team to advance to the Final Four since that East team led by Chelsea White and Ericka Nesbitt made it in both 2010 and 2011. Back when East made its great runs, the Final Four employed a single-site, double-elimination tournament format. Now it’s like baseball. Teams play a best-of-three series to decide regional champions on May 22-26. Then those champions meet in a best-of-three series on June 1-2 at N.C. State to determine a state champion.

Carson kept moving forward with its 11th straight victory. Freshmen Kary Hales and Liza Simmerson drove in five of the runs. Katelyn McGee had hits that got two big innings started. Rylie Stewart (16-6) had some struggles in the circle, but her teammates picked her up with their bats and gloves.

“It’s been the Rylie Show a lot lately, but this was a night when the umpire had a tight strike zone, a hitter’s strike zone,” Carson coach Charissa Duncan said. “Rylie was getting a little frustrated with herself, but the key thing for her was to not walk people.  She had to put it in there and trust her teammates to play defense behind her, and when she started doing that, she was fine.  Rylie wasn’t at her best, but she doesn’t have to pitch a shutout for us to win. We can win games a lot of different ways with a lot of different girls coming through.”

Hales comes through often. She got it started for the Cougars, following Katie Jewell’s two-out hit in the bottom of the first with a two-run homer to left.

“I knew it was going deep, but I didn’t know it was going out,” Hales said. “That was good. It really helps us to score first. When we score first, we relax. Everyone can breathe a little bit.”

But it didn’t take Carson long to get behind. The Mavericks (22-5) bunched three hits in the top of the second, including a two-out, two-strike, two-run single to left by leadoff batter Ally Bigham for a 3-2 lead.

When the Marvin Ridge third started with a bullet for a base hit by pitcher Gabby Baylog, Stewart appeared to be in trouble, but Carson catcher Skyler Smith was up to the challenge on a steal attempt for a big first out. That throw by Smith led to a quick top of the third and proved to be a momentum-changer.

“The baserunner just had that look,” Smith said. “I knew she’d be taking off. That play did change momentum some. We got them out and we came in and got some runs.”

McGee and Jewell rapped singles to start the Carson third. Then Hales came through again, banging a hard groundball between the shortstop and the second-base bag. McGee raced home for a 3-all tie. After a sacrifice by Simmerson, Stewart bounced right back to the circle, but Jewell was running from third, and she had enough speed to slide home safely for a 4-3 lead. When Kaitlyn Honeycutt poked a soft RBI single, the Cougars led 5-3.

It was still 5-3 Carson, heading to the pivotal top of the fifth. Marvin Ridge quickly loaded the bases with none out on a walk, perfect slap bunt and line-drive single.

Stewart battled cleanup hitter Jessica Davis, who has launched eight homers, and got a huge strikeout on a pitch that tailed away, well out of the strike zone.

Madeliene Walker was next, and she smacked a bouncer right back to Stewart.

“I know a lot of those Marvin Ridge girls, I knew they were a good-hitting team, and I knew this was going to be a hard game,” Stewart said. “That was a tough spot  with the bases loaded in fifth inning, but I trusted my defense. And then things just fell our way.”
Stewart calmly took her time after fielding Walker’s grounder.  She got her balance, made an accurate throw home. Smith was standing on the plate, ready to do her part and fired a strike to first baseman Simmerson to complete the biggest defensive play in Carson softball history.

“I had time to look at the runners,” Smith said. “I knew we could get the double play, and I went for it.”

The Carson girls were so fired up after that play that they all could’ve dunked a basketball. Even center fielder Maci Cooper, who is 4-foot-11.

“We did get a little pumped up,” Duncan said. “Our defense was really good. I feel blessed that we’ve got so many good ballplayers.”

Carson added another run in the fifth when Haley Howerton knocked one off the wall in right-center after two defensive mistakes by the Mavericks. Howerton didn’t miss a homer by much.

Then Carson made it 8-3 in the sixth when Simmerson pulled a two-run single through the right side.

Stewart got the final out on her 99th pitch. It was a flyball to shallow center field. Cooper jogged in and squeezed it.

Stewart looked tired, but she’d shown a lot of determination. She struck out three, walked three and survived nine hits.

“Just a very small strike zone, and we had to adjust to it and work with it,” Smith said. “But Rylie still did what she needed to do and we won.”

Smith was good. So were those seven people behind Stewart. Hales and Jewell, the middle infielders, had marvelous defensive games. Carson didn’t make an error.

“I’m just really proud of this team,” senior third baseman Jessica Freeze said. “We’re doing what no one expected and we’re going where Carson has never been. But we still like to think of ourselves as underdogs, with nothing to lose and everything to gain.”