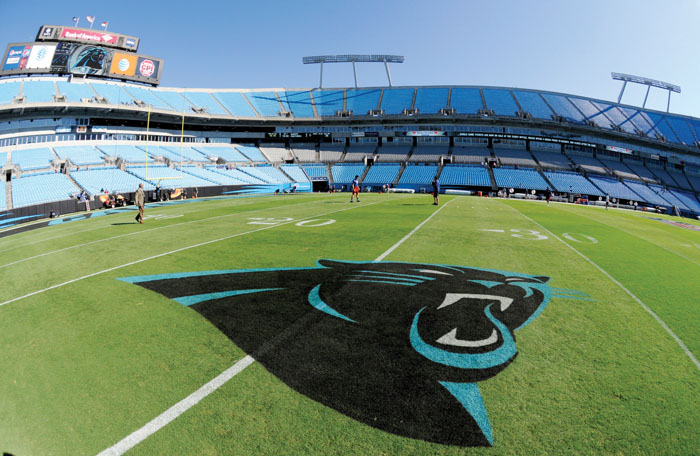 FILE - In this Sept. 22, 2013, file photo, a Carolina Panthers logo is displayed on the field at Bank of America Stadium prior to an NFL football game between the Carolina Panthers and the New York Giants in Charlotte, N.C. People familiar with the situation say hedge fund manager David Tepper has agreed to buy the Panthers from team founder Jerry Richardson for a record $2.2 billion. The people spoke to The Associated Press on Tuesday, May 15, 2018, on condition of anonymity because the team has not yet announced the sale. The purchase is subject to a vote at the NFL owners meeting next week in Atlanta. (AP Photo/Mike McCarn, File)

CHARLOTTE (AP) — The Carolina Panthers are off the market.

The Panthers announced Wednesday they have signed a “definitive agreement” to sell the team to David Tepper, the founder and president of global hedge fund Appaloosa Management.

The deal is subject to NFL approval.

League owners will meet next week in Atlanta, where they are expected to vote on the purchase. Since Tepper already has been vetted by the league as a minority owner of the Pittsburgh Steelers, the approval process is not expected to run into any snags.

The transaction is expected to close in July, the team announced.

Tepper, who has been a minority owner of the Steelers since 2009, said Wednesday in a release that he’s thrilled to become the next owner of the Panthers.

“I have learned a great deal about the community and the team over the past several months and look forward to becoming part of the Carolinas,” said Tepper, who was born and raised in Pittsburgh. “I want to thank Jerry Richardson and the other Panthers partners for all they have done to establish and develop the NFL in the Carolinas. It has been a remarkable 25-year journey and I promise to build upon the Panthers’ success on the field and in the community.”

Tepper has a net worth of more than $11 billion, according to Forbes.

He is paying an NFL-record $2.2 billion to purchase the team, according to two people familiar with the situation. The people spoke to The Associated Press on Tuesday on condition of anonymity because the team didn’t release the selling price of the franchise.

The release didn’t mention if Tepper plans to move the team or keep it in Charlotte.

Jerry Richardson, the team’s founder and only owner, abruptly announced he was selling the team last December after coming under investigation from the league for sexual and racial misconduct in the workplace.

That investigation is ongoing.

Richardson, who rarely comments to the media, said in the release that bringing the expansion Panthers and the NFL to the Carolinas in 1993 was enormously fulfilling for him, his wife, Rosalind, and all of the team’s partners.

“We are deeply grateful for the outpouring of support over the last 25 years,” Richardson said. “You have taken the Panthers into your hearts and made them part of this warm and supportive community.”

Richardson has had a strong relationship with the Rooney family in Pittsburgh through the years and is familiar with Tepper.

“I look forward to turning the stewardship of the Panthers over to David Tepper,” Richardson said. “I have enjoyed getting to know him in this process and am confident that he will provide the organization with great leadership in both its football and community initiatives. I wish David and his family the very best as they enter this exciting new phase of their lives.”

Tepper will have full ownership of the team. He’ll need to sell his ownership stake in the Steelers once he becomes the Panthers owner.

Richardson had owned 48 percent of the franchise and the Panthers had several minority owners under the previous regime.

Tepper is expected to be more outspoken that the relatively recluse Richardson, who hasn’t granted an interview with the media in more than a decade.

Tepper once criticized President Donald Trump before the election, calling him “demented, narcissistic and a scumbag.”

A noted philanthropist, Tepper told CNBC’s Squawk Box the day before the presidential election that Trump “masquerades as an angel of light, but he is the father of lies.”

Tepper disputed Melania Trump’s claim that her husband was a generous, giving person in a campaign appearance. He contended Trump did not give money in the wake of some New York-area disasters.

“During Sandy, the big Sandy benefit, the big 9/11 benefit, not one dime. Not one dime! You can’t tell me this is a charitable, generous person,” Tepper said on Squawk Box in November 2016.

Tepper went on to say, “One thing I do with my wife, this is a thing called the Golden Rule. It has nothing to do with investments_nothing to do with investments. It says do unto others as you would have others do unto you. And that’s not being done with Trump — not at least on the good side. It just was a turning point. That’s my upbringing. I can’t help it. I can’t take it anymore. And when you lie about that stuff and you lie about fundamental beliefs.”