Justify draws No. 7 post, is heavy favorite at Preakness 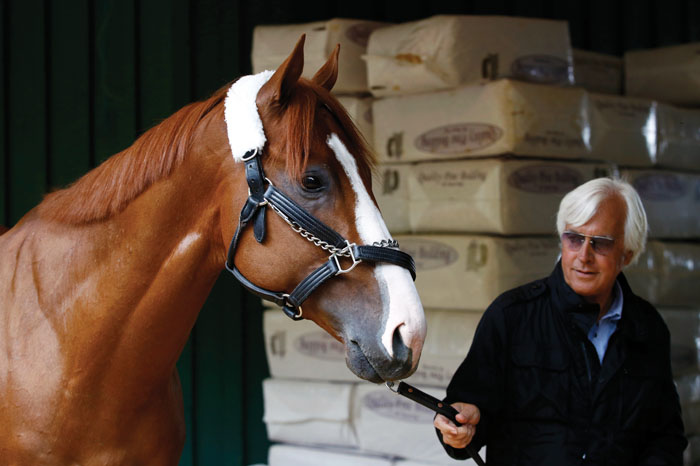 BALTIMORE (AP) — Having the Preakness favorite has never bothered Bob Baffert before and it doesn’t bother him with Justify.

Coming off an impressive victory in the Kentucky Derby , Justify is the 1-2 morning-line favorite for Saturday’s second race in a field of eight horses. Derby runner-up Good Magic is the second choice at 3-1, but Justify is the horse to beat with the chance to give Baffert his seventh Preakness winner and a shot at a second Triple Crown in four years after American Pharoah did it in 2015.

Baffert is 4-0 in the Preakness with the Derby winner and doesn’t see any reason Justify doesn’t have another big run in him.

“I like being the favorite,” Baffert said Wednesday. “I don’t want to be 50-1. I like knowing that I have a chance to win. When you come in and you’re like, ‘Well, I don’t know, we’re going to need the Stanford marching band to interfere a little bit,’ then you don’t feel that well. I just feel that when you know that there’s a chance you can pull this off and when you can win on the big arena, that’s what it’s all about.”

Justify already won on horse racing’s biggest stage when he held off a hard-charging Good Magic to capture the Derby on a muddy track at Churchill Downs. Rain is expected at Pimlico Race Course in the days leading up to the Preakness and on race day, which could set up a similar scenario to how jockey Mike Smith took Justify out to the lead before the final turn and pulled away.

“I think it’s less pressure for us because the Kentucky Derby, for me, it was so special,” Baffert said. “Coming in here I feel the same as I did when I won it with the other ones.”

Baffert won the Derby and Preakness with Silver Charm in 1997, Real Quiet in 1998, War Emblem in 2002 and American Pharoah three years ago.

Justify will face three other challengers from the Derby — Good Magic, Lone Sailor and Bravazo — and four horses who skipped it to point to the Preakness — Quip, Tenfold, Sporting Chance and Diamond King.

If Justify runs his best race, the rest of the field could be running for second place.

Quip is the new shooter best positioned to give Justify a run after winning the Tampa Bay Derby. Elliott Walden of WinStar Farm, which co-owns Justify and Quip, showed his allegiance at the draw by wearing a “Justify” hat and hopes the favorite wins for obvious reasons.

“It would point him toward the Triple Crown,” Walden said. “But if for some reason he stubs his toe, we feel real good about Quip’s chances to be the horse to upset him, if that happens.”

The odds are against that, unless a bruised heel Justify was treated for acts up after training on an off track at Pimlico. He arrived Wednesday about 90 minutes before the post-position draw, and Baffert expects to take him on the track for the first time Thursday morning to see how he’ll handle it.