Helio gets up to speed by pacing Indy 500 practice 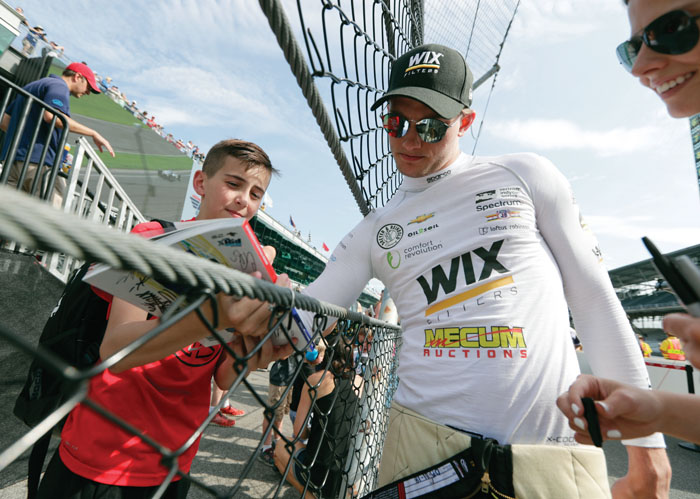 Sage Karam signs an autograph on as he walks to his car during practice for the IndyCar Indianapolis 500 auto race at Indianapolis Motor Speedway in Indianapolis, Tuesday, May 15, 2018. (AP Photo/Michael Conroy)

It was a big boost of confidence for Castroneves, who wasted no time getting up to speed at his favorite race track. The three-time Indianapolis 500 winner was fastest in Tuesday afternoon’s opening practice session, while Pagenaud led the morning session.

Pagenaud went 225.787 mph in the morning to earn fastest driver of the day. Castroneves went 224.665 for fastest in the afternoon. The Brazilian was moved by team owner Roger Penske to sports cars this season, but returned to IndyCar last week for the road course race at Indy to prepare for a run at a record-tying fourth 500 victory later this month.

“It’s Helio. We call him the Speed King,” Pagenaud said. “This is what he lives for. He loves Indy and he’s very, very focused on getting his fourth win. He’s very ready, like a fish in the water.

Danica Patrick, preparing for the final race of her career, was 18th on the afternoon speed chart at 222.728 mph.

“Today went really well. We accomplished what we wanted to,” she said. “A really solid day.”

Unlike her test session two weeks ago when she struggled with the weight of the steering wheel, Patrick’s biggest issue Tuesday was remembering how to work in traffic. She left IndyCar after the 2011 season finale and spent the last six years in NASCAR.

“I am still not completely confident in traffic. The team, they’ve been encouraging me to use my tools,” she said. “I’m like, ‘I need to feel the traffic first, before we create another variable.’”

It was a busy first day of practice for the May 27 race as Dale Coyne Racing waited until an hour before cars hit the track to announce that Zachary Claman De Melo would be the replacement driver for injured teammate Pietro Fittipaldi. The Canadian made his IndyCar oval debut at the speedway in the rookie orientation program, and his speed of 220.852 led that class.

Fittipaldi was scheduled to make his Indianapolis 500 debut but suffered serious injuries in a May 4 crash at Spa-Francorchamps in Belgium. Fittipaldi is back in Indianapolis rehabilitating, but will be out at least eight weeks.

So Coyne had to find another driver and used Claman De Melo in last week’s road course race at Indy, where the driver finished 12th on Saturday. He then had to wait three more days before Coyne gave him the Indy 500 nod.

“It’s an iconic venue and I’m extremely fortunate to be able to have the opportunity to drive here,” Claman De Melo said. “It’s unfortunate that it’s under these circumstances with Pietro’s injuries, so I realize how lucky I am to have this chance.”

As he was getting ready, Patrick was navigating a throng of autograph collectors stationed firmly outside his garage stall.

Patrick was a featured speaker later Tuesday at the “Fuel the Female” round table event.

in the Gasoline Alley, where she spoke to area high school students about succeeding as a woman in a male-dominated sport. She touched on the road she followed into racing — leaving high school to move to Europe and pursue a career as a driver — and the determination it took for her to succeed.

“I would say I never had people tell me I couldn’t do this verbally. But I don’t doubt that there were many people who thought I couldn’t do this in their mind,” she told the group of female students. “You can feel that. You can feel when people don’t believe in you. And to be honest, there were times I didn’t think so, either. That’s the reality of it and we’re all human, and there were times when I lacked confidence and doubted myself.

“But you have to find ways to cope with that and gain empowerment and confidence and know what you want and be absolutely determined to get there.”

The rest of Tuesday’s opening day went to Ed Carpenter, owner of Patrick’s car, who was third fastest as Chevrolet drivers took the top three spots. Jay Howard was fourth fastest and was followed by Scott Dixon and Marco Andretti in a trio of Hondas.

Sage Karam made his season debut and was seventh fastest.

Will Power, winner of the road course race on Saturday, was 19th out of the 35 drivers who turned laps.