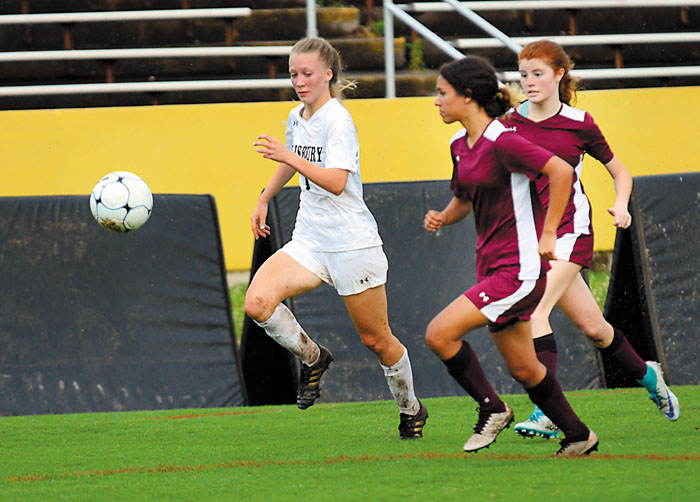 SALISBURY — No matter how you sliced it, this one was worth the wait.

Salisbury’s unblemished girls soccer team endured a two-and-a-half hour weather delay Wednesday night at Ludwig Stadium, then scored twice in the final 19 minutes to beat C.D. Owen, 2-0, in the third round of the 2A state playoffs.

“It was a really long wait,” freshman Caroline Cardelle said, after the top-seeded Hornets (24-0) reached Round 4 for the first time in school history. “I think that time actually helped us, brought us closer together as a team. When we got back on the field, we were so ready to bring it home.”

Cardelle and junior Freya Obermueller scored goals for Salisbury, teammate Bethanie Stauffer swept one off the doorstep in the waning moments and Owen goalkeeper C.J. Graham prevented several with acrobatic saves. It was a pulsating-yet-rugged match that pushed Salisbury into Saturday’s home game against Forbush.

“I still thought we were lethargic in the first half,” said winning coach Matt Parrish. “Every button that we tried to push — from the first break to the second break to all through that huge third break, was spent trying to make them understand we are undefeated for a reason. And that although (Owen) is a very good team with a very good record, we could beat them.”

That changed in the second half, when Salisbury logged on and peppered the Owen defense with 12 shots.

“It was a rough first half,” said midfielder Piper Muire. “But that second half came from what was in our hearts, our fight and how much we wanted to win the game.”

Owen (16-4-1) — a Black Mountain squad that posted 12 shutouts and allowed only 14 goals this season — had its five-match winning streak snapped, ending a long day of single-elimination drama.

“That was a big part of it, having to wait around so much,” said losing coach David Fiest. “But both teams had that. It would have been better to have the game decided in the flow as opposed to on a set piece. In the grand scheme of things, it’s still an earned victory.”

The match was scoreless until midway through the second half, when Obermueller was taken down in the box by Owen defender Savannah Johnson. With Julia Honeycutt sidelined with an ongoing illness, Cardelle was summoned to attempt a penalty kick.

“My first reaction was, ‘Ut-Oh,'” she said with a post-game smile. “I was very scared. But I just relaxed, remembered to breathe and shot it where I always do.”

Cardelle’s PK with 18:31 remaining skipped past Graham and put the Hornets ahead. Muire said “it felt so odd after that,” and added, “It’s hard to protect the goal for 18 minutes.”

Obermueller agreed. “It was the longest 18 minutes of my life,” she said.

“We’ve talked to E-Mann about that several times,” Parrish said. “She puts a lot of pressure on herself if the ball’s above her shoulders, to push it over the crossbar. Sometimes we just want her to not let it go in the goal and allow our defense, which is pretty stout, to do some work.”

That defense worked enough to limit Owen to four shots and just three corner kicks. Mann made three legitimate saves to record the team’s 15th shutout. And Obermueller salted the game away when she converted a rebound — off Cardelle’s pop-up in front of the net — with 8:15 remaining. The speedy German exchange student spent much of the evening exploding toward the cage, only to be thwarted by Graham and the Owen defense.

“One of their girls (defender Brooklyn Roland) was really fast in the back,” Obermueller said. “I tried to get around her over and over again, to make chances. That’s what I was told to do.”

When it ended — and Salisbury had gone where no Rowan County girls team has ever gone — there were muddied uniforms, tired legs and exhausted expressions.

“We didn’t want to disappoint Parrish, the team and Julia Honeycutt,” Obermueller offered. “We wanted to give her another chance to play. For all of us, to be part of something so big is so happy. We’re not ready for it to end.”

NOTES: Honeycutt was sidelined with an undiagnosed ailment, but will seek clearance from a doctor on Friday. … Stauffer has decided to attend Vanderbilt University in Nashville this fall. … Fourth-seeded Forbush (23-2-1 with 7 straight wins) earned a 5-0 third-round win against Hibriten on Tuesday. Including a 0-0 tie with Ronald Reagan, the Falcons have posted 13 consecutive shutouts and haven’t yielded a goal since a 2-1 victory against West Stokes on April 4.