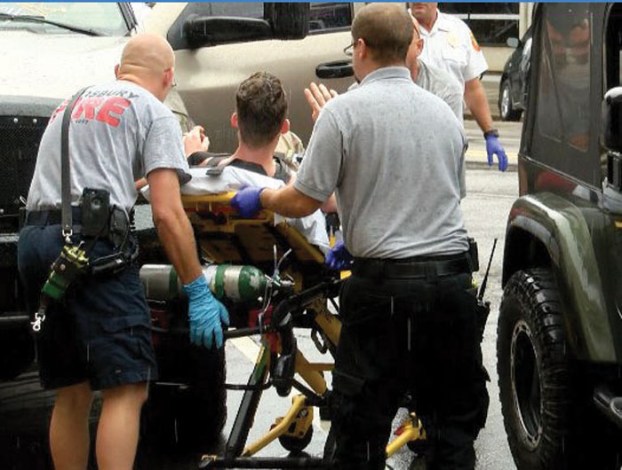 Fire, police and other emergency responders work to revive a couple believed to have overdosed and passed out in downtown Salisbury recently. A 5-year-old boy was in their pickup parked in front a downtown business. Photo courtesy of WBTV

Drug policies without compassion are doomed to fail

If you ask people what caused the opioid crisis ravaging our country, you’ll no doubt hear that doctors are to blame for handing out painkiller prescriptions too liberally. That narrative makes sense: Over the past few decades, doctors have massively increased the amount of opioid prescriptions going to patients. Most heroin users report that they started off abusing prescription drugs.

But this gets at a basic misconception of the crisis. The epidemic is not really about prescription practices — or at least it isn’t any longer. It’s about a lack of care for people who are dependent on the drugs. Unfortunately, policymakers are learning this the hard way.

In response to the surge in opioid overdoses, lawmakers across the country have clamped down on prescription practices. Today, every state and the District of Columbia have prescription drug monitoring programs, which allow law enforcement and sometimes doctors to prevent patients from “doctor shopping” from prescriber to prescriber to stock up on pills. In fact, the federal government has spent more than $100 million over the course of the past decade to help states develop these programs. Studies have shown that these programs have been successful in reducing doctor shopping, so they’re generally popular.

Problem solved, right? Well, no. Opioid prescriptions have fallen in recent years, but nonetheless overdoses continue to skyrocket. In fact, a new study published in the Annals of Internal Medicine — which reviewed 17 studies about the effectiveness of prescription drug monitoring programs —shows that there is no strong evidence that such programs have worked to reduce opioid deaths.

Worse, this review also found that the drug-monitoring programs might have a troubling unintended consequence: a substitution effect. The fewer prescription drugs that abusers can get their hands on, the more likely they are to turn to more dangerous drugs. Three studies included in the review found that heroin overdose deaths increased after drug-monitoring programs were implemented.

This news is bound to frustrate people. Prescription drug monitoring is one of the few policies that both the Obama and Trump administrations touted as a potential solution to the crisis. But despite all the work done so far, the programs have come up short.

That’s because prescriptions aren’t the problem. Sure, the epidemic might have had its roots in prescription painkillers. But the fact remains that the vast majority of people who use prescription opioids under medical supervision do not become addicted. The real danger is illicit opioids, such as heroin and fentanyl. We need to stop thinking about the crisis as solely a supply problem.

Prescription drug monitoring “doesn’t touch the demand side,” said David Fink, a doctoral candidate at Columbia University’s Mailman School of Public Health and lead author of the Annals of Internal Medicine study. “We really need a public health approach. We need to take care of the people who are dependent.”

This is the huge flaw with drug monitoring. Fink notes that people rarely ever talk about what doctors should do if they discover that one of their patients is doctor shopping. Too often, they simply drop such patients without redirecting them to resources that could help them. The emphasis is on where the drugs are coming from, not on the people seeking them.

The real reform we need is expanded treatment. Yes, the Justice Department should go after people who bring heroin and fentanyl into our country. And yes, lawmakers should sue drug manufacturers and pharmacies that have diverted painkillers into drug rings. But let’s be honest with ourselves: We’re never going to end the supply of illicit opioids — even if we pursue the death penalty for drug dealers, as the president wants.

Being tough on drugs means nothing if we’re not also compassionate to those who have fallen victim to drug markets. A great example to follow is Virginia, which has used its Medicaid program to expand access to addiction treatment. Recent studies show that the state has already seen a substantial decrease in emergency department visits related to opioid abuse.

Congress and other state legislatures should follow suit. Now is the time for government officials to prove that they actually care about the issue. It’s not just about drugs. It’s about millions of people who deserve the health care they need to avoid an increasingly certain death.

Robert Gebelhoff is an assistant editor for The Washington Post’s Opinions section.

Sam Quinones’ mother grew up on a farm, and years later when she wanted to call her children home for... read more