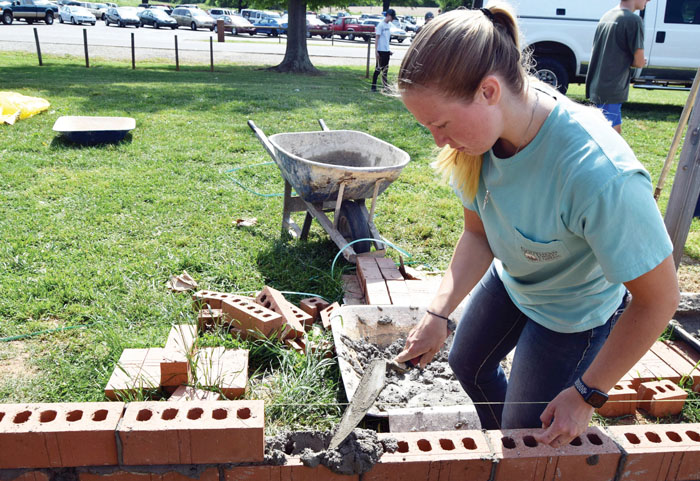 Ashton White works laying brick on an addition to West Rowan High School's softball field. Though she graduated in 2017, White still returns to the school to help out with younger masonry students. Rebecca Rider/Salisbury Post

Ashton White, 19, a 2017 graduate, recently nabbed first place in the State Masonry Competition’s postsecondary division. And she’s the first woman to do so.

The win qualified White to compete in the national competition in June.

Most days find White in the West Rowan masonry shop honing her work.

“I don’t know what I’m going to be doing at nationals, so I’m just practicing my skills,” she said.

This was White’s fourth year as a stonemason, and she said she was inspired to pursue masonry when she attended a local competition.

“I went to competition and saw all these guys and girls laying brick and I was like, ‘I want to do that.’”

White was drawn to the idea of being able to work with her hands and learning a skill.

“I get to look back on what I’ve built and be like, ‘Hey, I did this. I built this.’ It’s not something everyone can do,” she said.

And now she’s a trailblazer. White was the only woman in West Rowan’s masonry program while she was in high school. This year, several other female students have joined.

Not many women choose to take up masonry. White said she thinks many of them might feel intimidated or that they won’t belong in the field. But White said she always felt welcome in the masonry shop.

“The guys see me as one of the guys in here,” she said.

Though many might think of masonry as a “man’s field,” White disagrees. Masonry and other trades are occupations that reward those who work hard and have the passion for it.

“Even though it’s a male-dominated field, females can do whatever a man can do if they put their mind to it,” she said.

White said she hopes her win will inspire other female students to pursue masonry — whether it be as a pastime or as a career.

“Just go for it,” she said to other women thinking about a trade career. “You never know what might happen.”

White is a rising sophomore at Rowan-Cabarrus Community College. Once she gets her general classes out of the way, she plans to attend the University of North Carolina at Charlotte and study construction management.

Even though masonry is her future, White said she still gets nervous before competitions.

“My nerves were basically shot,” she said about the state competition.

So she popped in some chewing gum and tried to imagine a place that felt like home — the masonry shop at West Rowan.

“You just have to put yourself in the mindset of, you’re in the shop — it’s just another day in the shop,” she said.

White was the only woman competing in the three-hour postsecondary masonry competition, and her cool head paid off.

Other West Rowan students netted first-, second- and third-place wins. Instructor Rodney Harrington said he was pleased with the turnout.

“My students put a lot of work in, and they work extremely hard to achieve what they set out to achieve,” he said.

“It’s become the greatest thing I’ve ever done,” she said. “This is my passion.”