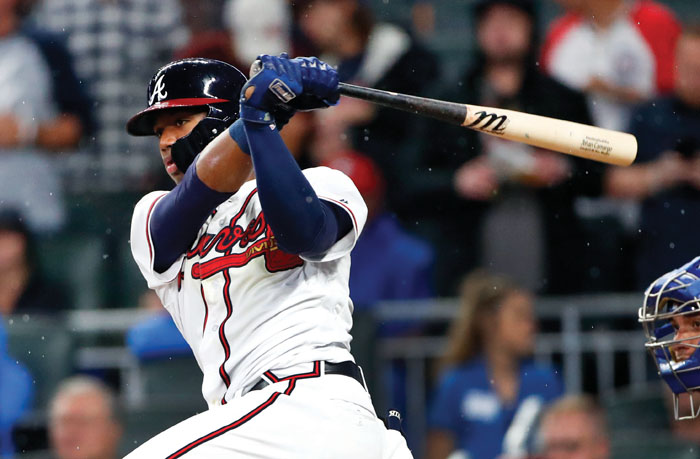 Atlanta Braves' Ronald Acuna Jr. drives in the go-ahead run with a base hit in the eighth inning of the team's baseball game against the Chicago Cubs on Wednesday, May 16, 2018, in Atlanta. The Braves won 4-1. (AP Photo/John Bazemore)

ATLANTA (AP) — Ronald Acuna Jr. drove in Ozzie Albies with the tiebreaking run in the eighth inning to send the Atlanta Braves past the Chicago Cubs 4-1 on Wednesday night.

Carl Edwards Jr. (2-1) allowed five straight baserunners in Atlanta’s three-run eighth, including a bases-loaded walk to Tyler Flowers, without getting an out. Justin Hancock also forced in a run with a walk to Johan Camargo.

The Braves’ big inning was set up by Albies’ triple to the wall in center field past Albert Almora Jr., who robbed Flowers of a probable home run earlier in the game.

Albies scored on Acuna’s second hit, a sharp single to left field off Edwards. Acuna moved to third on Freddie Freeman’s single against the shift to the opening on the left side of the infield. Freeman advanced to second on the play. Following an intentional walk to Nick Markakis, Edwards walked Flowers to force in a run.

Albies scored Atlanta’s first run after his leadoff double in the first.

A.J. Minter (2-0) stranded two runners in the eighth. Arodys Vizcaino, who blew a save opportunity in Tuesday night’s 3-2 loss to Chicago, pitched a perfect ninth for his eighth save in 10 chances.

The Cubs had one baserunner in each of the first four innings but did not score until pulling even at 1-all in the fifth. Ian Happ led off with a single and scored on Kris Bryant’s single. Bryant had three hits.

The Braves took a 1-0 lead in the first when Albies doubled off the center-field wall and scored on Freeman’s single.

After allowing a combined 14 earned runs on 23 hits in only eight innings in losses to the Giants and Marlins in his last two starts, Braves right-hander Brandon McCarthy gave up just one run and five hits in six innings.

Chicago’s Tyler Chatwood allowed one run and four hits in 5 1/3 innings. He appeared stunned when he was pulled after a single by Acuna. Brian Duensing walked Freeman before Markakis hit into his second inning-ending double play of the game.

Chatwood applauded on the mound after Almora reached over the center-field wall to rob Flowers in the second. Almora timed his leap perfectly to make the catch near the 400-foot mark. He then turned his back to the field to watch the replay on the video board before tipping his cap.

Cubs: Manager Joe Maddon said RF Jason Heyward (concussion) still has some protocol to clear but “had a good day” working with trainers on the field.

Braves: SS Dansby Swanson (left wrist inflammation) could soon be ready to play — either in a rehab stint or if he comes straight off the 10-day disabled list. Swanson worked out before the game for the second straight day and his status will be determined after his wrist is re-evaluated. He could come off the DL this weekend.

Braves: Rookie RHP Mike Soroka (1-1, 3.68) will make his fourth start overall and first against the Cubs. He has failed to last as long as five innings in his last two starts.