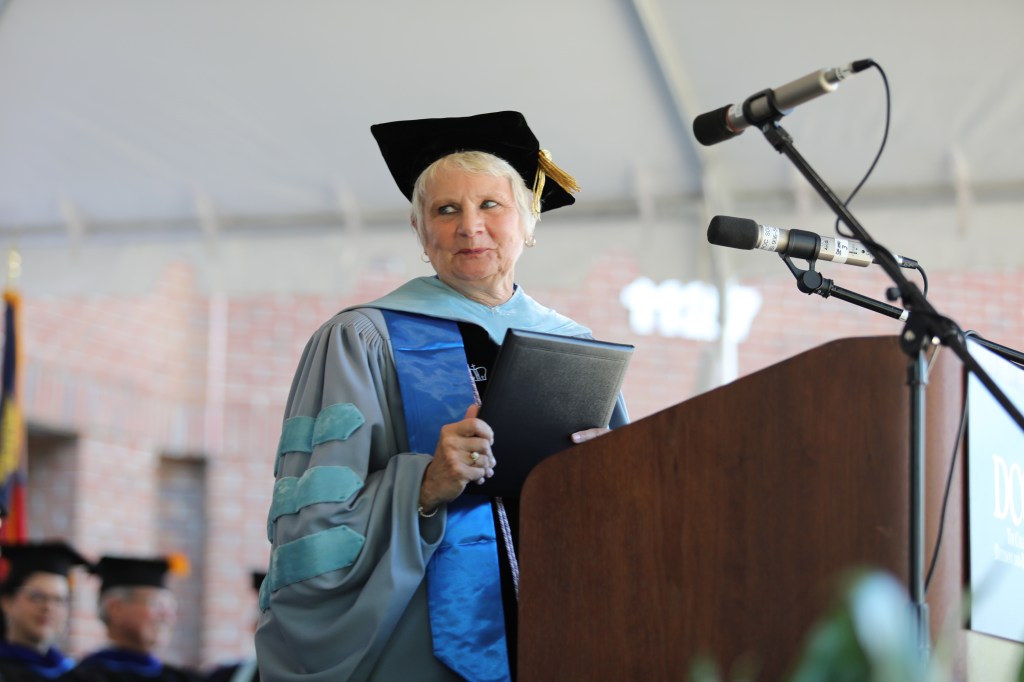 THOMASVILLE — The Davidson County Community College campus bustled with students, families, friends, faculty and staff in celebration of the Class of 2018 during the college’s 55th commencement on May 12.

A total of 1,068 students were eligible to participate. Together, they earned 1,563 credentials, including 610 associate degrees, 181 diplomas and 772 certificates.

The commencement marks the final one for college President Mary Rittling. After 15 years leading DCCC, Rittling will retire in December.

The college honored her with the presentation of an honorary associate of arts degree. Rittling is only the eighth person in the college’s history and the first president to receive an honorary degree.

Board of trustees Chairman Ken White presented Rittling with the degree.

“There is no one who has been more dedicated to making sure that you are here today than Mary Rittling,” said White. “She is first and foremost a champion for student success, for finding ways to build the programs and secure the resources that you need to be successful on campus and in your future careers.”

The day was filled with cheers and reflection as speakers offered words of encouragement and wisdom. Alumnus Kevan Chandler was the keynote speaker.

Chandler, a 2004 North Davidson High School graduate, attended Davidson County Community College from 2006 to 2007. He went on to earn his bachelor of arts degree in counseling from John Wesley University in 2010.

The youngest of three, he was the second in his family to be diagnosed with spinal muscular atrophy. Chandler recounted a trip to Europe with several friends who helped carry him throughout their adventures.

“If we use the things we’ve learned here, in and out of the classroom, not as a means of survival but instead a means of service, we will leave a worthy legacy for generations to come,” Chandler said.

Graduate Jennie Weschler not only made her family proud by earning an associate in arts degree and graduating with honors, but she is also continuing a legacy of women in her family achieving academic success.

“I have chosen to wear this cap and gown that has been passed down from generation to generation because I want to honor the tradition the women in my family have set before me,” said Weschler. “It symbolizes the success that my female family members have achieved. It feels nice to walk in the footsteps of the most empowering women in my life.”

Weschler plans to continue her education at Appalachian State University in Boone this fall.