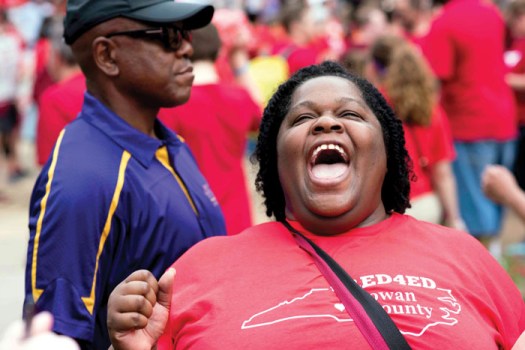 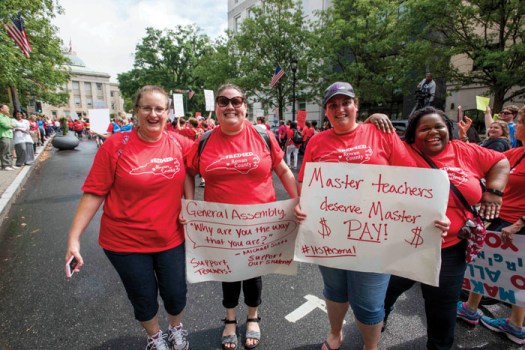 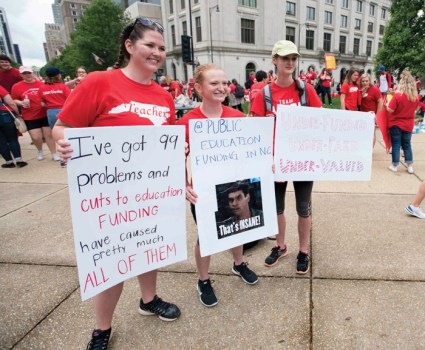 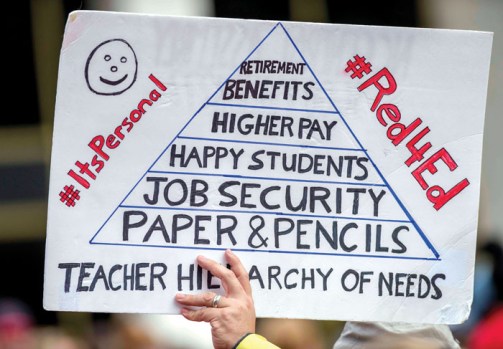 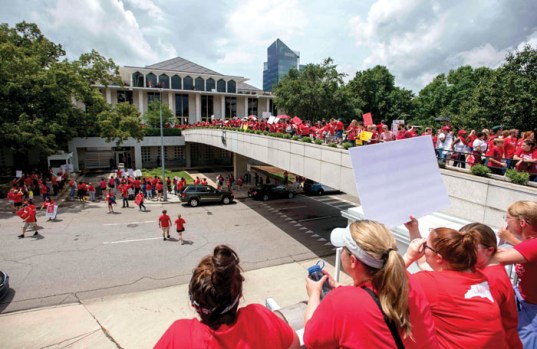 Teachers and public school supporters rallied in the state capital on Wednesday to make a stand in regards to state funding for education. Jon C. Lakey/Salisbury Post 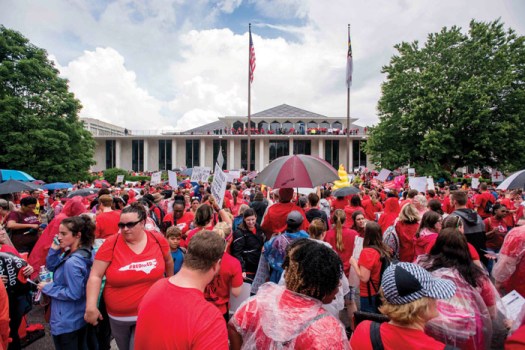 The marchers clog the streets and sidewalks around the General Assembly building. Jon C. Lakey/Salisbury Post 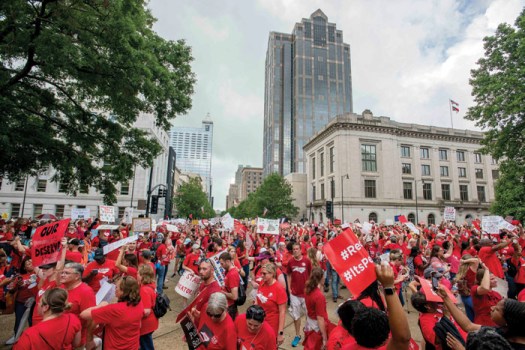 Teachers arrive at the State Capitol grounds after marching up Fayetteville Street in May. Jon C. Lakey/Salisbury Post 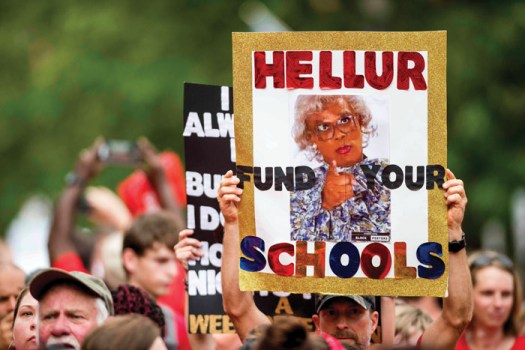 Teachers and public school supporters rallied in the state capital on in May 2018 to make a unified stand in regards to state funding for education. Jon C. Lakey/Salisbury Post 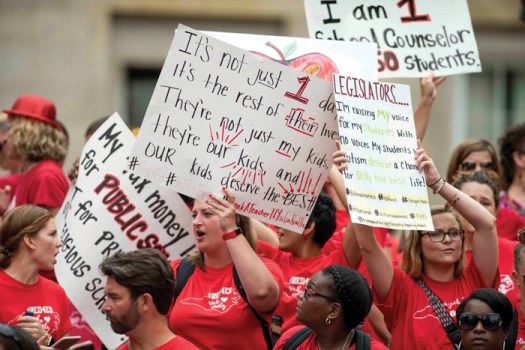 The marchers arrive at the State Capitol grounds after the march up Fayetteville Street. Jon C. Lakey/Salisbury Post 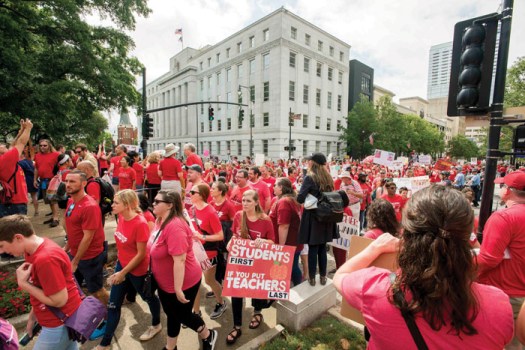 RALEIGH — For many Rowan County teachers, it was personal.

As an estimated 19,000 educators wearing red flocked to Raleigh on Wednesday morning to rally for better conditions in the classroom, Rowan-Salisbury teachers marched with thoughts of their students on their minds.

Freeman was one of dozens of local educators who joined teachers from across the state to march on the North Carolina General Assembly. While the exact number of local participants was not known, Rowan-Salisbury Schools said that 554 staff members asked for leave Wednesday.

The streets around the state Capitol and legislative building were flooded with a sea of red as teachers marched and carried homemade signs. The procession was threaded with music as some played drums, trumpet or trombone to set a quick marching beat. The marchers chanted “Red for Ed” and yelled, “This is what democracy looks like” as they walked.

Rowan County was one of more than 36 school districts across the state to cancel classes Wednesday — a fact that protesting teachers said they were grateful for.

The rally wasn’t specifically about teacher pay, teachers said. Angela Ramey of China Grove Elementary said she was upset at the lack of public understanding in the days leading up to the rally.

“It kind of shows they need to be educated,” Ramey said.

While teachers were asking for a pay increase, they also demanded an increase in per-pupil expenditures, a restoration of the Teaching Fellows program and other teaching scholarships, and funding for basic classroom supplies.

North Carolina teachers earn an average salary of about $50,000, ranking them 39th in the country last year, the National Education Association reported last month. But while pay has increased incrementally, it still represents a 9.4 percent slide in real income since 2009 because of inflation, the NEA said.

According to Ramey and others, teachers have higher expectations than anyone realizes.

“We have to be counselors to (students), we have to be teachers, parents,” said Alexis Greer, a teacher at North Rowan.

In addition to lesson plans, teaching and grading, teachers also take on extra duties, sometimes supervising school and sports events long into the evening. They stay late until every student has made his way home.

Some work two or three additional jobs to make ends meet and spend their summers in training or at conferences. And, Greer said, she doesn’t know a single teacher who doesn’t have a stockpile of food in their classroom for students who don’t have access to regular meals at home.

“People want it done, but they don’t want to pay to have it done,” Greer said of the expectations.

All those expectations and hours show in the classroom — but not always positively.

Many who marched had a specific bone to pick with legislators. Sydney Smith, a media center coordinator with Rowan-Salisbury Schools, said she wants to see more funding in hopes that RSS will roll back its staff optimization plan.

“It’s just been depressing,” Smith said. “… It’s sad that they’re having to choose between safety and resources. Our students deserve better.”

Anthony Johnson, a teacher at Isenberg Elementary and the 2017 Southwest Regional Teacher of the Year, said he was in Raleigh to promote an increase in funding for classroom supplies. While Rowan County teachers receive a small supply stipend from the Board of Commissioners — which teachers said they’re grateful for — it doesn’t cover all the need.

Johnson is often praised for his innovative classroom approach, allowing students to fly drones, practice coding on robots or create models using a 3D printer. Most of that, he said, comes from his own pocket. But it’s not just the fancy gadgets he and other teachers have to cover — it’s basic supplies like tissues, hand sanitizer, paper and pencils, he said.

“Ten to 15 percent of my check every month goes back into the classroom,” Johnson said. “… We have to buy our own supplies. It’s like policemen having to buy their own bullets.”

Ramey and other teachers from China Grove Elementary said that while they marched for increased funding, they also marched because they don’t want to see more budget cuts. Many students at China Grove receive free breakfast and lunch — a program that’s state-funded and that the teachers want to see continue.

But they also wouldn’t mind updated facilities and supplies. Kraft said most school reference materials are outdated by at least 10 years.

“I probably have three textbooks in my classroom,” Kraft said. “I mean, thank God for iPads, but think of the systems that don’t have them.”

North Carolina’s education funding has languished since the recession, but local lawmakers say they’re working to fix it. Gov. Roy Cooper spoke to the crowd during an afternoon rally and talked about funding improvements he has proposed for the 2018-19 school year.

The increases include an average 8 percent raise for teachers, expanding the Teaching Fellows program, increasing funding for Smart Start, adding more slots for pre-kindergarten classes, a $150 stipend for classroom supplies and funding the class-size mandate.

“Better pay is just one of the ways we can show our respect for you,” Cooper said at the rally. “But we must do more for our schools. We have to invest in textbooks and digital learning materials. We have to improve the physical condition of our schools. … And we have to treat teachers like the professionals you are.”

Educators also had the opportunity to speak to local lawmakers. Rep. Harry Warren met with North Rowan High School teachers Wednesday, and the group said he helped ease some of their concerns.

“They are starting dialogue now to bring back things like master’s pay, things like Teaching Fellows,” said Lydia Allen of North Rowan High.

“What we’re hoping is that that was, like, real talk and not politician talk,” Freeman added.

While there’s no way to be sure, and while they understand that fixing North Carolina’s education is a process, the group said that meeting with Warren meant they accomplished their goal.

“I think that was the main thing today, was to be heard. … And I felt like that happened,” Greer said.

For those who said educators should have been in school Wednesday teaching class, Rowan County teachers had a few choice words.

“If I don’t lead by example, what would I really be teaching them?” said Allen, a civics teacher.

“I think it shows the power of teachers,” Freeman said. “… We’re here because we want our voices to be heard.”

“This is just another way we go above and beyond,” Ramey said “… Today is an opportunity. It’s an opportunity to express our passion — that we are here for our kids.”