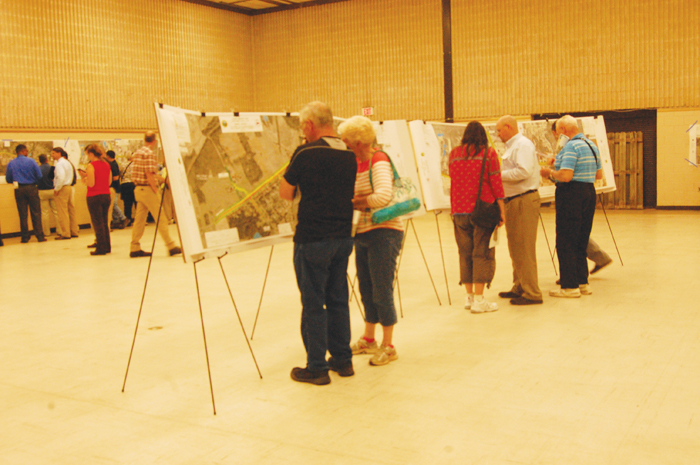 Residents gather Tuesday at the Salisbury Civic Center to look at maps of a potential widening to N.C. 150. NCDOT has proposed expanding portions to a four-lane, median divided road. Andie Foley/Salisbury Post

SALISBURY — The North Carolina Department of Transportation hosted a public meeting Tuesday on its plan to widen parts of N.C. 150 west of Salisbury.

The proposed project would expand the highway from a two-lane road to a four-lane, median-divided highway between Airport Road and Grants Creek, where the current widening of Jake Alexander Boulevard stops.

DOT plans to begin right-of-way acquisition for the expansion in 2025.

Construction could be as far away as 2027, said Brett Abernathy, the DOT division project development engineer.

But Abernathy said the department is being pushed to accelerate this and other projects, and the dates could change by January.

Tuesday’s meeting was held from 4 to 7 p.m. in the Salisbury Civic Center.

By 6 p.m., nearly 150 residents near the project site and people who use the road had come to view maps of the expansion plan. DOT representatives were on hand to answer questions and take comments, suggestions and concerns.

Linda Holshouser, who lives along the proposed expansion, said she agrees that the road is far too congested. But she wondered if two lanes would be enough to accommodate the growing traffic in light of new housing developments in the area.

She also worried about the medians, which will require some residents along the proposed road to do u-turns to travel to work or return home.

“That little lane is only going to hold three or four cars before somebody’s going to run in the back of you,” said Holshouser.

Others expressed concerns about maintenance of the medians, worrying that grass medians would grow unruly or collect litter.

“There’s a proposed grass median in front of my house, and the DOT only mows once or twice a year,” said Carol Comer, another resident along the road. “I want concrete painted green. We’ll make out like we have grass.”

Both Comer and Holshouser said they appreciated the meeting and the chance to learn more about the project. They also liked the large-scale maps available throughout the meeting space.

Abernathy said the purpose of the project is to decrease traffic accidents, which are common now because of residents making left turns into their properties.

He said he was happy with the meeting’s turnout and the dialogue with local residents.

“Obviously there’s opposition to a median when you start restricting people’s access in and out of their property, but I think most of the people that I’ve talked with realize that there’s such a traffic congestion problem now and the accidents are such that something needs to be done,” Abernathy said.

Total expenses for local PACs to be determined in…