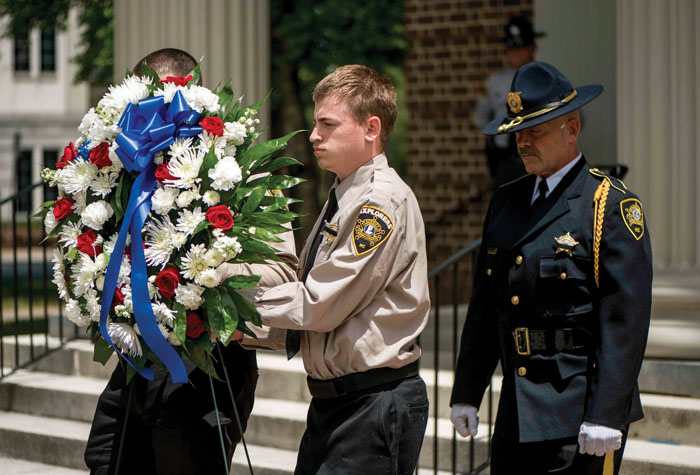 Rowan County Sheriff's Office Explorers Spencer Washam and Tyler Seamon retire the wreath to the courtyard after the service escorted by Lt. L.R. St. Clair at a memorial service at First Presbyterian Church to honor local officers that died in the line of duty. Jon C. Lakey/Salisbury Post

SALISBURY — On Tuesday, Robert “Bobby” Clement Jr. wore an Army National Guard uniform, but this time next year he just might be wearing a Rowan County Sheriff’s Office uniform.

He would follow in the footsteps of his father, Robert, who was injured during a 1997 standoff while serving a warrant.

The elder Clement died after multiple surgeries that were needed after the injuries received during the shooting. Clement, who was a member of the Spencer Police Department, is one of the officers whose name is remembered on a day when families across the state think fondly of those who died in the line of duty.

Clement attended the service with his mother, Lunda Eller, who is a deputy with the Rowan County Sheriff’s Office, and his stepfather, Eric Eller, a reserve deputy. His wife and two children were also there.

“When (my father) passed, he left behind a really big legacy, and that’s just something I wanted to follow in his footsteps and continue that legacy, and everything he stood for I wanted to carry on,” Clement said.

Clement said he grew up hearing stories about his dad and what kind of man and officer he was. He hopes to be able to make his father proud.

Sheriff Kevin Auten said he didn’t hesitate for a second to agree to sponsor Clement, whom he said has the same personality and compassion for people that his father had.

“He sees the good in people. He’s been around it his whole life,” Auten said.

The names of the officers who died over the previous year were read aloud during a roll call.

Some of the names added to this year’s roll call included Sgt. Otis Gallimore, a Salisbury police officer who died in March 1930. The department hopes to get his name listed on the wall of the National Law Enforcement Memorial in Washington next year. His name had been unknown to the department.

Police Chief Jerry Stokes said the service is about making sure that no one forgets the sacrifices these men and women made.

“We want to pay special homage to those who sacrificed their life to this profession, this very noble profession, and remember them,” Stokes said.