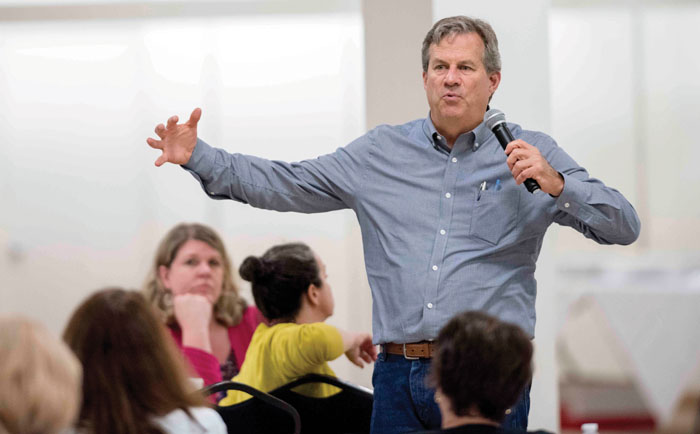 SALISBURY — In what he called the great domestic issue of our time, journalist and author Sam Quinones shared how the idea for his book “Dream Land” came about and insights about opioid abuse during a forum Tuesday in Salisbury.

The forum, the second of its kind in Rowan County, was held at West End Plaza. The six-hour forum featured panel discussions by experts and people who are in varying stages of sobriety as well as parents of heroin addicts whose children died from overdoses.

As the keynote speaker, Quinones said he found that while researching and writing his book, opioids — particularly heroin — is a subject many people don’t want to discuss.

He talked about the introduction of heroin in the United States in the 1970s and its resurgence in the 1980s. The heroin of the ’80s was cheaper and much more potent, he said.

Quinones said through his book, he made the correlation to the management of pain, the care prescribed by doctors and the pharmaceutical companies that were willing to sell pain medications as a segue into heroin.

“The thought was that we need something greater,” he said.

The change in culture was the belief that a pill would solve the problems that ailed people instead of looking at alternative sources of managing pain. Doctors spent less time with patients, he said, and instead, the quick course of treatment became to prescribe pills — and lots of them.

Soon pills were sold on the black market, and then the pharmaceutical sales reps changed their tactics. No longer were salesmen former pharmacists or doctors; they were replaced with a new sales model that that relied on marketing and sales people whose sole objective was to make a sale.

The author said those addicted to Oxycodone realized they could use heroin for about $40 a day and soon abandoned their $100-a-day habit.

Quinones said he believes one of the solutions to combat drugs is through community — partnerships, support and education. But he added there is no one easy answer.

It takes looking at what could work, trying those ideas and working to make them successful.

“Counties are forming task forces; people are coming together and adding their own talents, energy and expertise,” he said. “It’s only through collaboration with each other that innovation comes.”

The idea to bring Quinones to the forum was one borne out of a book read by local attorney John Basinger. He read the book on a recommendation from Entertainment Weekly.

“I thought the book was fantastic,” he said.

He said he sees the effects of drug addiction on a daily basis in the courtroom.

“It was very informative,” Basinger said of the book.

He shared the book with his parents, Margaret and Dale. Margaret shared it with her women’s group, which meets regularly. Karen South Jones, executive director of Youth Services Bureau and director of YSUP Rowan (Youth Substance Use Prevention in Rowan County), is a member of the women’s group.

When YSUP was writing its application for a community grant to address substance abuse, Jones and YSUP Program Director Liz Tennant began talking about how great it would be if they could have Quinones speak.

That idea came to fruition thanks to the grant, the Center for Prevention Services, the county, Cardinal Innovations Healthcare, and the town of Granite Quarry.

Jones said the thought to have Quinones speak coincided with the idea to have a second opioid forum.  The ultimate goal of another forum was to be able to provide information, Jones said.