Boston wins, despite 42 from LeBron 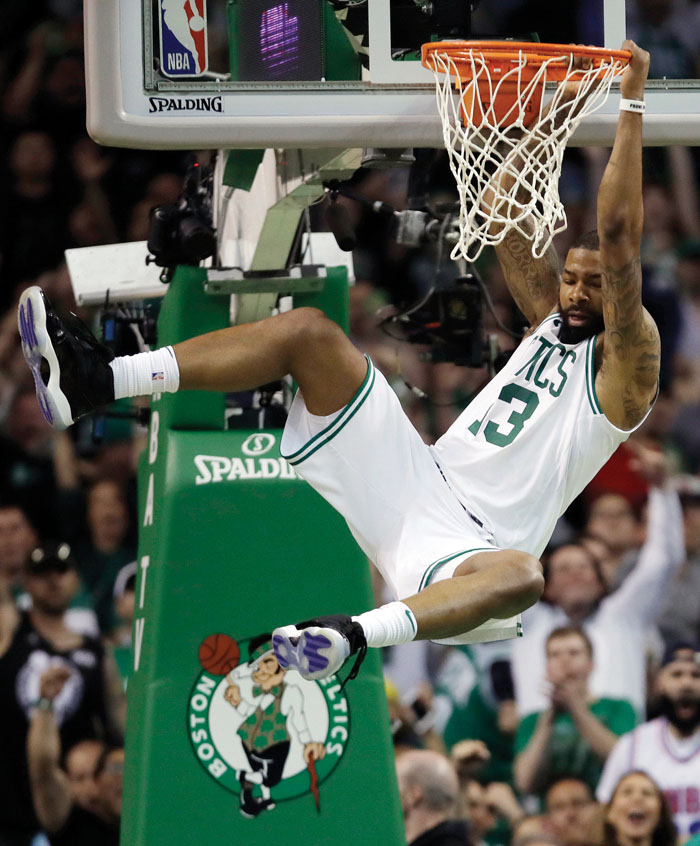 Boston Celtics forward Marcus Morris hangs from the rim after dunking against the Cleveland Cavaliers during the first half in Game 2 of the NBA basketball Eastern Conference finals Tuesday, May 15, 2018, in Boston. (AP Photo/Charles Krupa)

BOSTON (AP) — Jaylen Brown scored 23 points and the Boston Celtics withstood a 42-point night by LeBron James to beat the Cleveland Cavaliers 107-94 on Tuesday and take a 2-0 lead in the Eastern Conference finals.

Boston improved to 8-0 this postseason at TD Garden. The Celtics have never blown a 2-0 series lead in the playoffs.

James added 12 assists and 10 rebounds. He scored 21 of Cleveland’s 27 points in the first quarter , tying his playoff career high for points in a period. His 42 points marked his fifth 40-point game of this postseason. James had just 15 points and missed all five of his 3-point attempts in the Cavs’ Game 1 loss.

But he didn’t seem to play with the same force after straining his neck in a first-half collision and the Cavaliers wilted in the second half, with the Celtics outscoring them 59-39.

Kevin Love finished with 22 points and 15 rebounds for Cleveland.

As expected, Tristan Thompson started in place of Kyle Korver in the hopes his presence could energize what was a sluggish Cavs offense in Game 1. Thompson got Cleveland’s first basket of the night and helped to limit Horford’s effectiveness on the inside early on.

Korver added 11 points off the bench for Cleveland. But starters Thompson, JR Smith and George Hill combined for just 11 points on 5-of-17 shooting.

Tempers flared with 3:49 to play with Boston leading 97-89. Marcus Morris got in Smith’s face after Smith pushed Horford in the back to prevent a layup. Smith shoved Morris and the pair had to be separated.

Smith was assessed a flagrant foul and both received technical fouls.

Boston led 84-77 after three quarters and took command late in the fourth with the Cavs getting little offense other than from James. Cleveland’s starters were pulled with 1:48 left and the Cavs down 14. They sat more than seven minutes to conclude Game 1.

James was on the attack from the opening tip. He turned the ball over the Cavs’ first possession. But it was one of his only miscues in the first quarter.

James was also astoundingly efficient, using his dribble to create space, while he knocked down an assortment of jump shots.

He finished the opening quarter 8 of 13 from the field and 4 of 7 from the 3-point line.

His momentum was stunted briefly at the 3:50 mark of the second quarter, when Tatum was whistled for a foul after catching James jaw with his shoulder as he attempted a steal. James stayed in the game and connected on one of his ensuing free throws, but then exited to the locker room with Cleveland leading 47-36.

The Cavaliers said James had a neck sprain. He returned after missing less than two minutes of game time.

Boston flurried just before the half, getting six points from Morris in the final minute to trim Cleveland’s lead to 55-48 at the break.

Trailing 61-52 after a basket by Love, the Celtics scored seven straight points to make it 61-59, then used a 15-7 spurt to take 74-71 lead, their first of the second half. The two runs included 11 points by Rozier and six by Morris.

Game 3 is Saturday in Cleveland.