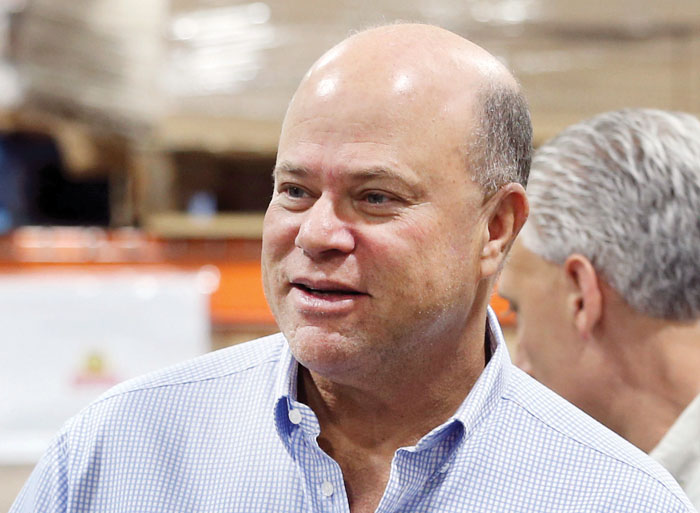 FILE - Int his May 10, 2016, file photo, billionaire hedge fund manager David Tepper mingles during a grand opening of rock star and philanthropist Jon Bon Jovi's Jon Bon Jovi Soul Foundation Soul Kitchen and B.E.A.T. Center, which stands for Bringing Everyone All Together, in Toms River, N.J. People familiar with the situation say Tepper has agreed to buy the Carolina Panthers from team founder Jerry Richardson for a record $2.2 billion. The people spoke to The Associated Press on Tuesday, May 15, 2018, on condition of anonymity because the team has not yet announced the sale. The purchase is subject to a vote at the NFL owners meeting next week in Atlanta. (AP Photo/Mel Evans, File)

CHARLOTTE (AP) — The Carolina Panthers are being sold for an NFL-record $2.2 billion.

Hedge fund manager David Tepper has agreed to buy the Panthers from team founder Jerry Richardson, two people familiar with the situation said Tuesday. The people spoke to The Associated Press on condition of anonymity because the team has not yet announced the sale.

The purchase is subject to a vote at the NFL owners meeting next week in Atlanta.

Richardson announced in December he was selling the team amid an NFL investigation into sexual and racial misconduct in the workplace. That decision came after a report by Sports Illustrated detailing Richardson’s alleged misconduct.

The league’s investigation into the allegations is still ongoing.

The price tag is the most ever paid for an NFL franchise, eclipsing the $1.4 billion the Pegula family paid to purchase the Buffalo Bills in 2014.

Ben Navarro, the founder and CEO of Sherman Financial Group, was considered Tepper’s biggest competitor in the bid to purchase the Panthers. He conceded Tuesday that he’d lost the bid.

“My family and I are grateful to have had the opportunity to be included as a potential buyer of one of the premier assets in all of the Carolinas — the Panthers football team,” Navarro said in an email to The Associated Press. “It would have been a privilege to become the stewards of this iconic franchise to ensure its home remains in the Carolinas where it belongs, to establish a new era of leadership and excellence on and off the field, and to leverage the team’s NFL platform to further our quest to help all children gain access to a great education.”

Tepper’s plans on whether the team will remain in Charlotte for the long-term future remain unclear.

The Panthers are tied to their downtown stadium through the 2018 season because of an agreement with the city. After that a new owner is free to extend the lease to the stadium, build a new stadium or possibly move the team.

Moving the Panthers out of Charlotte would seem to a longshot.

NFL Commissioner Roger Goodell said he would prefer to keep the team in Charlotte where it has been successful. The Panthers have been one of the NFL’s best supported teams with only two non-sellout games since the team began playing its home games in Charlotte in 1996.

Born and raised in Pittsburgh, Tepper, 60, is a part owner of the Steelers and founder and president of Appaloosa Management, a global hedge fund based in Miami.

Because he holds a 5 percent stake in the Steelers, Tepper’s finances already have been vetted by the league, meaning it wouldn’t take much for NFL owners to approve the sale. However, Tepper would have to sell his minority ownership stake of the Steelers, per league rules.

Tepper is known for his philanthropy.

He donated $55 million to Carnegie Mellon University’s business school in 2013. Tepper graduated from the University of Pittsburgh and Carnegie Mellon, where the Tepper School of Business is named after him.

Richardson was the first and only majority of the Panthers. He became only the first former player since George Halas to become an NFL owner when he was awarded an expansion franchise in 1993. Richardson promised fans at the time the Panthers would win a Super Bowl “within 10 years.” Carolina has reached the Super Bowl twice, including in 2015, but has never won.