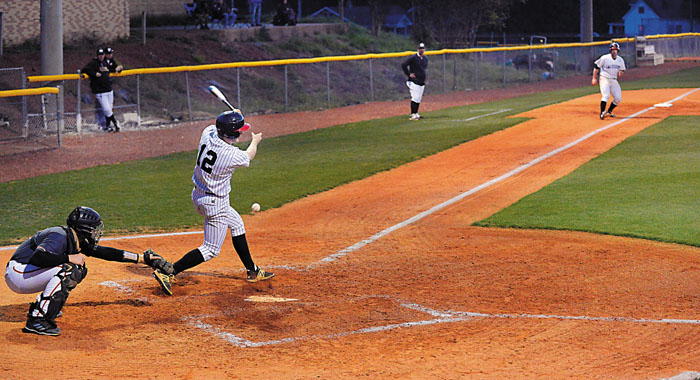 Wayne Hinshaw file/for the Post ... Salisbury’s Blaine Shellhorn, shown in an earlier game against North Davidson, had a double against the Black Knights last night in a 2A playoff loss.

The Hornets put their faith in the sturdy left-hander and their chock-full-o-hitters lineup, only to be disappointed, in a 5-1 loss at North Davidson in the third round of the 2A state playoffs.

“It’s all about mindset,” coach Mike Herndon said, moments after Salisbury (17-11) managed only three hits in a welcome-to-summer loss. “We expected to win. We wouldn’t have come here if we didn’t. We just picked a bad day to play bad.”

It was a clumsy, square-wheeled performance for SHS, a team that had won three of its previous four games and was earning straight A’s this month. Fisher — a hard-throwing, seven-game winner with curve appeal — wasn’t himself on the mound, yielding three earned runs and eight singles in four-plus innings.

“It’s hard to beat that left-hander anytime, much less beat him twice,” winning coach Matt Griffin said after North Davidson (22-4) advanced. “Salisbury’s a good, quality team with a lot of big wins this year. They beat Ledford. That guy Fisher has beaten us and Ledford. We knew there was only one way, and that was to grind this one out.”

It was an especially hard pill to swallow for Salisbury’s four seniors — Griffin Myers, Chandler Lippard, Will Taylor and Joe Steinman. They were part of teams that went 13-12 last season and 12-16 in 2016.

“I’m proud to part of a team that made it to Round 3,” said Lippard, who lined a leadoff single to left field in the top of the sixth inning. “I never won a Round 1 in my four years here.”

North opened the scoring against Fisher in the bottom of the second, when it cobbled together consecutive singles by Jackson Perrell, Nathan Burton and Mason Everhart. A misplayed double-play ball in the ND second unlatched the gate for two more runs. When Jake Brown paddled a base hit into left and Laflesh reached on a check-swing single to start the fifth inning, Herndon pulled Fisher.

“Jack wasn’t himself,” Herndon said after Fisher needed 70 pitches to record 12 outs. “We were a little concerned because he said he felt a little tight and got some treatment (Monday). Today he said he felt good, but we were keeping an eye on him.”

Steinman relieved and immediately fanned DH Maddox Johnson before a double steal put two runners in scoring position with one away. Perrell’s squeeze bunt made it 4-0 and another infield gaffe produced the Black Knights’ fifth run.

“The small-ball game was huge,” said Griffin. “They changed their lineup from what we had seen the previous three times we played them. Griffin Myers had played third base all three times and was like Brooks Robinson over here. He made every play imaginable. When they moved him to shortstop, we didn’t know this kid (Taylor), but we were determined to make him make some plays.”

In the meantime, North freshman Merritt Beeker kept the Hornets at bay with an assortment of off-speed serves. The left-hander wasn’t overpowering, but had what every pitcher craves — late movement on his fastball.

“He’s a good pitcher, but we beat him once already,” said Myers, referencing Salisbury’s 12-6 win over North in the CCC tournament semifinals on May 1. “He was on tonight. He was able to locate the ball and keep us off-balance.”

Lippard, who finished with a .452 batting average and 29 RBIs, had a similar reaction. “We didn’t jump on him quick enough,” he said. “He mixed it up and kept us guessing.”

Steinman officially pitched two innings of scoreless relief without allowing a hit. He scored the Hornets’ final run of the season when he reached on an error and crossed on a sixth-inning wild pitch.

“Am I disappointed? Yeah,” Herndon said. “Am I hurting? Yeah, I’m hurting. We got beat by a good team. Here’s what I’m proudest of: We’ve got this program going in the right direction. When I got here three years ago, the team didn’t believe it could beat Mount Tabor or West Rowan or this team. Now they believe they can beat anybody.”

NOTES: Salisbury’s Blaine Shellhorn had the game’s only extra-base hit, a two-out double into the left-field corner in the top of the second. … Fisher struck out four and walked one. … The Hornets had baserunners in every inning, but stranded 10 of them. … Third-seeded North improved to 14-1 at home with its third straight win. It will face the winner of the R-S Central (No. 2 seed) vs. Ledford (No. 10) in the fourth round. That game was postponed on Tuesday.