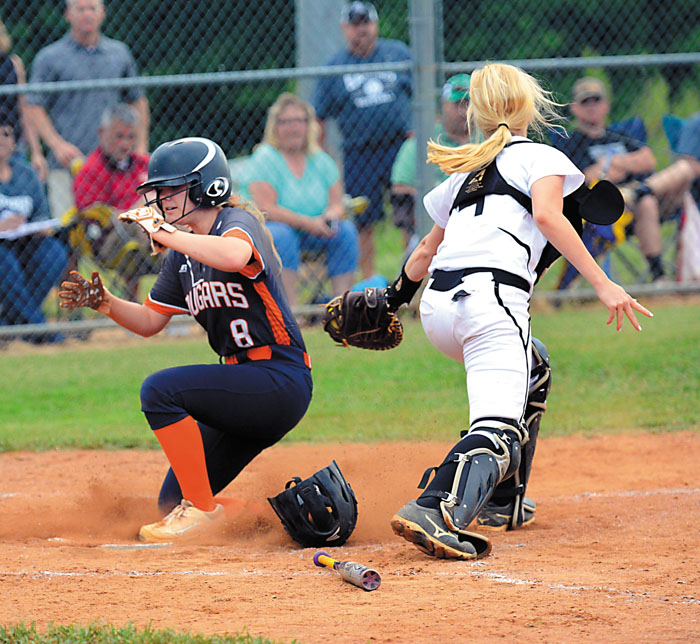 CHINA GROVE — Carson pitcher Rylie Stewart’s scoreless streak ended at 37 innings, and it ended with a loud bang when North Buncombe’s Lauren Allen socked a ball in the general direction of the moon in the second inning.

Still, the clock never struck midnight on Carson softball’s Cinderella story. Stewart didn’t suddenly turn into a pumpkin or anything like that. She just shrugged and calmly got the next batter out.

“Those solo homers are fine,” Stewart said. “They’re going to happen now and then. I threw a changeup that just sat there, and she hit it hard. But I wasn’t worried.  We were fine. That was one just run, and the way we’ve been hitting, I knew we’d get a bunch of runs.”

Stewart was right. Carson won with relative ease, 9-2, in the third-round 3A matchup. A pair of North Buncombe solo shots — losing pitcher Caitlin Griffin walloped the other one in the fourth inning — were  trumped by a parade of  Carson  hits — 10 singles and four doubles. Carson out-hit the Blackhawks, 14-3, and won for the 10th straight time.

“Our coaches told us not to worry about those homers,” Carson slugger Kaitlyn Honeycutt said. “We just needed to keep getting our hits, and we got some big ones. Our team doesn’t hit a lot of home runs, but that’s OK. Homers are individual. Getting those runs home with singles and doubles, that’s better. That takes teamwork.”

Fourth-seeded Carson (19-6) faced adversity early. A disputed call cost the Cougars a run in the bottom of the first, and the Cougars were down 1-0 following Allen’s blast when they batted in the second.

“I think we’ve learned we can only worry about things we can control,” Carson coach Charissa Duncan said. “We knew we couldn’t control what happened with the weather tonight and we couldn’t control the umpiring decisions. What we could control was what we did at the plate and on the field.”

The pivotal point was the bottom of the fourth. Griffin’s line-shot homer in the top of that inning made it 2-all, and the visitors had the momentum. Carson needed to score, needed to answer — and did.

Katie Jewell stepped to the plate with the bases loaded and two out. A right-handed power hitter, she usually pulls the ball, but she did exactly what she needed to do. She slapped one through the right side, two Cougars whirled around the bases, and Carson took control of the game.

“Well, it wasn’t as big of a hit as I wanted,” Jewell said with a smile. “But she kept pitching me outside, so I had to think back side. I  hit it in a pretty good place.”

Stewart needed to put up a zero in the fifth, and she did. One off-speed pitch got tagged hard for a single, but the Blackhawks didn’t score.

When freshmen phenoms Kary Hales and Liza Simmerson started the Carson fifth with bullets for doubles, it was 5-2. Then, with a runner at third base, Honeycutt didn’t try to do too much. She lofted the fly ball to left that Carson needed, and that sacrifice pushed the lead to 6-2.

The top of the sixth sealed it. Fifth-seeded North Buncombe (20-3) had two on with one out and had Kennedy Hensley, a dangerous, middle-of-the-lineup slugger at the plate. Hensley smacked it on a line, but it was right at Jewell, the shortstop. Jewell, who had made an amazing play in the first inning, not only made the catch, she made the easy flip to double the runner off second base. That sudden DP ended all hopes for a comeback.

“That play was smooth,” Jewell said.

In the seventh, the visitors went down 1-2-3. The last out was a nice one. Third baseman Jessica Freeze fielded a roller right on the line and whipped the ball to first baseman Simmerson, who stretched for the final out.

“We played with a lot of confidence,” Stewart said. “None of us have really been part of anything like this before, so it’s all new. We’re playing loose, and everyone is playing together and we’re all having fun. It’s going to take a really good team to beat us.”

Stewart said she won’t miss her scoreless streak. A streak like that leads to some pressure. Her coaches agreed that it’s a positive that it’s behind her. No one can throw shutouts forever.

Carson will get to play at home again in Round 4. Eighth-seeded Marvin Ridge knocked off No. 1 seed Parkwood on Tuesday in extra innings, so the Mavericks (22-4) will be traveling to play the Cougars. That game is scheduled for Friday.

“We played in the mountains in the first round of the playoffs last year, and we were tired when we got there,” Jewell said. “Playing these games at home this year has helped us. The crowd keeps us going.”

The other thing that’s changed for Carson, 15-12 last year and 5-16 the year before that, is getting clutch hits.

“That hit that Katie got tonight with the bases loaded and two out, that’s the hit we just couldn’t get last year,” Duncan said. “We’re playing with more confidence in big situations.”

All nine girls in Carson’s starting lineup got at least one hit against a pitcher who came in with a fantastic record. Hales had three hits. Jewell had two hits. Freeze got two hits and produced the bloop single that scored Carson’s first run. Honeycutt had two hits and drove in two.

Carson’s 19 wins are the most in school history.